That is the belief of Charles Marohn, an engineer and land planner working to reform American development patterns driven by consumerism. In his book Strong Towns: A Bottom-Up Revolution to Rebuild American Prosperity, he explains why post-World War II development—the creation of highway-oriented suburbs and the infrastructure “cult”—is a vast experiment resulting in the debt and decline that plague American towns. He advocates for a traditional town model scaled to pedestrian traffic where communities develop incrementally in the walkable street-grid way that has worked since ancient times. 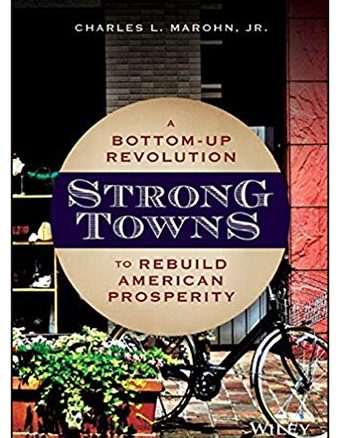 Eschewing progressive disdain for the past, Marohn proposes we have much to learn from the wisdom of our ancestors in town planning. He examines the social breakdowns of the last seventy years through an unusual lens: the societal shift to sprawling car-dependent suburbs instead of incremental growth outward from a town center. This has had devastating effects: the flight of the affluent to the suburbs, trapping the lower classes in deteriorating core neighborhoods; overdevelopment and maintenance backlogs as cities are stretched thin servicing broader areas with less money.

A traditional town block of small businesses yields more tax revenue and local economic stimulus than does a new and shiny highway-oriented drive-thru franchise in the same space; and yet town planners routinely favor such new developments. Marohn founded his Strong Towns organization to challenge these standards. His is not the “urban renewal” hobby of the wealthy. Rather, he seeks to revitalize local communities, especially “old and blighted” areas, often populated by minorities and those without easy access to a vehicle.

Marohn’s argument may be a bitter pill for those who conflate post-WWII American prosperity with core conservative values or the American dream. Shiny new developments, car dependence, zoning that effectively separates income classes, and cul-de-sacs cut off from the town center: these things, while in the middle class comfort zone, are not oriented toward mutual prosperity. They aggravate economic inequality, drive towns into the red, and undermine local industry. Marohn predicts that within three decades debt will force many towns to come to grips with this unsustainability. Many already are, such as Detroit—the first town designed around the automobile.

Marohn seems a man of common sense, full of Minnesota politeness, and he avoids singling out any demographic above others, neatly sidestepping political pigeonholing. Yet, despite his disinclination to be categorized, many of his proposals align closely with Catholic thought.

Marohn explicitly recommends the Catholic idea of subsidiarity, dealing with matters on the lowest level possible. In that spirit, his proposals are not grandiose or concerned with national policies, but rather with neighborhood charity. He opposes grand solutions enacted all at once to a finished state—a process which does not allow for error or readjustment. Top-down planning, the default American model, disrespects the wisdom and autonomy of the common man to adapt his environment. Marohn proposes instead a four-step approach: observe where people in the neighborhood struggle daily, identify the next smallest thing that can be done immediately to address that struggle, do that thing right away, and repeat the process. Repair a sidewalk, paint a crosswalk, fix street lights, plant trees, install benches, lower the speed limit. This approach requires a humility that isn’t often invited to planning committees.

Consumerism and individualism completely restructured human habitats over the last sixty years, undermining community life. This pattern is reflected in everything from the big box stores replacing mom-and-pop shops, to zoning regulations and overdevelopment, to tax breaks that subsidize big business. Consumerism is not just a deadly flaw in the modern mindset; Marohn explains how it has harmed the actual structures of our towns.

In the final chapter, Marohn reflects on the relationship between town layout and virtue. He recounts a visit to a community of Hasidic Jews, and how their living spaces reinforced their virtues. This is not so for most of America: suburban development plays to our vices, avarice and selfishness and desire to turn a blind eye to blighted areas.

“The United States is a secular nation,” he writes, “and as an American citizen, I am firmly committed that it remains that way. Even so, it’s clear that as our religiosity fades, there is no cultural structure providing equivalent meaning and guidance for our lives. There is no common purpose, no unifying set of moral beliefs, that binds us together as people…. The only common cultural practice consistently reinforced by the structure of the places we’ve built today is consumption.”

This should make a lightbulb go on for Catholics who, while recognizing societal breakdown, have not considered the moral implications of how their towns are built. Rebuilding virtuous communities requires a careful consideration of the places we live. Suburban housing connected only by highways that lead mainly to big box stores have an ethos entirely distinct from a traditional town pattern, where men live, work, pray, eat, and collaborate in a connected structure, one they can easily walk about in, not isolated in automobile pods.

Marohn’s arguments make for some hard choices for a nation already facing political divisions and cultural sea changes. Most people have limited housing options and need vehicles. Yet experience confirms a vast difference between life in walkable towns and life in subdivisions off a highway. In a highway-accessed suburb, interactions are limited to a few neighbors, who only spend occasional time walking pets or manicuring yards; anything else requires a car. This heavily buffered experience cuts us off from the town we ought to call “home.” Small wonder that culturally such developments have produced little besides contentious HOAs. By contrast, in a walkable town, daily life is more connected to place, which roots identity and local commitment. Pedestrian access to local events, food, places of worship, to visit family or friends, to shared communal spaces like a main street, library, or park, gives life to a town and fosters community virtues. And certainly, it can affect one’s faith to walk past one’s church everyday instead of needing to hop on a highway to reach it. Even if it means smaller living spaces, such a life strengthens the sense of belonging. In an age of dislocation, is it any wonder that rising generations gravitate more toward walkable towns and less toward the gated cul-de-sacs that were the Boomer ideal?

Strong Towns is not a “Catholic book,” but its emphasis on subsidiarity, community, humility, and charity is so sympathetic to the Catholic worldview it is little surprise when near the end Marohn reveals his Catholic faith influences his work. In his love for his hometown and cry to take pride in our streets and push back against the consumerist highway culture that literally bypasses communities, there are echoes of The Napoleon of Notting Hill, Chesterton’s novel about fighting for one’s neighborhood. He sees a return to town planning orthodoxy as a path to restoring not merely local economies but also neighborliness, an answer to modern loneliness and isolation.

“You cannot upset all existing things, customs, and compromises, unless you believe in something outside them, something positive and divine,” wrote Chesterton in Notting Hill. A Strong Towns revolution requires believing that our towns are more worth our attention than distracting national headlines. After all, Christ said to “Love thy neighbor”; charity as a virtue begins with loving the humans next door.

Our habitats either reinforce or undermine our attempts to build virtuous lives. Currently, American towns are built to support consumerism, not fruitful community life. Marohn’s proposals—contrary as they may run to American habits—deserve to be heard. Catholics who care about subsidiarity and charity should take note. Maybe it’s time to forgo obsessing over national politics and start changing our immediate communities. Strong Towns gives us the blueprint to do that.

About Lauren Enk Mann 17 Articles
Lauren Enk Mann obtained her B.A. in English Language and Literature from Christendom College. An avid fan of G.K. Chesterton, she writes about film, pop culture, literature, and the New Evangelization.