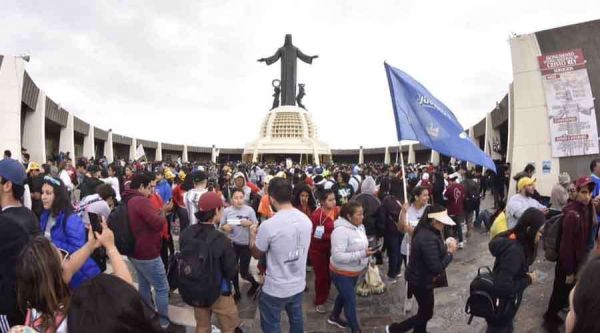 During the 1920's the country's government in power initiated a series of repressive measures and outright persecution against the Church. The Mexican government banned religious orders, restricted public worship, and prohibited priests from wearing clerical attire in public.

Young people “not only want to announce God's plan with our witness but also bravely denounce the injustices and outrages that are committed daily in our country, outrages that on many occasions have led to the loss of peace, tranquility and even the lives of thousands of Mexicans,” organizers said.

“We young Catholics of Mexico are tired of the situation our homeland is going through. It's disturbing to be in a country where the authorities say they are for peace but routinely show their interest in legalizing the assault on the lives of the innocent that are still in their mothers' wombs,” a spokesman for the movement said.

Young Mexicans “want to publicly take up our role as builders of peace and as defenders of our faith and our principles. We know this is not simple but we're aware of the urgency of doing this.”

“As Mexican society it's necessary to combat all those situations of corruption, impunity and illegality that generate violence and reestablish conditions of justice, equality and solidarity that build peace,” the spokesman said.

A version of this story was first reported by ACI Prensa, CNA's Spanish-language news partner. It has been translated and adapted by CNA.

Motorcyclist in Colombia crashes through church door at full speed

A motorcyclist crashed into the wooden door of Our Lady of Valvanera Church in Bogotá, Colombia, on July 25, 2022. There were no serious injuries reported. / Credit: Twitter screen shot / Arriba BoBogotá Citytv