Students of the Sacred Liturgy, liturgical “practitioners,” and liturgy buffs alike will recall works by Bishop Peter J. Elliott like Ceremonies of the Modern Roman Rite, Liturgical Question Box, and Ceremonies of the Liturgical Year. Bishop Elliott has now come forward with a new work (which encompasses much of that first volume) and also takes into account the so-called Extraordinary Form in Ceremonies Explained for Servers: A Manual for Servers, Acolytes, Sacristans and Masters of Ceremonies. In his previous liturgical forays, our author set a very high bar; he does not disappoint this time around, either. 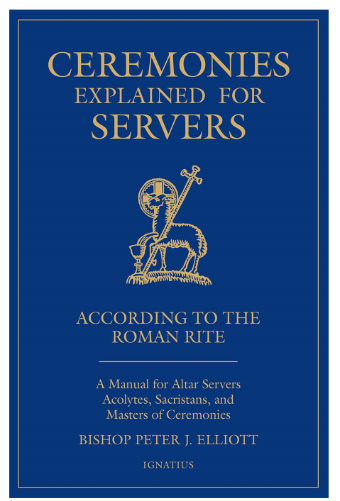 The Bishop’s early formation came from the Anglican Tradition, historically known for its attention to divine worship. Coming into full communion with the Catholic Church as a young man, he began studies for the Sacred Priesthood and eventually found his way to Rome for doctoral studies at the John Paul II Institute for Marriage and the Family at the Lateran University, which prepared him for his eventual work in the Pontifical Council for the Family, where I had the good fortune of meeting the man, who has been a dear friend and collaborator for decades. Upon returning to his native Australia, he took up work in the education apostolate and was named an auxiliary bishop of Melbourne.

He has become most known, however, because of his liturgical commitment, which has included service as a consultant for the Vatican Congregation for Divine Worship and the Vatican commission that prepared the Anglican Use for the Personal Ordinariates. The astute reader will notice that he has had no formal liturgical training beyond the normal seminary curriculum. I highlight this fact to make an important point: One does not need a doctorate in liturgy to know how to execute the sacred rites. In truth, all one really needs is a well-grounded sense of the sacred, the ability to read the basic guidelines the Church gives us, and the willingness to put them into practice.

Rubrics—the directives written in red (ruber means “red” in Latin)—are not intended to stiﬂe personality or creativity; on the contrary, they are the fodder for genuine creativity, providing the parameters within which one can make the liturgy truly come alive for God’s People. And so, it is commonplace for clergy faithful to the rubrics to say (half-jokingly): “The rubrics are our friends!” And to take as sound advice, “Say the black and do the red.” If that mentality is accepted by the priest, it necessarily filters down to the servers.

The importance of service at the altar struck me as a child of six or seven, so much so that I approached Sister Rita Gertrude in the second grade, asking if I could join the ranks of the altar boys (yes, we actually had four cohorts of servers, increasing in importance, complete with vesture proper to each). Sister kindly replied that it was necessary at least to have made one’s First Holy Communion but even then, third or fourth grade was the more usual time to begin. The Monday after my First Communion, I again approached Sister about serving; she reminded me that that usually did not happen in second grade. Undaunted, I pressed, “But you said ‘after First Holy Communion,’ which I made last Saturday!” Not wanting to be worn down by my persistence, she dug out of her drawer the four-ply vinyl card with all the server’s responses in Latin. As she handed it to me, she said, “When you have the ‘Suscipiat’ memorized, come back and we’ll see.” Old altar boys will recall that the “Suscipiat” was the ultimate acid test of one’s Latinity since it contains not a few tongue-twisters. Less than a week later, I tackled Sister Rita at recess with a flawless recitation of the response to the “Orate, Fratres.” Like the judge in the parable (see Lk 18:5), she probably feared that if she didn’t cooperate I would do her violence and so said with resignation, “Okay, go see Father O’Leary.” Running over to Father on the playground at lunch began a life-long love affair with the Church’s worship.

I share that autobiographical anecdote because it underscores the seriousness with which service at the altar was imbued in that era. Recapturing that attitude is clearly the goal of Bishop Elliott’s new book. Thus, popping off the pages are words like “sacred duty”; “reverent, efficient, and beautiful”; “craft”; “careful”; “discipline, decorum, and piety”; “orderly and smooth”; “beautiful, peaceful, and prayerful”; “dignity.” As should be easily seen, the author provides servers with a theology of the liturgy and with a spirituality of serving.

This user-friendly text (it is indeed a text) has numbered paragraphs for easy reference. The work provides the server with the necessary proper terminology, along with guides to gestures and movements. The entire gamut of Catholic worship is considered: Holy Mass, sacraments, funerals, Eucharistic devotions, Liturgy of the Hours, the rites of Holy Week, pontifical liturgies, and other incidental ceremonies, as well as an introduction to the Mass of the Extraordinary Form of the Roman Rite. Of course, if the priest is the “formator” of servers, the directives and attitudes presented in this book will redound to his own ars celebrandi.

What becomes clear is that Bishop Elliott firmly believes that the Church’s liturgical norms protect our ofﬁcial, communal worship from banality, the imposition of idiosyncrasies, and material heresy, ensuring that it does not become the private possession of any one person but remains the treasure of the entire Catholic community. Many of our liturgical problems are linked to the onset of “modernity,” which has brought about a casualness and even a carelessness in regard to sacred affairs. Saint John Henry Cardinal Newman saw this phenomenon brewing already in the nineteenth century and had some sage observations worth citing here:

Thus the usages and ordinances of the Church do not exist for their own sake; they do not stand of themselves; they are not sufﬁcient for themselves; they do not ﬁght against the State their own battle; they are not appointed as ultimate ends; but they are dependent on an inward substance; they protect a mystery; they defend a dogma; they represent an idea; they preach good tidings; they are the channels of grace. They are the outward shape of an inward reality or fact, which no Catholic doubts, which is assumed as a ﬁrst principle, which is not an inference of reason, but the object of a spiritual sense.1

To believe, and not to revere, to worship familiarly, and at one’s ease, is an anomaly and a prodigy unknown even to false religions, to say nothing of the true one. Not only the Jewish and Christian religions, which are directly from God, inculcate the spirit of “reverence and godly fear,” but those other religions which have existed, or exist, whether in the East or the South, inculcate the same. Worship, forms of worship—such as bowing the knee, taking off the shoes, keeping silence, a prescribed dress, and the like—are considered as necessary for a due approach to God.2

Let us . . . be at least as exact and as decent in the service of God, as we are in our persons and our own homes.3 (On second thought, that might not be sage advice in our contemporary “cult of the slob!)

The Church herself makes a point of underscoring the importance of fidelity to liturgical norms as we read in the General Instruction of the Roman Missal:

The gestures and bodily posture of both the Priest, the Deacon, and the ministers, and also of the people, must be conducive to making the entire celebration resplendent with beauty and noble simplicity, to making clear the true and full meaning of its different parts, and to fostering the participation of all. Attention must therefore be paid to what is determined by this General Instruction and by the traditional practice of the Roman Rite and to what serves the common spiritual good of the People of God, rather than private inclination or arbitrary choice. (n. 42)

In other words, this is not an empty exercise in “ritualism” or “externalism,” such as Our Lord castigated. Indeed, Cardinal Newman responds to such concerns head-on precisely by citing Luke 11:42:

This is what He [Jesus] condemned, the show of great attention to outward things, while inward things, which were more important, were neglected. This, He says Himself, in His denunciation of the Pharisees, ‘These ought ye to have done,’ He says, ‘and not to leave the other,’ the inward, ‘undone.’ He says expressly they ought to do the outward, but they ought to do more.”4

Not infrequently, one hears the remark from those on both extremes of the Catholic spectrum that the so-called Novus Ordo has no rubrics. Well, someone forgot to inform our author of that because he has found over 300 pages of them, for servers alone! Admittedly, the pre-Vatican II rites had many more directives (not a few of which were regularly ignored by celebrants whose disobedience was largely unobserved by the laity due to the language or position of the priest). That said, there are indeed rubrics in the Ordinary Form of the liturgy; the problem is that all too many either don’t know them, don’t care to know them, or refuse to obey them. One can say that having fewer rubrics today ought to make one all the more observant.

All too often, one hears the charge that concern for such matters as these reveals a legalism and rigidity that “Vatican II” sought to banish. Or, that these “little things” ought not engage us with so many greater concerns pressing upon us. Our Lord, however, taught us that one who is faithful in small matters will be faithful in greater ones (see Lk 16:10). And St. Teresa of Avila reminds us that “trifles make for sanctity.” I think that’s the big take-away from Bishop Elliott’s current effort.