As one may expect of any institution with a 2,000-year history, there is no shortage of myths and misinformation regarding the history of the Catholic Church. There are tales of intrigue and espionage; conspiracy theories about Knights Templar and midnight assassinations; misunderstandings about Constantine, the Crusades, and the Spanish Inquisition; not to mention broad mischaracterizations of Catholic theology and teachings.

A new series from Ave Maria Press aims to be a sort of corrective to the many centuries of what it calls “half-truths and noble lies.” The series, Reclaiming Catholic History, is edited by Mike Aquilina, the prolific writer, speaker, and Church historian. 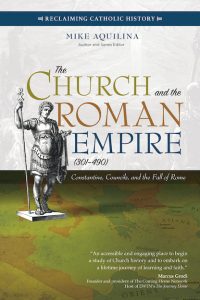 Aquilina is also author of the first volume, The Early Church (33-313): St. Peter, the Apostles, and Martyrs (Ave Maria Press, 2019). The series will ultimately consist of seven titles, covering the early Church, the Roman Empire period, the Dark Ages, the Middle Ages, the Reformation, the Age of Enlightenment, and the Modern Age. Aquilina recently spoke with Catholic World Report about the series, including the first volume, and the challenges of writing Church history.

Catholic World Report: Tell us how the book and series came to be. What was the genesis of this series?

Mike Aquilina: The publisher approached me with the idea. It was shortly after the release of my book A History of the Church in 100 Objects, which I co-authored with my daughter Grace. I think we were all surprised by the response to that book. Nobody’s supposed to like history! It was the subject of those dreaded quizzes in high school. It was the blur of memorized dates, from 1492 to 1776. Yet here we were celebrating the sales of a thick book that was all about history.

Admittedly, that book was popcorn. The chapters were very short and dominated by pretty pictures, and each one told a vivid, true story with lively characters. But I think the publisher, Ave Maria, saw that there was a potential audience for histories that moved at a pace that was just a little less rapid, but still told great stories.

So they asked me if I could assemble a team of writers for such a series—one that took our two millennia and considered it one era at a time. I’m Sicilian, and I know when I’m facing offer I can’t refuse.

CWR: You are the series editor—what does that entail?

Aquilina: I helped set the standards and formats, and I wrote a general introduction for the series. I also also helped to identify and recruit the writers. I try to communicate clear expectations to the authors up front—but then I get out of the way. The books are best when the authors feel the freedom to tell the stories. I also review the manuscripts once they’re done.

CWR: Why is there a need for such a series? In what sense does Catholic history need to be reclaimed?

Aquilina: Americans today are profoundly ignorant of history. Our collective memory begins approximately with the last season of Seinfeld. Studies show that most people can’t identify which came first, the Revolutionary War or the Civil War.

Catholics are doubly ignorant because we weren’t taught our own history in the first place. In fact, we were fed misinformation about our history—the urban legends and propaganda generated by the Reformation and post-Enlightenment secularism. I can’t tell you how often I’ve heard—from professing Catholics!—that Constantine invented the Bible, or that the Crusades were naked acts of aggression, or that the Eucharist is a fourth-century invention.

Stockholm syndrome is the condition that causes hostages to develop an unwarranted sympathy with their kidnappers. I think we have a bad case of it.

Biblical religion is by nature historical. We’re not about “once upon a time.” We worship a God who interacted with specific people in particular ways on particular dates and in places you can find on a map.

Our past is among the most precious gifts God has given us, and we must not allow ourselves to lose it. Our faith is the “faith of our fathers,” but we believe they’re living still. We’re supposed to live in relation to them.

These are the big reasons we want to reclaim history.

CWR: Some might say, “What’s the point? So a lot of people firmly believe erroneous things about the Catholic Church. Big deal.” How would you respond to that?

Aquilina: It’s not so long ago that those errors empowered the Ku Klux Klan to burn crosses on the lawns of Catholics—and find other ways to harass us. One of my great mentors had this happen to his family when he was young.

Bigotry depends on ignorance. And bigotry is the precursor to oppression and persecution. Don’t laugh. This happened rather rapidly in Christian lands throughout Europe last century—in Spain during the Spanish Civil War, in Germany, in the lands of Eastern Europe. Ignorance of history empowers bigots still today. I do think that’s a big deal and getting bigger every year.

Aquilina: We can acknowledge our mistakes and sins and account for them by our doctrine of original sin. We can also recognize a providential Hand that brings about good in spite of human failings.

Every history has a meta-narrative. Every historian has hidden assumptions, whether or not he acknowledges them. We, as Catholics, can be open about ours, which are at least as coherent and cohesive as any others.

CWR: In writing this book, and editing the series (so far), have you learned anything? Has there been anything that really surprised you?

Aquilina: Every story brings surprises—new flashes of insight—when it’s told well. That’s why we chose writers who were not only deep in history, but also adept at storytelling. So I have to say that even the most familiar stories arrived as news when I read them in the books that have been produced so far.

CWR: How were the topics of the seven books chosen? Were there any topics or periods that were considered, but ultimately turned down?

Aquilina: We wanted to tell the whole story, so we divided the two millennia into the eras familiar from high-school and college history: Dark Ages, Middle Ages, Reformation, Enlightenment, and so on. Some historians will contest the divisions and the titles, and we have to admit that every division is artificial. They’re imposed by later historians in retrospect. No one in the 13th century thought: “I’m living in the Middle Ages.”

Some historians, in fact, reject the titles and claim that the titles themselves are anti-Catholic. “The Reformation” seems to grant the claims of Martin Luther, which are at least debatable if not dubious. “The Enlightenment” implies that a general darkness prevailed until secularism arrived. And “Dark Ages” certainly has negative connotations.

We decided to go with standard terminology because it’s familiar to most readers out there. Many people can situate the Dark Ages on a timeline. Hardly anyone can place “Late Antiquity.”

CWR: What can we expect from the rest of this series?

There was a time—long, long ago—when librarians believed that an important part of their role was to protect patrons from objectionable reading materials. Keeping books like Lady Chatterley’s Lover, Ulysses, or Tropic of Cancer under […]

“Life is very complicated, and only God knows.”

“Life is very complicated, and only God knows.” With these words, the hero of José Luis Olaizola’s General Escobar’s War might well be summing up his own unusual life and career. For life is complicated […]

The victims of divorce speak

Two new books written by Catholic authors—Primal Loss: The Now-Adult Children of Divorce Speak by Leila Miller, and Marriage and Equality: How Natural Marriage Upholds the Ideal of Equality for Children by Jennifer Johnson—explore the […]