The Bible is recognized and revered as the Word of God by more than 2 billion Christians around the world. Yet one of the main points of contention between Catholics and Protestant Christians has been the Bible. The perennial Protestant question is, “Where is that in the Bible?” 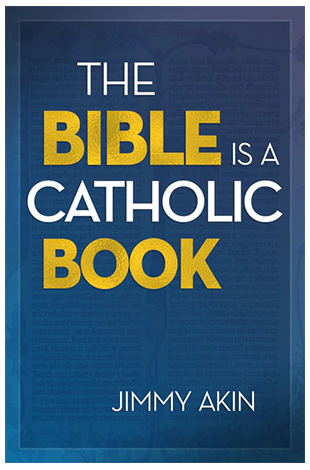 One response is to point to how the canon was formed. Where did the Bible even come from? This is not just a question of authorship, but of provenance: how do we know that these books are divinely inspired, and others are not?

Jimmy Akin, senior apologist at Catholic Answers and prolific author and commentator, has written a new book that addresses this very question: The Bible Is a Catholic Book (Catholic Answers, 2019).

Since converting to Catholicism in 1992, has spent over 25 years explaining this and many related points to listeners, readers, and debate opponents. He recently spoke with Catholic World Report about his new book, the importance of Catholics having an appreciation for Sacred Scripture, and the question of the authority of the Catholic Church.

CWR: How did the book come about? Did you bring the idea to Catholic Answers, or were you asked to write the book?

Jimmy Akin: The answer, basically, is both. I’ve been wanting to write a popular-level book on how we got the Bible for many years, and I learned that Catholic Answers was simultaneously looking to add such a book to its line, so it was a happy coincidence.

CWR: As a convert to the Catholic faith, was the question of the authority of (and the authority behind) Scripture particularly personal for you?

Akin: Yes. When I was an Evangelical, the subject of biblical authority was crucial. According to the standard Protestant view, we are supposed to form our doctrine “by Scripture alone” or sola scriptura. However, this makes the question of what counts as Scripture a critically urgent question. As I began to study these issues more deeply, I came to realize that there were two major problems with the Protestant position.

First, if we have to prove every doctrine by Scripture alone then we will need to do that for sola scriptura. However, there are no verses that either say or imply that we should do this, which makes sola scriptura a self-refuting doctrine. It doesn’t meet its own test.

Second, the Church was unmistakably the instrument through which God gave us a knowledge of which books belong in the Bible, but this determination wasn’t made until several centuries after the time of Christ. Yet if we must trust that God guided the Church to make an infallible decision centuries after the apostolic age when it comes to the contents of the Bible, we need to trust that God can guide it into infallible decisions on other matters as well.

CWR: Over the years you have had many debates with Protestants, and of course, the issues raised in those debates often touch on Scripture. Did this make it easier to write the book?

Akin: Interactions with Protestants over the years certainly have led me to look closely at various biblical questions, but they’re not the driving factor in the case of this book. The fact is that I’m just fascinated by the subject of how the Bible came to be. I love detective stories, and this is a great one. I love piecing together the clues and seeing the overall picture that builds up about how the Bible came to be. Like any good detective story, it has lots of twists and turns and surprising, unexpected conclusions.

CWR: A casual reader may see the title of the book and think, “Why does it matter if the Bible is a Catholic book or not?” What would you say in response?

CWR: Would you say there is a lack of sufficient familiarity with Scripture among many Catholics? And even a lack of a thirst for Scripture?

Akin: It’s unfortunate that so few Catholics take an interest in the Bible, and even those who do are often given materials that don’t really help them understand it. In recent years, the faithful have been given homilies that often consists of pious platitudes, and many recent Catholic books are obsessed with dissecting the biblical books into hypothetical sources. Neither of these help people build a knowledge of the Bible and what it means.

CWR: Why is it important for Catholics to engage with Scripture?

Akin: The Bible is a unique expression of the word of God. While Tradition also contains the word of God, and while the writings of the pope and the bishops help us understand the word of God, only Scripture is divinely inspired. As St. Paul says, it is breathed by God himself. It is his word to us, which makes it a precious and irreplaceable resource that speaks to the core of our faith. As St. Jerome said, “Ignorance of the Scriptures is ignorance of Christ.”

CWR: In the course of your research and writing, did you learn anything that surprised you? Did you draw any conclusions that had never occurred to you before?

Akin: This is a subject I’ve studied enthusiastically for years, so I didn’t discover anything major during the process of writing the book. However, there are a lot of things in it that will come as a surprise to many readers. These include things such as the surprising way ancient books and letters were produced, how the fantastically high price of books in the ancient world affected the writing of the Bible, how St. Paul’s letters are strikingly different from other ancient letters, how there’s a very good case to be made that all four of the Gospels were written between A.D. 55 and 65, and how there were books that some early Christians thought should be in the Bible even though they ultimately weren’t included.

Akin: The Bible Is a Catholic Book is available in multiple formats. To help people distribute it widely, Catholic Answers is making it available in bulk so that when you buy a case of 20 copies at catholic.com, you get them for only $3 each. That way you can give them to friends and family, use them as Christmas presents, hand them to door-to-door missionaries, start a study group, or put them in your parish vestibule. It’s available in paperback, in Kindle format, and as an Audible audiobook that I narrated myself. [Editor’s note: The Bible Is a Catholic Book is also available from Ignatius Press.]