It is a rare enough book which calls attention to a set of facts which are crucial to an accurate understanding of a given period of history and yet widely overlooked. Giuliana Chamedes’ A Twentieth-Century Crusade: The Vatican’s Battle to Remake Christian Europe is, therefore, a somewhat special treat, recounting no fewer than three (admittedly interrelated) stories which have long needed to be told:

1) The important role which the Catholic Church continued to play in European politics from 1914-1945, a period which it is often thought to have been politically marginalized;

2) the historical context within which the Vatican responded to the rise of Nazism, a context which did not foresee the events which took place from 1939-1945; and

3) the Vatican’s shift, between the end of World War II and the Second Vatican Council, from an alliance with Continental European nationalists to an alliance with liberal democracies oriented towards the United States. 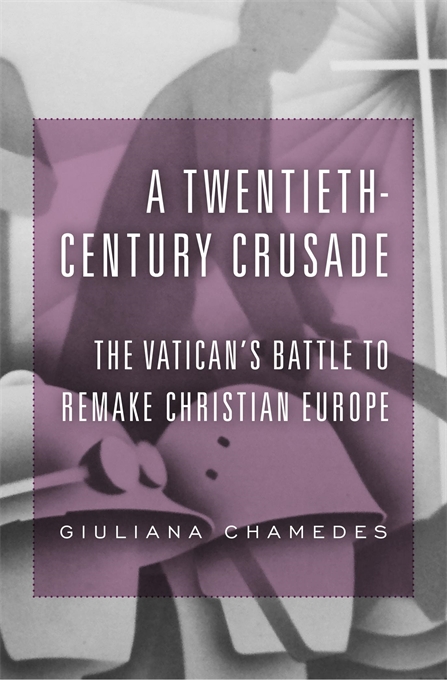 As the remnants of the old Christian political order of Europe were largely destroyed in the years surrounding the end of the First World War, the Vatican turned to political movements which combined elements of traditionalist conservatism and of nationalism. Its program was based on a distinction between, in philosophical terms, the “substance” of an explicitly Catholic (or at least Christian) political order and the “accidents” of the old monarchies. The new map of Europe and its new republics were accepted—enthusiastically, grudgingly or with indifference depending on the particular case—while the ideologies of classical liberalism, progressive liberalism, socialism, and communism were vigorously opposed.

The key to the “new Christendom” envisioned by the Vatican was the concordat, a form of agreement between the Holy See and a national government which had the legally binding status of a treaty under international law. Both the Church and the new governments had much to gain from such treaties. Not only was the Church’s freedom to pursue its mission, its property. and its finances legally secured but governments entering into concordats bound themselves to a political and legal order based upon Catholic moral principles, such as those concerning marriage, separation of spouses, and annulments.

Concordats also included formal recognition of the new governments’ legitimacy by the Church, assuring them the support of the substantial numbers of Catholics whom they governed and who might otherwise have been inclined to work for restoration of the fallen monarchies. The result was that new governments solidified their own power by allowing a degree of political power to the Church more reminiscent of the seventeenth century than of the late twentieth century.

Though opposed in varying degrees to all political philosophies not explicitly Christian, the Holy See saw socialism and communism as the primary enemies, partly because their atheism and their rejection of property rights made them some of the most radical enemies of a Christian political order but also because of the frequency with which attempted socialist and communist revolutions either temporarily gained power or relied on the use of armed force during the interwar period.

It is this anti-communist context that shed light on the attitudes of the Vatican to the rise of Nazism and the events which led to the outbreak of World War II. Most critiques of and most apologias for the actions of Pope Pius XII (Cardinal Pacelli before his election as pope) and of other leading prelates interpret their behavior through the lens of hindsight, assuming that their opinions and actions during the 1930s reflect their attitudes to the events which took place from 1939 to 1945. Though Chamedes is overly critical of such churchmen she does at least put their opinions and actions in the context of what was known in the 1930s rather than of what we know now. She paints a picture of men so preoccupied with the dangers of Soviet Russian expansion and of what they believed to be widespread communist conspiracies throughout the western world that they was willing to turn a blind eye to evils in Germany, which they would have vigorously opposed under other circumstances. In her view Pius XII’s wartime behavior was that of a man who was weak rather than complicit.

While I would not wish to endorse Chamedes’s interpretations in their entirety, they are not without points of merit. The Vatican did indeed overestimate the extent of communist infiltration into political life and the press, as well as of formal communist conspiracy. But such infiltration and such conspiracies were widespread enough for the Vatican’s beliefs to constitute an understandable exaggeration rather than near paranoia. It is also true that Vatican officials of the 1930s massively underestimated the degree of the danger posed by the Nazis. Such a grave error of judgment is more understandable than is now apparent: even a temporary German conquest of half of Europe appeared highly implausible until it happened, and long-term maintenance of such conquests seemed impossible. Unlike communist internationalism, a radical German nationalist movement could never attract support outside of its own “master race.” Belief that communism was the greater long term threat was valid enough, Hitler ruling Germany for twelve years compared to communists having (at the time of this writing) ruled much of the world‘s population for more than a century (and having at least as high a death toll per year in power).

Vatican assessments of international politics in the 1930s ultimately betray a rare example of myopic long-sightedness, correctly identifying communism as the greater long term threat while failing to recognize that Nazism was the more imminent one. And as for Pius XII’s own actions during the war, he himself spent the rest of his life wondering if he could have or should have taken firmer or more drastic action—an attitude which proves both his goodness and the reasonableness of suggesting that his judgment calls may have left something to be desired.

When World War II ended the coalition of traditionalists and nationalists upon which the Vatican had relied a quarter of a century earlier was no longer a viable political force on its own. Certain elements of it had either reluctantly cooperated or enthusiastically collaborated with the Axis. Others turned to an alliance with liberal democracy as the only viable alternative to fascistic, socialist, and communist authoritarianism, and it was with this new alliance that the Vatican associated itself. The history of this alliance provides essential background for interpretations of Vatican II’s Dignitatis Humanae, a document which does not represent a repudiation of earlier papal teaching (as celebrated by some disciples of John Courtney Murray and castigated by disciples of Marcel Lefebvre) but is, rather, grounded in a belief that the magisterial condemnations of classical liberal philosophy which prevent the Church from full reconciliation with classical liberal political orders do not prevent a pragmatic modus vivendi with them, or from recognizing areas of shared concern.

Though requiring careful, critical reading and disagreements with some of its interpretations, A Twentieth-Century Crusade is a well-researched and in many ways insightful work filled with little-known and rarely-discussed information essential to a deeper and more accurate understanding of Catholic history in the first half of the twentieth century.

The suspension was made at the request of the sosti… […]

Vatican City, Feb 10, 2019 / 08:15 pm (CNA).- Pope Francis on Saturday called on Italian judges to better society through their work, emphasizing the virtue of justice in building a healthy public life.

“We live in a context afflicted by tension… […]