Few things are more central to Christianity than missionary activity. Yet missionary work is never just about spreading the Christian faith. It inevitably has political, cultural, and economic dimensions. Some of Counter-Reformation Catholicism’s greatest missionary outreaches were intimately connected with the imperial goals of states such as Spain, Portugal, and France. 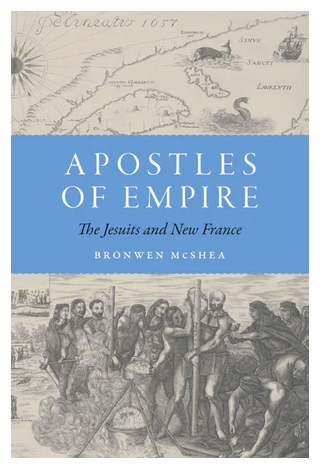 In France’s case, that missionary effort was focused during the seventeenth and eighteenth centuries on North America, or what was known as Nouvelle-France. At its most expansive, France’s empire in the Americas extended from the West Indies, to the Gulf of Mexico and Louisiana, through America’s mid-West, and encompassed the entire Great Lakes and all of eastern Canada up to and including parts of Newfoundland. One-third of the North American landscape was thus ruled by the King of France.

France’s American empire, however, never attracted anywhere near the same number of colonists as Britain’s east coast colonies. Maintaining France’s grip on these immense spaces necessitated close relations on the part of French colonial officials with the indigenous populations. This took the form of sophisticated political alliances into which France entered with various Native American nations. These proved remarkably effective at preserving Nouvelle-France from external aggression until Britain captured Quebec City in 1759 during the Seven Years War.

Part of the glue holding New France together was Catholicism and Catholic missionaries: most notably, the Jesuits. They were determined to convert Native Americans to Catholicism. Yet they were equally committed to furthering France’s political ambitions as those who led Bourbon France during its long eighteenth-century struggle with Britain for global hegemony. Explaining how Jesuits in North America and France spread the Catholic faith while simultaneously advancing the politics and economics of empire is the subject of a new book by the historian Bronwen McShea. Entitled Apostles of Empire: The Jesuits and New France, this text firmly establishes McShea as a leading contemporary scholar of French religious history.

The scope of McShea’s book is vast, above all in how it illuminates the various elements that initiated, supported, and protected Jesuit missionary activities in New France. She covers the mission from its beginnings in Paris in the early seventeenth century to its demise following the termination of France’s North American empire with the Treaty of Paris in 1763, the suppression of the Jesuits in France in 1764, and the papal suppression of the entire Society in 1773. McShea takes the study of this topic from its previously focus on the seventeenth century and explores the mission’s changing fortunes over a longer period.

Starting with the mission’s beginnings and most successful years. McShea shows how aggressive leadership from Jesuits in France and North America combined with carefully constructed relationships with France’s political and economic elites resulted in substantial success, both in terms of conversions to Catholicism and advancing France’s strategic interests.

To be sure, the Jesuits’ primary goal was to spread Christianity in the New World. McShea illustrates that there is not a trace of ambiguity about that. They weren’t there to “maintain a presence” or initiate interfaith dialogue. But the mission was also understood by the Jesuits as something which should be contributing to France’s geopolitical fortunes. This was tightly interwoven with what would prove to be a consistent motif of French colonialism: la mission civilisatrice. The Jesuits in New France, McShea writes, had no hesitation about imparting “courtly French aesthetics and ideas of civilité to North Americans.” For them, Christianization, French civilization, and “the cause of French empire” went hand-in-hand. This was underscored in their Relations de la Nouvelle-France: an annual report on the Jesuits’ activities in New France which gripped the imagination of France’s elites throughout the seventeenth century.

In this regard, McShea challenges and, to my mind, decisively refutes the legend (reinforced by films like the 1991 movie Black Robe) that the Jesuit mission in French America was somehow divorced from the French colonial project. No one who reads McShea’s book will be able to cling to the fairytale that the Jesuits were exclusively focused upon saving souls and protecting Native Americans from greedy French colonialists, or motivated by a “utopian escapism” underpinned by a fair amount of noble savage mythology. Even the willingness of Jesuits to die in pursuance of their mission was, McShea suggests, not just about giving glory to God; it also reflected their readiness to sacrifice for France in an age of emerging nation-states. The Jesuits had no misgivings about venerating those French soldiers and Indian warriors who died fighting valiantly “against enemies of the French.”

Indeed, one of the book’s key arguments is that the French Jesuits’ political endeavors outstripped what France itself was willing to commit to North America. Economically, France benefited immensely from the rich sugar plantations of its Caribbean possessions. By contrast, French territories in North America were considered to have strategic value but also a drain on resources.

By the eighteenth century, McShea illustrates, the Jesuits were effectively filling political and economic voids left by the Bourbon state in Nouvelle-France as ongoing war corroded the French monarchy’s ability to project power around the globe. This included Jesuits shaping colonial diplomacy, gathering intelligence, supplying weapons, organizing Indian forces to wage war against France’s enemies, and trying to cultivate Indian leaders as “a pan-tribal aristocratic warrior elite for New France that would prove more loyal to the king of France and the values of civilité . . . than many colonial Frenchmen seemed to be.”

This set precedents for how France would pursue its colonial enterprises in Africa, the Middle East, South East Asia, and the Pacific in the nineteenth and twentieth centuries. It’s no coincidence that the anticlerical Third Republic was quite happy for Catholic religious orders to undertake activities in French colonies which they were restricted from performing in mainland France after 1905. For one thing, the educational and health services built and staffed by missionaries reduced colonialism’s financial demands upon the Republic’s coffers. Intensely patriotic French clergy also turned out to be quite adept at pursuing la mission civilisatrice and cementing loyalty to France among indigenous elites.

The other dimension of the Jesuit mission unveiled by McShea is how much it was a lay enterprise. By digging into the archival sources, McShea shows that “the Jesuits of New France were part of a large, mostly lay network of French elites of a more Gallican and politique than ultramontane bent.” It wasn’t a matter of French Jesuits being unfaithful to the papacy or “motivated by a corporate Jesuit identity that transcended other loyalties.” McShea’s point is that the Jesuits’ on-going work to build “a royalist, Paris-centered, transatlantic French and Indian political community” necessarily meant that the mission took on lay dimensions. For many of these lay Catholics were in the business of building French imperial power, not a Rome-centric supranational project.

A major portion of the lay contribution to the Jesuit mission was, unsurprisingly, financial. Considerable amounts of the correspondence sent by missionary Jesuits to France were concerned with securing economic resources to fund the mission. Much of the initial impetus for France’s colonial efforts came from merchant-adventurers who viewed the pursuit of profit, France’s interests, and the cause of religion as of the same cloth. But McShea observes that while Jesuit missionaries on rare visits home to France spent plenty of time “[hobnobbing] with duchesses and royal bureaucrats” to raise money, they urged the same lay Catholics “to export to America urban French institutions such as charitable hospitals and schools.” Nor did the Jesuits have qualms about lobbying French entrepreneurs to invest in trade, mining, and other economic ventures to enable France to “compete economically with other European powers.” They even employed “proto-liberal and capitalist . . . conceptions of the benefits of Atlantic commerce for both France and the colonized peoples it adopted” to make their case.

All this points to something which McShea insists must be taken more seriously in studying the history of Catholic missionary efforts: the need to assess these activities from a realist standpoint. She notes how no less than John Henry Newman “pleaded for more realism in discussions of Christianity among scholars and preachers of his day.” Newman understood that while Christianity is other-worldly, it is also this-worldly. In Newman’s words, cited by McShea from his Essay on the Development of Christian Doctrine, Christianity’s “home is in the world and to know what it is we must seek it in the world, and hear the world’s witness to it.”

It’s not a question of downplaying the religious motives that led French Jesuits to cross the Atlantic, knowing that they might never see France again. “The men of the mission,” McShea writes, “were profoundly, self-sacrificially, and sometimes militantly motivated by the raison d’être of the Catholic Church: to win souls to God, bring them the means of eternal salvation, and help them glorify God while sojourning on earth.” They were, however, also French and deeply committed to their country. McShea’s insight is that the full meaning of their choices can only be understood if we recognize that they did not regard France, the world’s first self-consciously nation-state, as a mere means through which to evangelize non-Christians. The missionaries, she says, believed

in France’s special calling to expand the Church into America, but also its capacity, as a mature European power that could outdo ancient Rome’s glories, to incorporate diverse populations and expressions of Christianity into a transatlantic community that was still eminently French and Catholic. Such confidence explains the almost shocking consistency we see, over time, among these Jesuits with respect to their willingness to sacrifice North American and French lives, including their own, to New France’s defense and expansion.

In our time of resurgent national feeling throughout the West and much intra-Catholic disagreement about the nation’s place in the world, the type of realism advocated by McShea in trying to understand what Catholics do, and how and why they do it, seems more necessary than ever.

About Dr. Samuel Gregg 39 Articles
Samuel Gregg is Research Director at the Acton Institute. The author of many books—including the prize-winning The Commercial Society (Rowman & Littlefield), Wilhelm Röpke’s Political Economy (Edward Elgar), Becoming Europe (Encounter), the prize-winning Reason, Faith, and the Struggle for Western Civilization (Regnery), and over 400 articles and opinion-pieces—he writes regularly on political economy, finance, American conservatism, Western civilization, and natural law theory. He can be followed on Twitter @drsamuelgregg
Xing