In his new study, titled The Disputed Teachings of Vatican II: Continuity and Reversal in Catholic Doctrine, Msgr. Thomas G. Guarino, who is professor of systematic theology at Seton Hall University, gives an impressive analysis of Vatican II’s teachings to see whether they represent development or change in light of the thought of Vincent of Lérins (AD 434). 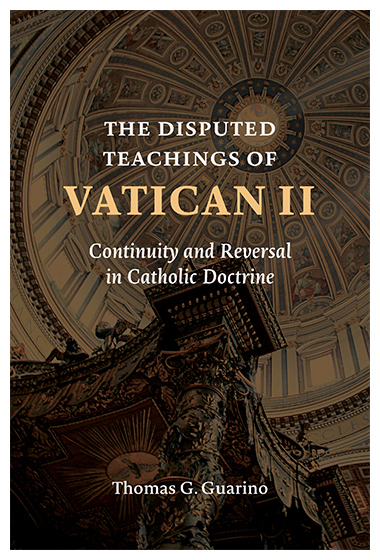 The fifth-century monk’s thought has been utilized by the Catholic Church—down to and including Vatican II—as the only legitimate way to deal with continuity amidst change. Do its teachings, for example, on revelation, particularly scripture and tradition (Dei Verbum), religious freedom (Dignitatis Humanae), on ecumenism (Unitatis Reintegratio), and the corresponding ecclesiology of Lumen Gentium, the theology of religions of Nostra Aetate, represent continuity or rupture with the antecedent Catholic tradition? Is it a matter of profectus or permutatio fidei? This question represents, in nuce, the central problem of Vatican II: “How are tradition and novelty, continuity and discontinuity, theologically reconciled?”

Being of one mind with the Church on this matter, Guarino’s starting point for dealing with the question of doctrinal development is the distinction between truth and its historically conditioned formulations that Pope John XXIII invoked in Gaudet Mater Ecclesia, his opening address at Vatican II. John stated:

What is needed is that this certain and unchangeable doctrine, to which loyal submission is due, be investigated and presented in the way demanded by our times. For the deposit of faith, the truths contained in our sacred teaching, are one thing, while the mode in which they are expressed, but with the same meaning and the same judgment [‘eodem sensu eademque sententia’], is another thing.

The subordinate clause, which I have cited in its Latin original, is part of a larger passage from Vatican I’s Dogmatic Constitution on Faith and Reason, Dei Filius (1869-70), which is earlier invoked by Pius IX in the bull of 1854, Ineffabilis Deus, also cited by Leo XIII in his 1899 Encyclical, Testem benevolentiae Nostrae. And this formula in Dei Filius is itself taken from the Commonitórium primum 23 of Vincent of Lérins:

Therefore, let there be growth and abundant progress in understanding, knowledge, and wisdom, in each and all, in individuals and in the whole Church, at all times and in the progress of ages, but only within the proper limits, i.e., within the same dogma, the same meaning, the same judgment (in eodem scilicet dogmate, eodem sensu eademque sententia).

Furthermore, there is a crucial difference for Vincent between change and development (progress). Development must occur within the “proper limits, i.e., within the same dogma, the same meaning, the same judgment [in eodem scilicet dogmate, eodem sensu eademque sententia].”

Clearly, Guarino is not arguing that a new and different meaning must be given to dogmas in order to make them acceptable to our times. This is evident from his explanation of key concepts like ressourcement and aggiornamento. Vatican II’s project is a form of renewal theology in which the Church returns to authoritative sources of the faith aiming at renewing the present. Although the truths of the faith may be expressed differently, we must always determine whether those re-formulations preserve the same meaning and judgment (eodem sensu eademque sententia), and hence the material continuity, identity, and universality of those truths, even with the reformulations’ correction, modification, and complementation. According to Vincent’s interpretation of dogma, and, Guarino argues, of Vatican II’s teachings, linguistic formulations or expressions of truth can vary in our attempt to deepen our understanding, as long as they maintain the same meaning and mediate the same judgment of truth (eodem sensu eademque sententia).

In fact, this distinction between truth and its formulations has ecumenical significance. Other Christian traditions may have a deeper grasp and hence a more articulate but nevertheless complementary formulation of some aspect of the revealed mystery of revelation shared alike by Catholics and Protestants (Unitatis Redintegratio 17).

Moreover, Guarino argues that there is continuity underneath the surface contradictions of, say, Pius XI’s encyclical Mortalium animos of 1928 and Vatican II’s Unitatis Redintegratio. However, like the Dutch Reformed master of dogmatic and ecumenical theology, G.C. Berkouwer (1903-1996), Guarino is fully conscious that the matter regarding the nature of that continuity must be addressed. Berkouwer explains: “That harmony [in dogmatic development] had always been presumed, virtually self-evidently, to be an implication of the mystery of the truth ‘eodem sensu eademque sententia’.” He adds, “Now, however, attention is captivated primarily by the historical-factual process that does not transcend the times, but is entangled with them in all sorts of ways. It cannot be denied that one encounters the undeniable fact of the situated setting of the various pronouncements made by the Church in any given era.”

How, then, exactly, is a single and unitary revelation homogeneously expressed, according to the same meaning and the same judgment, given the undeniable fact, says Berkouwer, “of time-conditioning, one can even say: of historicity”? Berkouwer insightfully states, and Guarino agrees, “All the problems of more recent interpretation of dogma are connected very closely to this search for continuity.… Thus, the question of the nature of continuity has to be faced.”

Guarino faces this question in Chapters 2, 4-5, by developing a hermeneutical framework accounting for the manner in which new doctrinal formulations mediate the universality and material identity—a dogmatic conceptual hard core—of the permanent meanings and propositional truths of Christian dogmas, such as that of the Trinity, Incarnation, and Atonement, and so forth, according to the same meaning and same judgment (eodem sensu eademque sententia). The meanings of those propositions are true if (and only if) what they assert is in fact the case, being the way things are; otherwise, they are false. In short, regarding the status of meaning, the way things are, objective reality, states of affairs, is what makes “meanings” true or false. Guarino calls this type of legitimate theological pluralism commensurable pluralism, a type that is consistent with the realist underpinning of the hermeneutic of continuity because “any change envisioned by Vatican II raised the question of material identity over time, and this inevitably entails the veracity and reliability of divine revelation itself.”

Moreover, Guarino squarely faces the issue of reversible teaching. These teachings are by their nature reformable and revisable, being non-definitive, such as the Church’s teaching on, for example, church/state relations, ecumenical relations, and religious liberty. These teachings do not possess the doctrinal weight of being infallible and irrevocable in any sense whatsoever. Guarino, for one, argues that Vatican II reversed the Church’s teaching on ecumenism but not the first principle of Catholic ecclesiology that is de fide teaching and hence infallible, namely, the Church of Jesus Christ is realized per se and per essentiam in the Catholic Church. Yes, Vatican II’s Lumen Gentiun did assert that there are elements of truth and sanctification outside the Church’s visible boundaries; also that these elements or vestiges are present with varying degrees in these other churches, and hence the Church of Jesus Christ is efficaciously present in these particular churches, meaning thereby that they participate formaliter et substantialiter in Christ’s Church.

However, Guarino also argue that Unitatis Redintegratio rejected, in unison with Pius XI’s Mortalium Animos, ecclesiological relativism, a false irenicism, and hence an ecclesial indifferentism. Thus, reflecting on the meaning of “subsistit in” (Lumen Gentium 8), he argues that the following dilemma should be avoided.

Guarino assists us in avoiding this dilemma by drawing on the concepts of analogy and participation, of primary and secondary analogates. He argues:

Thus, the Catholic Church is the primary analogate of the church of Christ; the other churches by virtue of their participation in Christ’s church, which is shown in the elements of truth and sanctification realized in them to a greater or lesser extent, are the secondary analogates. Concludes Guarino, “Vatican II’s accent on the analogical similarity of other churches to Catholicism is one of the council’s most significant theological fruits. It has given rise to a vibrant ecumenical spirit within the Catholic Church.”

Analogical and participatory thinking helps us to give an account of unity and diversity within the One Church. Yet, Guarino’s correctly judges that this thinking is open to abuse in developing the theology of religions presupposed by Nostra Aetate because it overlooks the human resistance due to sin, and hence the distortion, misinterpretation, and rejection of God’s general and special revelation.

The documents of Vatican II are, however, interpreted in another way, which I will call Neo-Traditionalism. The Neo-Traditionalists are anti-Modernists to the degree that they do not acknowledge that theological Modernism had actually identified a real problem in upholding the permanence of meaning and truth. Therefore, the Neo-Traditionalists absolutize continuity of dogmatic truth without displaying any appreciation for the historical nature of those truths’ human formulations. As Jaroslav Pelikan describes the position that I am calling Neo-Traditionalism: “Tradition without history has homogenized all the stages of development into one statically defined truth.” Thus, Neo-traditionalism takes, for example, Pius XI’s of 1931 as the normative teaching of the Church on ecumenism, and hence rejects Unitatis Redintergatio.

Finally, a Neo-Modernism has surfaced in the so-called “new paradigm,” or “pastorality of doctrine” approach of, e.g., Richard Gaillardetz and Christoph Theobald, S.J. These approaches (1) fixate on the historical-factual process, (2) the corresponding idea that truth-claims do not transcend the historical process, as well as (3) the rejection of propositional truth and the attendant idea of propositional revelation. Theobald, for one, collapses the distinction between the substance of the deposit of faith and its formulation into a historical context, without attending to the “Lérinian” subordinate clause—eodem sensu eademque sententia—while also dismissing the notion that unchanging truths and their formulations are distinguishable within the deposit of faith. He does not hesitate to draw the conclusion: the substance of the deposit of faith as a whole is “subject to continual reinterpretation [and re-contextualization] according to the situation of those to whom it is transmitted.”

Guarino correctly judges that the Catholic Church has made significant use of Lérinian thought as a crucial hermeneutical key in dealing with the central problem of Vatican II: “How are tradition and novelty, continuity and discontinuity, theologically reconciled?” His work is a landmark study in interpreting Vatican II.