“Not another book on the Second Vatican Council! Just as progressive Catholics are constantly revisiting the Council so as to tell again the story of their liberation from the ancient pharaoh of the older Catholicism, so it is, alas, incumbent on orthodox Catholics to revisit the texts in a better frame of mind than that of their liberal rivals. This is less often done, and it is too important a task to be left to traditionalist Catholics who can find in the Council nothing more than a damnable débâcle.” 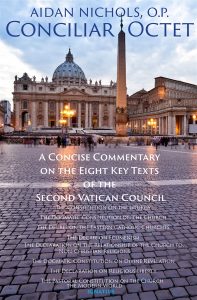 It is with these words that Fr. Aidan Nichols, O.P. opens Conciliar Octet, a new book written in a spirit all too absent from much writing on the latest ecumenical council of the Church and, for that reason, all too needed. But, truth be told, the words of Fr. Nichols which I have just quoted do not do his own book justice. If too much of the extant writing of the Second Vatican Council is the work of those who interpret it according to the hermeneutic of rupture, it is also true that all too often those who embrace the hermeneutic of continuity do little more than insist that conciliar documents are protected by the infallibility and indefectibility of the Church—simplistically and wrongly marrying acceptance of the council with refusal to recognize that the conciliar documents do contain ambiguities which need to be clarified and points that need to be studied more fully.

He grounds his attempt to address such difficulties on the distinction between the conciliar documents as acts of the magisterium and the council as a “historical event”, that is too say between what the conciliar texts actually say and the reasons why some participants in the council supported them. Because the conciliar documents are magisterial acts the fundamental reference point for their interpretation is the established theological tradition of the Catholic Church rather than the personal beliefs of this, that, or the next person who took part in the historical process whereby the wording of those acts was formulated.

This is not to deny the pertinence of the intentions of the authors and creators of the texts, but it is to say that the limits within which such intentions are pertinent must be kept clearly in mind. To look primarily at the intentions of certain of the council’s participants (such as particular theologians or even a simple majority of bishops), rather than at the context of Catholic tradition as a whole or at the intentions of the council fathers as a whole, is to approach the conciliar texts in an all too modern spirit, one which takes history rather than divine assurances of infallibility and indefectibility as its starting point.

This mistake is made not only by modernists but also, ironically enough, by Lefebvrists. It causes grave difficulties because, as Fr. Nichols recognizes, the wording of the conciliar documents did sometimes reflect compromises between orthodox and unorthodox participants in the council. And this fact is used by both modernists and Lefebvrists to argue that unorthodox interpretations of the conciliar documents reflect their true meaning or the true “spirit” of the council, and to argue that the use of wording which allows for orthodox interpretations was merely a tool to placate more faithful bishops.

Fr. Nichols shows why, from a theological perspective, the intentions of unorthodox participants in the council ought to be disregarded in attempts to arrive at the true meaning of the conciliar texts, an interpretative principle which he shows is valid not only because it is necessary if Catholics are to accept the binding nature both of the conciliar documents and of earlier teachings, but also because of a broader truth about all teachings of all ecumenical councils. In any ecumenical council only the official conciliar texts as they are promulgated reflect the consensus of the council as a whole—the consensus sanctioned by papal authority—is binding. This means that even if ninety percent of the council fathers wished for a text to be given one orthodox interpretation and ten percent wished for another orthodox interpretation, there would be no obligation to accept the former. The willingness of the majority to agree to wording that allows for both interpretations proves that there was no intent to promulgate the majority interpretation as binding. If in some cases unorthodox participants in a general council agree to promulgation of texts which allow for both orthodox and unorthodox interpretations this means that there was no consensus to make binding an interpretation which is in fact prohibited by other magisterial acts.

Having established such principles, Fr. Nichols goes on to show that the conciliar texts contained valuable doctrinal developments together with real ambiguities. They were not (as more responsible traditionalists argue) merely ambiguous restatements of earlier teaching which were intended to muddy the waters and which, therefore, ought to simply be ignored. But (the attitudes of some orthodox champions of the council notwithstanding) they did, at times, fail to express legitimate developments in ways which clearly insisted upon an orthodox interpretations and clearly excluded heterodox ones. This failure (resulting from the intentions of unorthodox participants in the council) cannot be used to negate the council’s real accomplishments, but does make it necessary to clarify the council’s authentic meaning.

As a short work containing no more than an overview of possible lines of interpretation Conciliar Octet does not pretend to be anything like the final word, even a final non-magisterial word on the exact form that all such clarifications should take. Much of what the book says is quite tentative or suggests no more than general directions such clarification should take. Its primarily goal is to lay the groundwork and set up the signposts needed by scholars who wish to more fully work out the ways in which conciliar teachings represents legitimate development within a hermeneutic of continuity.

Whatever disagreements any of us may have with particular interpretations which Fr. Nichols gives to particular sections of the conciliar texts, we can be grateful to him for a book which does an admirable job of setting the stage for such reflection and research.