Death generally makes for unsettling reading. Unless, of course, we’re talking about true crime fanatics or mystery lovers. Those people can’t get enough of it. But death, especially our own—The Big One, the thing none of us can escape—well, that is something most of us would rather avoid thinking about. It was none other than La Rochefoucald who said, “Neither the sun nor death can be looked at steadily.” That sounds about right for most folks. 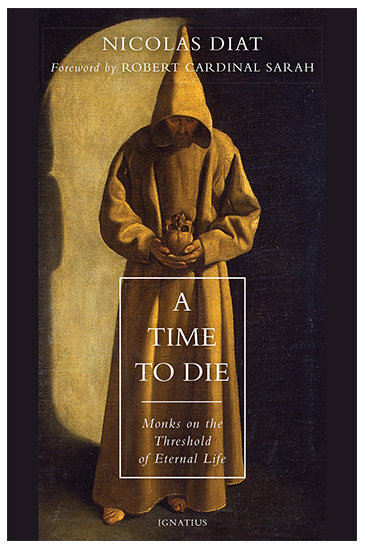 And yet we must square up with The Inevitable, acknowledge its power, and submit to the ultimate failure of the human condition. It calls to mind the iconic scene in Ingmar Bergman’s film, The Seventh Seal. Death (appropriately but creepily dressed in black) appears before a crusader knight on a desolate beach. The knight asks who he is and the black-clad figure responds, “I am Death.” The knight follows with the obvious: “Have you come for me?” Death mechanically replies, “I have long walked by your side.” The knight challenges Death to a game of chess—a game the knight cannot win. And so it is with us. We may buy some time but the game is a loser from the first move.

It isn’t as grim as all that, is it? If we follow Pascal’s metaphor it certainly is. He viewed Man as condemned; given a death sentence we merely wait for our turn on the executioner’s block. Many of us spend our days seeking pleasure and distraction, fueling the illusion that if the axman is busy with others, we will somehow be left alone. Then there are those, like Montaigne (channeling Seneca and the Stoics), who view the inevitability of death as demanding a life of philosophical preparation. “To philosophize,” he wrote, “is to learn to die.” Samuel Johnson—more heroically perhaps—sees death in military terms, writing, “To neglect at any time preparation for death, is to sleep on our post at a siege; but to omit it in old age, is to sleep at an attack.”

Catholics welcome death as the porta caeli, opened for us through the death and resurrection of Jesus Christ. And so it is a particular comfort—and challenge—to read Nicholas Diat’s new book.

Diat, co-author (with Cardinal Robert Sarah) of books on faith, silence, and the collapse of the West, looks steadily at death through the eyes of men who spend their lives in spiritual preparation for it: Augustinians, Benedictines, Cistercians, Trappists, Norbertines, and Carthusians. The monasteries he visits are, rather propitiously, rooted in the spiritually arid soil of modern France. He writes movingly and sympathetically—even poetically—about those hidden in God who walk the most human of paths. It is compelling and transformative. And rare.

Diat could easily have descended into the spectacle of agony, dwelling on the morbid details of monastic deaths both young and old. Or he could have ascended the heights of hagiography and turned brave and simple men into plastic figures of perfection fit for a dashboard. He does neither. His authorial restraint allows the honesty—both brutal and beautiful—of these humble monks to speak to us as “heart speaks unto heart.” A poignant example of this is Diat’s rendering of his time at Lagrasse Abbey.

An old Maurist foundation, the Augustinian Canons had only recently taken possession. The renovation of the monastery was difficult, the life hard. Brother Vincent-Marie, a young electrician from Normandy, threw himself into the building up of the community even as his own body was beginning to crumble. Brother Vincent was diagnosed with multiple sclerosis and with the help of his brothers fought every step of the way. Even for monastics given to meditatio mortis, it can be hard to accept the suffering and death of a brother. Diat writes, “The spiral of the cursed hourglass constantly leaped before their eyes. Each deterioration called for a solution in order to continue to believe.”

As death stalked him, his brothers remained physically close. But, Diat says, “the more he advanced toward God, the less his brothers understood him.” This is an extraordinary observation considering their religious vocations. “Spiritually,” Diat notes, “Brother Vincent moved farther and farther away. No one could join him.”

Brother Vincent died “with great ease.” A face distorted by pain in life was radiant in death. This is what most would expect to read about death in a monastery; that somehow they die easier because they die holy. While this is certainly true in many cases, it isn’t the whole story. At the Benedictine monastery of Solesmes the author learned of a frail brother, mystical and ascetic. “He had a surprising interior strength, but he panicked when he sensed death approaching.” And at En-Calcat, another Benedictine community, a brother infirmarian committed suicide. Like any family who has endured such a loss, the monks at En-Calcat live with a deep wound. It is scarred over now and, though answers elude, prayer abounds.

At the Trappist Abbey of Sept-Fons, Father-Abbot remembers the loss of a young monk some twenty-eight years earlier. Brother Théophane died of a brain tumor and his absence remains a presence to this day. The Abbot is convinced that the death of Brother Théophane “reveals a divine teaching.” “For him [the Abbot], in carrying away a monk in the prime of life,” Diat writes, “God wants to show men that he is the only Lord of Life and that men are not masters of their death. He has his reasons, and it is not given to us to understand them.”

The Benedictines of Fontgombault, amid flowing chant and frigid winters, pray regularly before Our Lady of a Happy Death. Dom Delatte thinks death is largely related to the fear of the unknown. And monks who have perhaps been softened by peaceful routine may be apprehensive to leave. Dom Delatte thinks it rare for one to want to leave the world. It doesn’t mean, of course, that a monk (or any of us for that matter) can’t accept his fate with a certain, shall we say, aplomb. At Mondaye Abbey, Norbertine Canon Fr. Vincent celebrated with his Abbot and a glass of champagne two days before he died. It is not clear whether this was the French in him or the Norbertine.

Some of the most remarkable passages in the book involve Diat’s time at Citeaux, the birthplace of the Cistercian Order. Brother Philippe, long time infirmarian in charge of sick brothers at the monastery, has witnessed many deaths up close. Unlike spiritually sterile hospitals, a monastery’s infirmary serves as a school of charity for the entire community. All are students of the mystery and mercy of God. When Brother Marie-Joseph lay dying, Brother Philippe found him saying his prayers. “His features were twisted by the pain,” he says. “I did not think that at this point a face could be so transformed by convulsions. He was lost in prayer and suffering.”

For his part, Brother Philippe “felt very small” next to his dying brother. As much as pain transformed the living, a holy embrace transfigured the dead. “In a flash,” Brother Philippe observes, “the hardship of pain had given way to the infinity of joy. I can still see the light of their eyes. I will never be able to forget that sublime color which was no longer human.”

The book ends on a bracing note at Grande Chartreuse. The reader realizes by now that La Rouchefoucauld is only half right. The sun indeed cannot be looked at steadily; death, however wretched or peaceful, can. The Carthusians—at risk of imputing to them a pride they do not possess—exhibit a spiritual swagger that is unmistakable. The most austere and eremitical order in the Church, these men live alone in community. Most of their lives are lived in total solitude. Not merely hidden in God, they are lost forever in Him. And to the world: they have no public ministry; their monasteries do not welcome the public; they publish spiritual works anonymously; they are buried in unmarked graves.

These men die as they live. Alone. “Dying alone,” Dom Innocent says, “is part of our charism. This death resembles us.” One Carthusian died returning to his cell after Night Prayer—without a sound. Another was found on his knees in prayer. Dom Jacques announced that he was leaving. “This is it,” he said, “it is time.” He died ten minutes later in a stairwell.

Throughout the book, Diat shows the myriad ways in which monks—flawed like us—face death. They die as we do. But they do so in utter humility and obedience to God, the Master of Life and Death. Their suffering and death—far from being hateful as in the eyes of the world—are the “final exam.” In passing, they produce abundant fruit. Diat’s book is evidence. “Thinking about death is not morbid,” Cistercian Brother Philippe says. “Every day, we must prepare to die.”

A Time to Die: Monks on the Threshold of Eternal Life
By Nicholas Diat
Ignatius Press, 2019
Paperback, 174 pages

Charis in the World of Wonders is the novel of the year—and the odds are that you’ve never heard of it. Or, if you have, you’ve not yet read it. Every year, a hundred thousand […]

Surgeon who operated on Cardinal Sarah: ‘I could feel his holiness’

Rome, Italy, Sep 25, 2021 / 04:00 am (CNA).
The surgeon who performed an operation on Cardinal Robert Sarah in southern Italy in July said that treating the Guinean cardina… […]