Jesus Christ calls all of us to be his disciples. But how are we each called to live out that discipleship? What will discipleship look like for each of us? How can we surrender ourselves to God’s will? A new book aims to answer these important questions.

Father George Elliott is a priest of the Diocese of Tyler, in eastern Texas. He is the co-founder and director of Catholic CAST Media. Father Elliott was a student at the US Air Force Academy when he discerned a call to the priesthood. He entered St. Charles Borromeo Seminary in Pennsylvania, and spent a year speaking about vocations at high schools throughout the Archdiocese of Philadelphia as a “vocations envoy.” He now serves on the diocesan vocations board for the Diocese of Tyler. 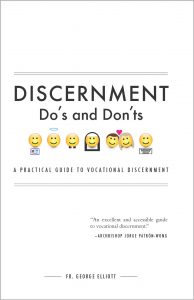 Many years of experience in vocational discernment—both his own discernment process and those of others he has guided—have gone into Father Elliott’s recent book, Discernment Do’s and Don’ts: A Practical Guide to Vocational Discernment (TAN Books 2018). He recently corresponded with Catholic World Report via email about this book and about discernment.

Catholic World Report: Tell us how the book came to be.

Father George Elliott: The idea to write Discernment Do’s and Don’ts began when I was discerning religious life. I had an attraction to religious life. I thought it was a beautiful thing, but I wasn’t sure if God was calling me to it. I started reading a ton and talking to all sorts of different people, and I realized that everyone had an opinion on vocations and how to discern, but very few agreed with each other. I wanted to make sure I was doing this right—choosing a vocation is obviously a major life decision—so I went back and started reading all of the old sources. A lot of the best texts weren’t available in English, and I couldn’t find any books in English that really embraced all of the tradition of the Church on vocations and vocational discernment. When I began to help other people discern their vocation, I realized that my experience was not unique. A lot of young people are in that same state of confusion and don’t know where to turn. That’s when I decided to write Discernment Do’s and Don’ts. I had an author friend of mine, Father Jeff Kirby, introduce me to his publisher. I proposed the book to him, and a few months later the process of writing the book began!

CWR: Why is the topic of discernment one that you are especially passionate about?

Father Elliott: I am passionate about discernment because of two deep convictions that I have: 1) I love my vocation as a priest, and I am convicted that when someone is both doing God’s will and certain that one is doing God’s will, that person is happy in this life and on the path to eternal happiness; 2) every soul was created for heaven, and living the vocation that God has created us for is the easiest and quickest path to Heaven. Therefore, if you truly love someone—you desire for them to be happy in this life and in the next—helping them discern their vocation well should be top priority.

CWR: Can you briefly tell us your own discernment and vocation story?

Father Elliott: I was born into a Catholic family, but was not particularly interested in my faith until I had a conversion in late high school. By that time, I was pretty sure that I was called to the priesthood, but I didn’t want to do God’s will. I had already planned out my life: I was going to go to the Air Force Academy, get a good job, so that I could marry a beautiful wife, and have a big house, and live the “American dream.” I got into the Air Force Academy, and the first summer I was there, during Basic Training, they emphasized the importance of doing one’s duty, service before self, and answering the call. They would often say “serving your country is the highest calling,” and something would catch in the back of my mind telling me that while serving my country is a very high calling, it is not the highest calling—serving God is the highest calling. Slowly, through the influence of the formation I received during that first year at the Air Force Academy, I opened up to where God was in fact calling me, and after the first year, I entered the seminary for the Diocese of Tyler. While I was in the seminary for the Diocese of Tyler, I became exposed for the first time to several great religious priests. I saw how good and beautiful their life was and became very attracted to religious life. I went through the discernment process well, and realized that God was calling me to be a priest in the Diocese of Tyler. I was ordained in 2015, and have been happily serving as a priest of the Diocese of Tyler since.

CWR: The whole concept of vocation is somewhat controversial these days. Society tells us that we should do what we want, what feels good, what “makes us happy” (but the secular concept of happiness differs greatly from an authentic happiness). How are people supposed to sift through that noise and discern God’s call?

Father Elliott: I think the idea of discernment comes from a conviction of three simple facts: 1) God made me, so he knows what will make me authentically happy; 2) God loves me, so he wants me to be authentically happy; 3) therefore, whatever God is asking me to do will make me authentically happy. If we can keep ourselves focused on those three points, we can stay focused on finding God’s will for us in our lives. In regard to discerning our vocation, I am a big proponent of the adage, “Those who are faithful in small things will be faithful in great things.” I cannot count the number of people I have worked with who, after focusing on doing God’s will each moment of each day, simply had their vocations dropped in their laps, so to speak. Discerning and following God’s will in the small details of our lives will lead us to discern and follow easily God’s will in the larger details such as our vocation.

CWR: Is there a difference in the process of vocational discernment for young people, and those who are older?

Father Elliott: Fundamentally, there is no difference in the process of vocational discernment for younger and older people. Focusing on living a life of holiness, understanding the vocations, sharing what God is doing in your soul with a guide or director, and taking concrete steps to test out the vocation are the universal building blocks for discernment (and the Christian life!). The only clear difference would be if a person is not yet in a position in which they can take a concrete step toward a particular vocation (due to required schooling, crippling debt, supporting sick or aged parents, etc.). That person would have a slower process than someone who is free to begin taking concrete steps toward their vocation.

CWR: Did you discover/realize anything over the course of writing this book that you wish you had known during your own discernment?

CWR: Does vocational discernment end when you have begun a given vocation (e.g. been ordained, gotten married), or is there an ongoing process of discerning how to live that vocation? What does this look like?

Father Elliott: Strictly speaking, vocational discernment (discerning which vocation you are called to) ends at ordination, solemn vows, or marriage, but discernment never ends. That discernment changes in two ways. The first way is that it can no longer be a personal discernment. Every vocation is lived “with” some other person – a diocese, a religious order, a spouse, and therefore, discernment within that vocation is one that is very wrapped up with that other entity or person. The second way is that it has a more concrete direction. All discernment is about doing the will of God, but once we are in a particular vocation, God’s will for us is particularized. For example, a Franciscan friar could discern, with his superiors, whether he should beg his way across Europe preaching the Gospel. On the other hand, a married man would not discern whether he should beg his way across Europe preaching the Gospel. He would discern what is the best way to love his wife and children here and now.

CWR: What are you hoping to accomplish with this book? Who are you trying to reach?

Father Elliott: Discernment Do’s and Don’ts was written to be a practical guide on vocational discernment for teens and young adults. While I was discerning religious life, I realized that there was not such a book written in English, and many of the books that were written in English did not embrace all of the Catholic tradition on discernment and vocations. This book reads the tradition of the Church in continuity with itself and communicates the theology in a practical way so as to be accessible to the average reader discerning a vocation.