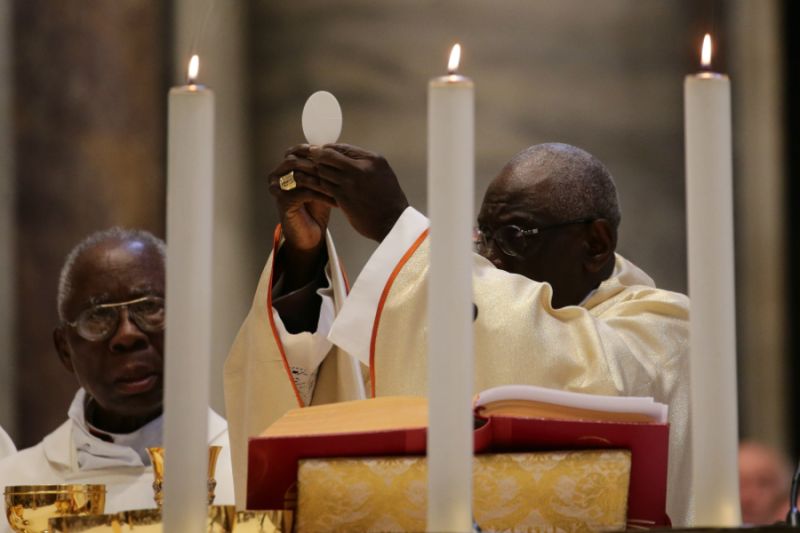 In a new book, Cardinal Robert Sarah calls priests to spiritual renewal, saying that it will not come through structural changes, but through rediscovering the priest’s mission and identity as the presence of Christ in the world.

“Christ never created structures. Of course, I’m not saying they aren’t necessary. Organization is useful in society, but it is not first,” Sarah said in a Nov. 16 interview with the Catholic French weekly Famille Chrétienne.

The book, currently available only in French, includes passages from saints and the Church Fathers to encourage meditation on the renewal of the priesthood, which, according to the cardinal, is a necessary step on the way to resolving the crisis in the Catholic Church.

Structures “are also often a danger, because we take refuge behind them,“ he said. “God will not ask accounts of an episcopal conference, of a synod … It is us, bishops, that he will hold accountable: how did you manage your diocese, how did you love your priests, how did you accompany them spiritually?”

Sarah ended a more than six-year term as prefect of the Congregation for Divine Worship and the Discipline of the Sacraments in February.

The 76-year-old from Guinea wrote a book on the priesthood, celibacy, and the crisis of the Catholic Church, “From the Depths of Our Hearts,” in 2020. The book attracted controversy centered on whether it was co-authored by Pope emeritus Benedict XVI.

Sarah said that in his new book he wanted to express his affection and encouragement both to priests who are struggling and those who feel strong in their vocation.

“It is about encouraging them not to lose God, to have the courage to follow Christ as they accepted from the beginning, on the day of their ordination,”he explained. “Because the crisis that we are going through today in the Church depends essentially on the priestly crisis.”

The cardinal also commented on the scandal of abuse in the priesthood, saying that the Church “must not be afraid of the truth.”

“We must feel deeply hurt, suffer from it as Christ suffered when Judas betrayed him, when Peter denied him,” he said, adding that the Church and her priests are supposed to be models, and even one case of abuse is too many.

“The discovery of so many sins committed gives us a better understanding of the apparent sterility of our local churches. How could we bear fruit when such cancer was gnawing at us from within? We must rediscover the meaning of penance and contrition,” he said, urging adoration of Jesus in the Blessed Sacrament “in reparation for the profanations committed against his image in the souls of children.”

Sarah added that Catholics should not let themselves be overcome by discouragement, however, because the overwhelming majority of priests are faithful, which is a cause for thanksgiving.

“Their daily and hidden fidelity makes no noise, but it silently carries deep seeds of renewal,” he said.

“It is up to us to see how the guilty priests can be punished and, if possible, cared for, healed, accompanied, so that such acts do not happen again,” the cardinal continued. “Above all, it is up to us not to let these horrors turn souls away from Christ and lock up so many innocent victims in suffering.”

Sarah’s book is dedicated to seminarians, and he said he wanted to encourage them too, because they are studying to become priests at a difficult time.

He said that he wanted to tell them that if Christ has called them to the Catholic priesthood, he will also give them the means to really follow him.

“Try to take this call seriously. The Lord who calls you is not going to leave you alone. He will support you with his grace, but you yourself must be a fully realized man, a true, honest, upright man who has all the human qualities,” he said.

Families play an important role in supporting priests, he noted, encouraging people to invite priests into their homes to pray and converse.

A strong prayer life is vital for every priest, he said, citing the example of the saints such as St. John Vianney, the Curé of Ars.

The cardinal also commented on the way that France and other Western countries have closed themselves off to God.

“If France, if the West, thanks to the ministry of priests, rediscover that God has come among us, that he loves us, that he wants our salvation, that he wants us to discover the truth and that this truth will help us will set free, then the mission will be possible,” he said.

The Center for Applied Research in the Apostolate (CARA) recently released their study on the attitudes of priests ordained ten years or less. CARA is arguably the most reliable, professional organization dealing with Catholic concerns […]

A number of years ago, my spiritual director, a priest, went on a leave of absence because of various troubles. He was considering leaving the priesthood. I wrote a heartfelt letter to offer my thoughts […]

All of us old enough have vivid memories of where we were when the news reached us that planes had struck the Twin Towers of the World Trade Center. On the morning of September 11, […]

A secretary interrupts a busy executive’s schedule announcing the visit of a salesman. The executive growls, “Tell him I’m busy!” and he goes back to practicing his putt. The secretary politely tells the salesman that […]