This Sunday, we celebrate Father’s Day in addition to the feast of the Most Holy Trinity. One of the most important things a Father does is to share something of himself with his children. Rod Stewart was correct in his song “Forever Young” that “all the wisdom of a lifetime, no one can ever tell.” Yet fathers give something vitally important to their children when they talk to their kids about themselves, sharing their life’s story, their thoughts, feelings, and especially their faith.

Some fathers have a very hard time opening up about themselves, while others enjoy it so much they can bore their kids to tears with stories about the good old days! But it remains true that sharing the gift of himself with his children is one of the most loving acts a father can perform. It is a real misfortune for a child to know little or nothing about his father.

Tragically, there are far too many children in this world who have never known a loving father, or whose fathers are unable to show their love. But all of us who are baptized have a Father Who loves us more deeply than we can possibly imagine. When we are baptized, we are adopted as God’s children.

And God our Father shows His love in the first place by sharing Himself with us. He does not leave us on our own in this world, to spend our lives on the impossible mission of discovering Him for ourselves. Our human reason can tell us that there is a God, sort of like how we know we have biological fathers and I could even do a DNA test to say this man is my father. But knowing the identity of my biological father does not bring me close to knowing anything about him, who he really is. It’s not the foundation for the kind of loving relationship a father and child ought to have.

Just so, knowing there is a God and knowing Who He is are very different things. To know Who God is, I need God to share Himself with me—to disclose or reveal to me all that I can know about Him.

And so God our Father does reveal Himself to us. The whole of Sacred Scripture unfolds for us the story of God’s identity and His love for us. Perhaps the most succinct expression of this message is found in John 3:16, hoisted on signs at countless sporting events and other public gatherings: “For God so loved the world that he gave his only Son, so that everyone who believes in him might not perish but might have eternal life.”

But John 3:16 is so famous, it is so often placed before the public eye, because it is the heart of the Gospel, which means that it is the heart of all of reality. It is the deepest truth about the life of every person who has ever lived or will ever live. Even our love for God takes a back seat to God’s love for us. St. John writes in his First Letter, “In this is love: not that we have loved God, but that he loved us and sent his Son as expiation for our sins” and also “We love because he first loved us” (4:10; 4:19).

A few years ago, I spent a couple of weeks with a group of seminarians studying Spanish near Mexico City. On Saturdays, the seminarians go on cultural excursions to learn about Mexican history and culture, and also to visit important religious shrines such as the Basilica of Our Lady of Guadalupe. On my second Saturday in Mexico, we visited the ancient city of Teotihuacan, one of the greatest and best preserved cities of ancient Mesoamerica. Teotihuacan is located just to the northeast of Mexico City, and features two massive pyramids called the “Pyramid of the Sun” and the “Pyramid of the Moon.” Considering that this city’s history ran from about 100 B.C.-550 A.D., it is incredibly impressive in its size and its elaborate design. But as with some other ancient pagan religions, there is evidence that this civilization practiced human sacrifice as part of its religion. We probably all know that hundreds of years later the Aztecs would also practice human sacrifice in more or less the same area of Mexico.

My point is not to disparage these civilizations altogether, since they had many good qualities and accomplishments. But it is to say that even the most advanced civilizations, then or now, cannot know the one true God, the God of love—the Father, Son, and Holy Spirit—on their own. True religion is not so much about man’s search for God. It is about God’s search for us. God seeks us out. God reveals Himself to us. God has sent us His only Son to die for us and to save us from death and sin.

No other religion has said this about God. Others have viewed God or the gods as angry, or indifferent to human affairs, or as manipulative of humans. Some regard God as beneficent—meaning God does good things for us. But only Christianity, in fulfillment of what has been revealed by God to the Jewish people, tells us that God is love and that God loves us. That is why it can be maddening to see so many Catholics picking up the vocabulary and practices of other religions, while they seem disinterested in their own faith. Just to take one example, how many Catholics speak regularly about “karma” but never talk about God’s grace? What about God’s blessings? His Providence? His gift of salvation in Jesus Christ?

Perhaps the best way we can celebrate this Trinity Sunday is simply to thank God for revealing Himself to us, to thank Him for the gift of His saving love. We aren’t going to get anywhere in becoming the kind of people God calls us to be if we don’t appreciate Who God is and what He has done for us. If we Catholics don’t treasure our faith, how can we live it, let alone share it with others so that they might also know the one true God? 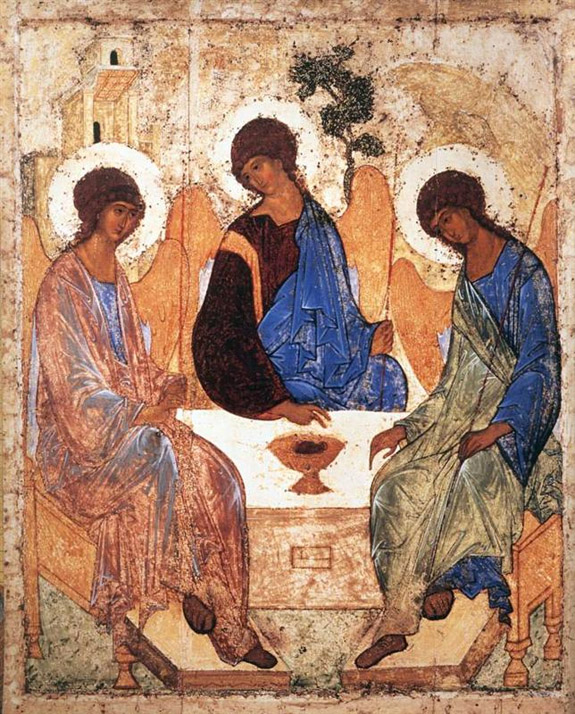 About Fr. Charles Fox 79 Articles
Rev. Charles Fox is an assistant professor of theology at Sacred Heart Major Seminary, Detroit. He holds an S.T.D. in dogmatic theology from the Pontifical University of St. Thomas Aquinas (Angelicum), Rome. He is also chaplain and a board member of Saint Paul Street Evangelization, headquartered in Warren, MI.