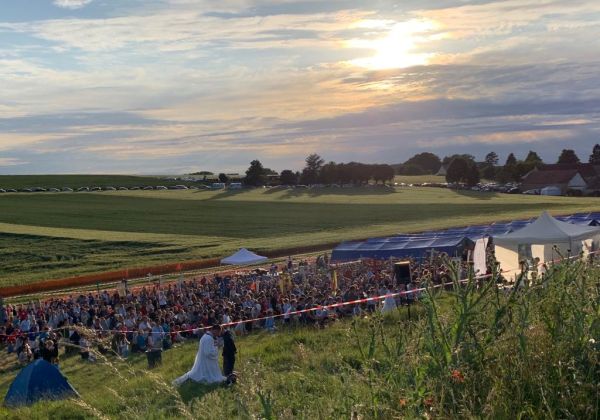 Pilgrims from across the globe trekked through the French countryside June 8-10 praying the rosary, singing, and talking together, stopping only for Mass and to camp for the night.

“Each year it is a great moment because we can leave our work, leave Paris, leave everything to concentrate on our faith and prayer. I think it is the spiritual summit of our year,” 31-year-old Parisian Raphaëlle de Feydeau told CNA.

Feydeau has walked the Chartres pilgrimage together with her family over Pentecost weekend annually for the past thirty years. Her mother carried her along the way when she was an infant.

“When we walk sometimes we are in silence, sometimes we sing, we pray, and we have time to speak to each other,” Raphaelle’s mother, Sybil Feydeau, added. “It is a good place to meet Christ, and to look at one’s life and decide what I could do better … What does God want me to do with my life?”

The tradition of walking from Notre Dame to Chartres Cathedral dates back to the 12th century as a stage in the route of the Camino de Santiago. Chartres Cathedral, built between 1194 and 1220, has been an important pilgrimage destination throughout French history due to its relic of the Virgin Mary’s veil and its blue rose window depicting Mary holding Christ.

Today the Pentecost Chartres pilgrimage is the largest of its kind in Western Europe, in both number of participants and distance covered.

The pilgrimage’s opening Mass, traditionally held in Notre-Dame de Paris, was moved this year to Paris’ second largest church, San Sulpice, due to the damage caused by a fire that destroyed Notre-Dame’s spire and timber roof in April.

The pilgrimage is divided into four age groups with varying difficulty and pace, including a “family group” in which parents with children 6 and under camp and walk a portion of the route together.

Many of the pilgrimage participants were part of youth groups or Catholic scouting troops, who walked together carrying flags representing their country or region, crosses, and banners with the image of their chosen patron saint.

A 16 year-old from Ireland carried the Irish flag with babies’ feet painted on it to represent her prayer intention for the unborn after abortion was legalized in her country. An engaged couple from Portugal walked the pilgrimage together to consecrate their state of life to Mary. A delegation from New Zealand carried the banner of a French saint, Peter Chanel, who was martyred as a missionary in Oceania.

Catholics from Syria, Iraq, Lebanon, and other Middle Eastern countries walked the pilgrimage with a group representing the French organization SOS Chrétiens d’Orient. The humanitarian group also organized two coinciding pilgrimages for Catholics in Iraq and Syria over Pentecost weekend in solidarity with the Chartres walk.

Twenty-six year old Majd Kassouha, a Syrian, said his intention for his pilgrimage was a prayer for peace.

“I have prayed for peace, especially in Syria, and in all the world because I don’t want other people to live what I have lived, my experience,” Kassouha told CNA. He and his family remained in Aleppo throughout the country’s civil war and said he witnessed the death of many of his friends and family.

“We have to pray … we cannot do anything without praying. We are so weak. That is my experience,” Kassouha, a 26 year-old Melkite Catholic, said. “We need this time to think about our lives and make a meditation.”

Priest chaplains could often be seen walking behind the pilgrimage groups hearing confessions of the young participants. Each group had a chaplain who provided meditations on the saints and catechesis on the social doctrine of the Church and this year’s pilgrimage theme, “The Peace of Christ through the Reign of Christ,” as they walked.

Since 1983 the Pentecost pilgrimage has been organized by Notre-Dame de Chrétienté, currently led by layman Jean des Tauriers and chaplain, Father Alexis Garnier of the Priestly Fraternity of St. Peter.

Because so many people come out in the streets to watch the pilgrimage pass by, this year the organizers added an “evangelization team” to engage with curious onlookers, Notre-Dame de Chrétienté Vice President Hervé Rolland explained.

“Each year we have people asking if they can follow us,” Rolland told CNA. “Two years ago there was a lady who was struck by the children walking … she asked, ‘Can I follow you?’ She did, and six months later she asked to be baptized.”

Rolland said that many vocations have also been discovered or confirmed for young people as they prayerfully walk the pilgrimage.

Three Masses took place over the course of the pilgrimage, each in the extraordinary form, though many private Masses were said as well. On Pentecost Mass took place in a field in the countryside midway through the day’s 20 mile walk.

The culminating Mass was celebrated in Chartres Cathedral by Archbishop André-Joseph Léonard, the emeritus Archbishop of Mechelen-Brussel.

“I want to tell the pilgrims something: the Catholic Church, no matter what anyone says, remains the most beautiful multinational of the world, that is the multinational of faith, hope and charity. Even if we are going through difficult times, we must always say the creed with conviction: I believe that the Church is one, holy, Catholic and apostolic. We must remember it is holy,” Archbishop Léonard told EWTN.

“In troubled times like ours, everywhere but especially in countries like France or Belgium, my country, there is a lot of confusion after the series of scandals we’ve faced, people definitely need to hang on to something sound. I think that an initiative like the Chartres Pilgrimage helps people to become stronger in faith and hope.”

Fr Julian Carron resigns as president of Communion and Liberation