In Infiltration: The Plot to Destroy the Church from Within, Dr. Taylor Marshall purports to show that the Catholic Church has been infiltrated by Freemasons and Communists. Already ahead of its release, the hardcover was ranked #1 in several Amazon.com categories. The interest in this book testifies to the hunger for an explanation for the current chaos in the Catholic Church. 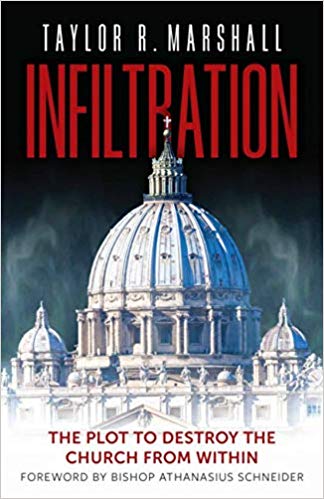 Have Freemasons placed their agents within high positions in the Church? Marshal cites a 19th-century document showing that the Freemasons wanted to subvert the Church. But showing they wanted to infiltrate the Church does not prove that they actually succeeded. He cites a list of purported Freemasons that circulated around the short pontificate of John Paul I in 1978. The fact that someone circulates a list doesn’t prove the list was accurate. These facts are the beginning of a serious investigation, not the conclusion.

He shows that the town of Sankt Galen has a historical connection with Freemason and Satanic groups. He places a young Theodore McCarrick in the town of Sankt Galen in 1949. Unfortunately, simply placing these people and institutions in the same location does not tell us what they did or indeed whether they did anything at all. Indeed, Marshall himself says, “One cannot help but wonder if Sankt Galen served as an infiltration center for recruiting young men to infiltrate the priesthood. Perhaps the arrival of the fatherless Theodore McCarrick to Sankt Gallen…” (emphasis added).

In other words, Marshall is speculating, not proving. Once again, the beginning, not the end, of a serious investigation.

Likewise, to “prove” the claim that the Communists infiltrated the priesthood, Marshall cites Bella Dodd’s testimony to the House Un-American Activities Committee. She claimed that the Communists had placed more than 1,000 agents in the priesthood, including four men who were cardinals. However, she does not name a single name. Rather than seek corroborating evidence, Marshall takes Dodd’s statements at face value. He tries to work out who the four cardinals might have been. Of the cardinals he considers most likely, he presents no evidence that any of them spent a single day in or near Moscow or a Communist training group, or that any had a single encounter with a confirmed Soviet agent.

Even JFK conspiracy theorists (“Lee Harvey Oswald was a Soviet agent”) can point to Oswald’s time in the Soviet Union.

I am not setting an impossibly high standard: serious research into Soviet covert operations can now be done. For instance, Lt. Gen. Ion Mihai Pacepa, formerly of the Romanian Army, and University of Mississippi Law Professor Ronald Rychlak have shown that the Soviets created an elaborate disinformation campaign to smear Pope Pius XII as “Hitler’s Pope,” starting with the play The Deputy. Rychlak wrote an entire book assembling the evidence and documenting his case; Pacepa was the highest-ranking intelligence official ever to defect from the Soviet Bloc. The combination of Rychlak’s research and Pacepa’s testimony leaves no doubt that the Soviets wanted to discredit the Catholic Church. But did the Soviets successfully place agents in the priesthood who are still operating to undermine the Church? Perhaps. Infiltration’s brief chapter adds nothing to the evidence provided by serious scholars such as Rychlak and Paul Kengor, author of numerous books on the Soviet era.

The most startling instance of under-researched but over-stated conclusion occurs in the chapter entitled, “Infiltration in John Paul II’s Pontificate.” Marshall says: “Fr. Marcial Maciel was also able to walk between the raindrops through bribes given to Monsignor Stanislaw Dziwisz, beloved friend and counselor or John Paul II.” The context of this remarkable statement is that Marshall is describing the changes to canon law during John Paul’s reign. Marshall asks rhetorically, “Why did the Code of Canon Law under John Paul II remove the language of ‘adultery,’ ‘bestiality,’ and ‘sodomy’ from clerical punishment?” He provides no research to answer this question.

Instead, Marshall’s statement leaves us to draw conclusions from a chain of inferences. 1) John Paul II personally revised the Code of Canon Law to reduce the penalties for clerical sexual misconduct; 2) he did this for no good reason whatsoever; 3) he did it because Marcial Maciel, who was guilty of sexual misconduct, bribed Dziwisz.

Surely this is a serious charge. It deserves more substantiation than Marshall’s drive-by character assassination. In my opinion, this is an appalling lapse of scholarship and judgement, not to mention charity.

We humans crave certainty. We are comforted by being sure that we are correct. Critics of religion sometimes claim that this desire is the sign of an immature, gullible mind. I do not agree. The desire for knowledge is part of the longing for truth. I believe God placed these desires in every human heart, so we will seek him.

The current crisis of clergy sexual abuse and cover-up creates a cloud of suspicion over just about everyone. We do not know if a beloved priest accused of sexual abuse is the innocent victim of a frame-up or the guilty perpetrator of fraud, along with his other crimes. We do not know if a person making an accusation is telling the truth, exaggerating, or inventing out of whole cloth. Under these circumstances, the impulse to latch on to a global explanation for all our problems is completely understandable. The urge to blame Those Bad Guys Over There is almost irresistible.

But however understandable, we should resist the urge to embrace more assurance than the facts allow. I issue this challenge to anyone who has Infiltration in their possession. Read Chapter 9, “Communist Infiltration of the Priesthood,” with this question in mind. “If someone I care about were being investigated for a serious crime, would I be satisfied by the amount and type of evidence presented in this chapter?” If the answer is “no,” set this book aside and give serious thought to whether you want to commit to its thesis.

Even if the Freemasons and Communists did infiltrate the Church (which is by no means certain), that does not change our basic responsibility. What the Church needs now is saints, lots and lots of saints, saints who are teachers and priests and doctors and nurses and attorneys and mothers and fathers and yes, book authors and editors.

All of us must do our part to be as truthful and loving as we can be. Reach out to victims. Inform ourselves to the best of our ability. And resist the urge to run after superficial explanations and artificial certainty.

Infiltration: The Plot to Destroy the Church from Within
by Dr. Taylor Reed Marshall
Sophia Institute Press, 2019
Hardcover, 224 pages.