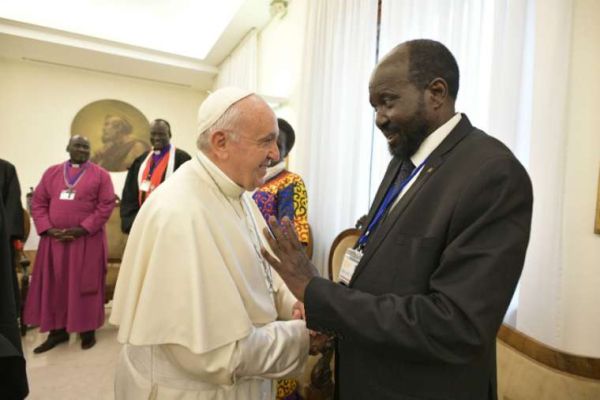 Juba, South Sudan, May 20, 2019 / 04:32 pm (CNA).- In an unprecedented gesture last month, Pope Francis kissed the feet of several South Sudanese leaders, who were visiting the Vatican for a retreat, in a plea for peace in the country.

“I felt humbled at the humility of the Holy Father, to bend down on the ground and kiss my feet,” Kiir told EWTN News in an interview May 7.

Kiir and former vice-president Riek Machar met with the pope April 10-11 during a retreat at the Vatican.  The pope hosted the retreat specifically for the leaders, who have been at war with each other for years.

Pope Francis encouraged the South Sudanese leaders to “seek what unites you, beginning with the fact that you belong to one and the same people, and to overcome all that divides you,” and told them he was praying for them to become peacemakers, who “build peace through dialogue, negotiation and forgiveness.”

“We have clearly heard the cry of the poor and the needy; it rises up to heaven, to the very heart of God our Father, who desires to grant them justice and peace,” he said.

In 2011, the predominantly Christian South Sudan gained independence from Sudan, which has a Muslim majority and been governed mostly by Islamic law since the 1980s.

A five-year civil war began shortly after the country gained its independence. The war has killed hundreds of thousands of people and displaced millions more.

The fighting has primarily taken place between those forces loyal to Kiir and rebel groups led by Machar. The war has left 2.1 million people internally displaced, with another 2.5 million refugees, according to the United Nations.

“The purpose of this retreat is for us to stand together before God and to discern his will…It is to reflect on our own lives and the common mission the Lord has entrusted to us, to recognize our enormous shared responsibility for the present and future of the people of South Sudan, and to commit ourselves, reinvigorated and reconciled, to the building up of your nation,” the pope told Kiir and Machar.

Kiir and Machar signed a tenuous peace agreement in September 2018, which the country’s Catholic bishops have called “fatally flawed” because it does not address the complex root causes of the conflict.

“Taking the decades and years of mistrust that had existed between these different forces, it’s not an easy thing” to have peace established overnight, Bishop Eduardo Kussala of Tombura-Yambio in South Sudan told EWTN News.

Still, Kussala said the bishops’ conference is grateful for and encouraged by the pope’s meeting with the leaders of opposing groups in South Sudan.

“We have tried to keep the momentum, to continue to work harder and make sure peace is actually in this country….It has again energized us” to serve the leaders and the people, he said.

Kiir said his meeting with Pope Francis was especially meaningful for him, as he grew up in an area of South Sudan that was evangelized primarily by Catholic missionaries, from whom he has learned much.

“Jesus came to the world to teach people to forgive and to live in peace with whoever is near you. And we as Catholics, especially in South Sudan, we have learned a lot from God’s teaching,” he reflected.

“This is why [although] we have been under oppression all this time…we’re able to reconcile with those oppressors and then we see them as brothers and sisters.”

Kiir said the moment when the Pope displayed such humility was inspiring to him as the leader of the country.

Bishop Kussala said his diocese has been working on peacebuilding and reconciliation efforts.

“We feel that finding local answers, local solutions to the problems emerging among us is the way forward,” he said.

The diocese recently united with other church groups to bring 10,000 young men back from the bush, where they had been fighters, and to prepare the community for reconciliation and forgiveness.

“Many of them are being integrated into the government and are already working in the different organized forces. Others are also being engaged in social and economic activities,” he said.

Kussala emphasized the spiritual aspect of the peace process. He said it is important to see one another with the eyes of faith.

“[We must] believe that we are all equal, we are children of God. We have to forgive each other, that is our strong weapon,” he said. In recent months, violent clashes have escalated, creating a massive refugee crisis that has gone largely unnoticed in much of the Western world.

“Political and ethnic tensions have forced millions of Congolese to leave their homes in the past year alone. The vast majority of these people are internally displaced within the country, while a minority have become refugees upon fleeing to neighboring countries,” said Amakala Constantin Sodio, the Kinshasa-based Catholic Relief Services country representative in the Democratic Republic of the Congo and Congo-Brazzaville.

Sodio told CNA Dec. 8 there has been a “rapid escalation” of conflicts in the regions of Kasaï, Tanganyika and South Kivu in 2016 and 2017. This has put 4.3 million people into a crisis situation, facing emergency levels of food insecurity.

More than 1.7 million people have fled their homes this year alone. The U.N. has classed the country refugee situation as Level 3, equal to Syria, Iraq and Yemen in its humanitarian need.

The situation is far from stabilizing. At least 14 U.N. peacekeepers and five Congolese soldiers were killed in an attack in North Kivu province Thursday night, believed to have been carried out by a rebel group.

“It’s a mega-crisis. The scale of people fleeing violence is off the charts, outpacing Syria, Yemen and Iraq,” said Ulrika Blom, the country director for the Norwegian Refugee Council, according to the BBC.

“If we fail to step up now, mass hunger will spread and people will die. We are in a race against time,” Blom added.

New armed conflicts, an intensification of current conflicts, and the delay in elections has helped drive the crisis, according to a report from the Internal Displacement Monitoring Centre.

Lambert Mende, the country’s minister of information, disputed the report and said that displaced people number less than 1 million. He said displaced people were in fact returning from nearby countries, the BBC reports.

About 5,500 Congolese people flee their homes each day, the report said. There are 4 million displaced people in the country and over 7 million who lack adequate food.

The average life expectancy in the country is under 60 years old, and more than 75 percent of the population lives on less than $2 per day.

“With an initial focus on emergency response, CRS also carries out development programs focused on health, hygiene, nutrition, and agricultural interventions,” Sodio said. “CRS’ local partnerships and staff presence across the country ensures our ability to rapidly start up projects and reach people in remote areas.”

The Catholic relief agency has 182 staffers in the country and aided 1.3 million people with $27 million in resources programming in 2017, in collaboration with its partners.

The humanitarian emergency is complex and there are no simple solutions, Sodio said.

“Improvements to the quality of life of people displaced will happen slowly as countrywide efforts are made to strengthen local systems, so they may safely return home to rebuild dignified lives,” he said.

CRS has been in the country since 1961 and has maintained a continuous presence since 1993.

Sodio cited the words of Barbara Forbes, a DRC-based International Development Fellow at Catholic Relief Services, who noted that many Congolese refugees are expected to be among the 45,000 people resettled in the U.S. in 2018.

“Personally meeting refugees in the community is a great way for Americans to maintain perspective on this issue,” Forbes said.

“Americans can help these refugees thrive by offering them jobs and volunteering to drive them to medical appointments or explain their household bills,” she added. One refugee in the U.S. had told her of her dreams to go to college on a basketball scholarship and study law.

Such personal connections with refugees make clear the importance of advocacy for increased acceptance of refugee resettlement in the U.S., according to Forbes.