On November 24, 2013, the world was treated to a remarkable sight. Pope Francis, the 265th successor of Saint Peter, held an ossuary containing the bones of the first pope. The current occupant of a seat, which is the longest-running unbroken line of succession in the history of the world, held the mortal remains of the apostle who was the rock upon which Jesus built his Church. 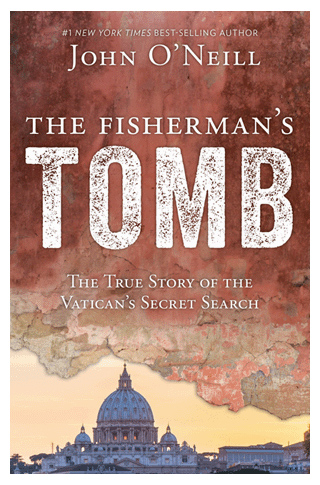 The bones of Saint Peter would seem be important enough to not have been lost or misplaced. But they went missing. For years. For centuries. No one knew where they were, or if they had ever actually been where they were purported to be.

The Basilica of Saint Peter in Vatican City is a Renaissance-era church, built to replace an aging structure originally built in the fourth century. The site was chosen because it was the burial place of Saint Peter, and the altar was constructed directly over the bones of the saint. However, after centuries and centuries, as well as the demolition and building of basilicas, the location of the bones was no longer certain. Did they make it through all of that turmoil? Were they still somewhere beneath?

Then in the past century, during the papacy of Pius XII (1939–58), the decision was made to try to find them again, once and for all. A fascinating book tells the story of how this decision was made, how the search was funded, the strange role of an American businessman, and how the bones of Saint Peter were ultimately recovered.

John O’Neill is the author of The Fisherman’s Tomb: The True Story of the Vatican’s Secret Search (Our Sunday Visitor, 2018). O’Neill brings a unique and eclectic background to this story: a graduate of the United States Naval Academy, former law clerk to Supreme Court Chief Justice William Rehnquist, and senior partner at a large international law firm, he has spent much of his life visiting and researching early Christian sites. He is also the author of Unfit for Command: Swift Boat Veterans Speak Out Against John Kerry (Regnery, 2004), after which he swore off writing. But a trip to Rome planted a seed that ultimately led to the writing of this book.

O’Neill recently corresponded with Catholic World Report via email about his book and the fascinating search for the bones of Saint Peter.

CWR: What inspired the book? Is this something you’ve been interested in a long time?

John O’Neill: The Fisherman’s Tomb was inspired by the tour that I took of the necropolis with Michael Novak in 2007. It is also something that I’ve been interested in for a long time.

CWR: How did you first hear about the search for the bones of St. Peter and, in particular, the excavations under Pius XII?

O’Neill: I learned of the search and excavations on the 2007 tour of the necropolis.

CWR: Why is this so important? One of the “strangest” things about Catholics to outsiders is our veneration of relics. Why are the relics of St. Peter important?

O’Neill: The words of Matthew 16:18 — [“And I tell you, you are Peter, and on this rock I will build my church, and the gates of hell will not overpower it.”] — are not only symbolic, but literal. The inscriptions beneath the Vatican are the oldest, fully authenticated relics in the world. The inscriptions show at the very earliest times that Christians believed exactly the same thing we do today and carved them in stone under threat of death.

CWR: Why is it important that these are the bones of Peter? If they had not been able to satisfactorily shown to be Peter’s bones, then what?

O’Neill: Twice before in the 16th century, the Vatican had tried to find Peter and been unsuccessful. These prior failed attempts seem to validate Luther’s claim that Peter never went to Rome. Had that claim been true and St. Peter’s Basilica been built only on a pagan foundation, it could have been very damaging to the apostolic succession and authority of the pope. The fact that the Church could find a needle in an archaeological haystack is itself amazing and miraculous. Finding Peter’s bones tends to strongly validate the authority of the pope from earliest times.

CWR: Why is the American businessman George Strake such an important player in this tale?

O’Neill: Without George Strake’s financing, none of the story could have happened. Unlimited financing under terms of complete secrecy led to the successful dig. The fact that Strake wanted to remain anonymous made it possible to keep, as the popes desired, the entire excavation a secret for many years. There is no George Strake archeological excavation plaque and never was one.

CWR: And how about Margherita Guarducci?

O’Neill: Margarita Guarducci was a genius and the greatest epigrapher in archeological history. Without her deciphering of the inscriptions on the graffiti wall, it is unlikely that Peter ever would have been found. I doubt there is anyone else who could have deciphered the inscriptions with such tenacity and genius.

CWR: When bishops from around the world make their regular ad limina visits to Rome, they pray (and usually say Mass) at the tombs of Paul and Peter. Is it important for the bishops of the world to feel this connection to the apostles, and to Saint Peter in particular?

O’Neill: It is very possible for the Church to leave its roots, and, indeed, the Bible repeatedly warned Christians to be on guard against the possibility of this happening. An actual visit to the site where Paul was beheaded or Peter’s body was thrown gives them a first-hand connection with the very earliest days of the Church. It provides evidence of the great sacrifices of the Apostle Paul and Apostle Peter to bring the faith forward.

CWR: Would such a connection be more difficult to make if there was not a specifically known burial place?

O’Neill: While desirable, many people do not operate specifically on faith and solely on a spiritual plane. Having actual material evidence of the death of Peter in the way in which tradition told us is extremely important. Likewise, the inscriptions boldly codify in stone the very same beliefs that we have today. They stand as a rebuttal for those who claim that Christianity was an evolving cult or seek to introduce false doctrines.

About Paul Senz 58 Articles
Paul Senz recently graduated from the University of Portland with his Master of Arts in Pastoral Ministry. He lives in Oregon with his family.

Editorial: Benedict XVI’s essay is both insightful and incomplete

Reaction to the unexpected release of a lengthy text—almost exactly 6,000 words in all—by Pope Emeritus Benedict XVI, titled “The Church and the scandal of sexual abuse”, has been both swift and polarized. Some have […]

Major Archbishop Sviatoslav Shevchuk says that a free Ukraine is strengthened by solidarity and patriotism, while noting that “patriotic feelings are neutral” and “they must be evangelized.” His Beatitude recalls the so-called revolution of dignity […]