Last January, the Vatican issued a “Bolletino” titled Oeconomicae et pecuniariae quaestiones, subtitled “Considerations for an ethical discernment regarding some aspects of the present economic-financial system.” Like many such Vatican documents on complicated social questions, the Bolletino is a mixed bag. There are clear statements of longstanding Catholic principles, such as that “markets do not regulate themselves,” and a recognition that despite gains in wealth, inequality and poverty still remain, and in some places remain extreme. Further, the document notes that economics relies on a vision of the human person at odds with modern tendencies to define people as consumers or customers. So far so good. But the Bolletino also contains too-brief analyses of very abstruse financial instruments and a capsule summary of the “financial crisis” of a decade ago; it is likely that this is the first time the phrase “credit default swaps” has appeared in a Vatican document.

The Bolletino comes at an important time. Catholics, especially in America but throughout the West and the world, are rethinking once again the relationship between economics—particularly in its “global capital” or “neoliberal” varieties—and Catholic social thought. Until very recently, in the American or more generally Western context that debate was thought to have been settled. Communism was the enemy of the Church; it was also the enemy of capitalism. Some Catholic thinkers then thought that because communism opposed both, capitalism and Catholicism must be compatible with one another. Further, this “capitalism” was one of worldwide free markets with an emphasis on financial instruments and abstract forms of wealth, rather than industry or farming. The 1991 papal encyclical Centesimus Annus can be thought of as the high-water mark by proponents of this line of thought, since that document praised private property and seemed to condemn centralized planning and what it called “real socialism.”

But more recently a generation of Catholic critics has emphasized other parts of Catholic teaching, also evident in Centesimus and other papal writings. This teaching promotes ideas like the just wage, rights of workers against oppression, and a suspicion generally that economics is a standalone “science” separate form ethical concerns. More generally, this school of thought suggests that “capitalism” may itself inscribe patterns of behavior and injustice hostile to Catholicism. 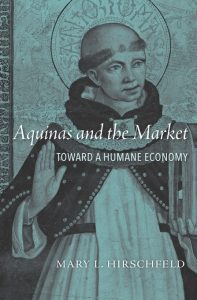 Unfortunately, this important debate has been hindered by the fact that so few of the participants have the facility with both economics and theology to make sense of their commonalities and differences, or to think of the former in light of the latter. Theologians too often condemned the mere notion of business or profit-seeking as immoral; economists thought theology irrelevant to the hard facts of buying and selling. Now comes Mary Hirschfeld, who received her economics doctorate before her conversion, and her theology one afterwards. She knows economics as a discipline, and more importantly she knows how and where it diverted from Catholic thought and where it is the same. Her new book from Harvard University Press, Aquinas and the Market: Toward a Humane Economy, is a welcome contribution to returning to a distinctive, Catholic way of looking at economics, but one that does not rest on unrealistic abstractions or misunderstandings.

Hirschfeld identifies one critical commonality between Catholic teaching on economics, seen through the lens of St. Thomas Aquinas, and that of academic economists: both seek to explain human choices. For the economist, the dominant model is what is called “rational” choice theory. Now—and this is the first of Hirschfeld’s helpful correctives—rational choice theory is not the same as the concept of homo economicus, a being with no end other than the material. The rational choice model “simply says that people efficiently calculate how best to achieve their desired ends but is silent about the nature of those ends. Rational agents can pursue a range of ends, ruthlessly furthering their narrow self-interest in making as much money as possible, say, even if they were running a slave market, but the rational choice model can also account for a Mother Teresa, so long as she efficiently deploys her resources to succor the poor as well as possible.” That model is often reduced to complicated mathematical formulas that tend to marginalize the most important question: does it matter what those ends are, which people are so efficiently pursuing? Without them, those models tend to treat all ends as equal, and material ends as the only ones that count. Enter Aquinas.

Aquinas, too, knows that people make choices, but for Aquinas people are oriented toward happiness, not maximizing utility. That is, Aquinas sees a substantive good against which people’s choice can be measured. This difference in what Hirschfeld calls “metaphysical assumptions” about human wants “has important ramifications for how we understand human rationality, the role of economic activity, and the relationships between ethics and economic issues.” Moving from this basic commonality of human choice and core disagreement about the ends of our choices, Hirschfeld draws out the implications of a Thomist economics. In the traditional Thomist view “the good of economic efficiency carries no weight in its own right.” Rather, “neither markets nor natural wealth have value independent of their role in servicing the higher goods they support,” such as happiness. And as Hirschfeld shows, the abstractions of rational choice are fading before new kinds of thinking about economics that share the empirical and non-material interests of Catholic economics. Indeed, contemporary economics has even begun to recognize the role of happiness in economic decision-making, and that efficiency tells only part of the story.

Because modern economic theory places such emphasis on efficiency, the use of money as a means of exchange can threaten to replace the substantive goods represented by that exchange. That was one problem with the financial crisis: the complexity of the instruments being used was one thing, but the greater problem was that the market for these instruments had lost connection to reality and the goods those instruments were intended to serve. For Hirschfeld, as for Aquinas, economics is a matter of justice as well as exchange: for persons to demand the “lowest” price as determined by a formula can deny the fact that those in the other side of the exchange have their just needs as well. The emphasis is wrongly placed on squeezing out the greatest advantage against another, rather than seeking out the most just arrangement. Hirschfeld skips the vexed question of usury, but notes that Thomas’ focus on justice and substantial goods could support certain interest-bearing transactions.

It is when she considers the consumer economy that Hirschfeld’s analysis becomes even more radical. An economy is not only efficient to the extent possible, but well-ordered; “rational choice, in contrast, invites us to make our choices in a piecemeal fashion without thinking carefully about how various goods and services fit into the overall pattern of our lives.” If we believe that some goods are not served by efficiency, then an economy which stresses them (through the price mechanism) may themselves be harmful for human flourishing. Hirschfeld takes the example of household chores such as dishwashing. Modern appliances make work easier and quicker; but because our demand for convenience can be boundless, we make repeated choices for more and more such devices, which may lead us to remodel our homes, which then may cause a family to have to work harder to afford such and to spend less time together. A series of choices seen only from the vantage point of efficient time-usage, without being ordered to the substantive good (here, of family life), may very well result in less well being, not more.

A Thomistic economics teaches us that economic goods are, and are always, simply instrumental goods to assist us in human flourishing and ultimately in getting to Heaven. His teaching on private property, charity, and economic justice can help erode the emphases modern economic life places on measuring income as happiness and efficiency as an end goal, even if that goal crushes workers and results in less happiness. Hirschfeld has provided a new starting point for a discussion of what economics should be for.

Lessons from St. Mary Magdalene, the Prophetess of Eucharistic Love

St. Mary Magdalene has long been a figure surrounded by controversy, curiosity, and a bit of confusion. In recent years, Dan Brown’s bestselling The Da Vinci Code, portrayed her—against all evidence and logic—as the goddess-like […]

Aquinas on humor and social life

In Summa Theologiae (II-II.168.2-4), Aquinas discusses the essential role that play and humor have in human life.  They are necessary for the health of the individual, insofar as in their absence the mind becomes weary […]