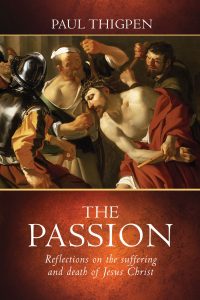 Catholics are sometimes criticized for our emphasis on the Passion and death of Jesus Christ—crucifixes, Stations of the Cross, the Sorrowful Mysteries of the Rosary, and so on.

This is not merely some sort of masochistic fascination with a particularly brutal form of torture. As Christians, we know that our salvation was accomplished through the death and resurrection of Jesus Christ—and there would be no resurrection without first a passion and death. Knowing what horrible ignominies and pains Jesus suffered on our behalf allows us to reflect on the profound and boundless love of God for his people.

Dr. Paul Thigpen has written more than 35 books and some 500 articles in more than 40 religious and secular periodicals. He recently wrote a prayerful examination of the Crucifixion titled, The Passion: Reflections on the Suffering and Death of Jesus Christ (TAN Books). The book contains 40 daily reflections on the Passion, making it particularly suitable for Lent; however, the book can serve as a wonderful guide to meditation at any time in the year.

CWR: Tell me how the book came about.

Paul Thigpen: Back in 2004, just before the movie The Passion of the Christ was released, I was approached by a publisher to write a book that would have a connection to the film. My concern was to deepen readers’ understanding of the movie’s spiritual depth and draw them closer to Our Lord. I was particularly interested to discover the extra-biblical traditions drawn upon by director Mel Gibson in producing this cinematic masterpiece.

As it turned out, Gibson had included scenes based on the visions of two Catholic mystics, the Spanish Franciscan abbess Maria de Agreda (1602–1665) and the German Augustinian Anne Catherine Emmerich (1774–1824). As I delved into the accounts of their visions, I found many powerful insights into the suffering and death of Our Lord.

After praying about the project, I decided to create a series of 40 brief Lenten meditations. Each one would be focused on a Gospel passage presenting a scene from Christ’s Passion, along with a corresponding excerpt from one of the mystics’ accounts alongside my own reflection.

The book first appeared in Lent of 2004, coinciding with the film’s release. This new edition offers revised and updated versions of some of my reflections in a beautiful new layout and binding.

CWR: Why reflections on the Passion? Hasn’t this been done by so many great and holy men and women over the centuries?

Thigpen: St. Bonaventure insisted: “He who desires to go on advancing from virtue to virtue, from grace to grace, should meditate continually on the Passion of Jesus. … There is no practice more profitable for the entire sanctification of the soul than the frequent meditations on the sufferings of Jesus Christ.”

If this is true—and I agree wholeheartedly with St. Bonaventure here—then Catholic writers and scholars should be making available every possible resource for readers to ponder the depths of Our Lord’s Passion and death. Along with the relevant scriptural passages, we should offer both the insights of the great spiritual writers and whatever reflections of our own that might be of help specifically to our contemporaries.

The book’s introduction notes that our culture often attempts to whitewash over the bloody part of the Gospel. All the more reason for us to focus on it in this generation! As I remarked there: “The Passion is an immense thing, a supernatural and divine thing, and thus a dangerous thing. Understood, appreciated, and embraced for its own sake—genuinely, if never fully—it has the power to overthrow us, and overthrowing us, to save us.”

Thigpen: No doubt the Gospel accounts of the Passion have often been manipulated for a diabolical agenda by those who hate the Jewish people. The history of the Church provides ample illustrations of such abuse. Does that mean that the Gospels are themselves anti-Semitic? By no means.

Rather, they recount the events that were prophesied long before by the Jewish prophet Isaiah, who said of the Suffering Servant to come: “All we like sheep have gone astray; we have turned everyone to his own way; and the Lord has laid on Him the iniquity of us all” (Is 53:6, emphasis added). The Gospels report that both Jews and Gentiles (non-Jews) were involved in the torture and execution of Christ. And in each generation, each one of us, Jew and Gentile alike, has driven the nails into Jesus’ hands through our sinfulness.

CWR: I imagine in preparation for this book you reflected on the Passion in perhaps a more focused way than you ever had. Would this be a fair statement?

Thigpen: Yes. I was immersed in the Gospel accounts and mystics’ visions of the Passion for several months. My mind during that time was never very far from Our Lord’s suffering and death. It was as if I were living an extended Good Friday that lasted many weeks.

CWR: In praying and reflecting on Our Lord’s Passion for this book, were there any new insights you had that surprised you?

Thigpen: More than I can count! I think, for example, of Maria de Agreda’s insight that in his Passion, Jesus modeled perfectly the virtues extolled in the Beatitudes. I found a whole new meaning in the moment when Jesus was stripped naked. And in pondering the various figures who surrounded Christ in his Passion and death, I came to realize in new ways that “gathered at the Cross, we each must choose: Will we take our stand with the mother [Mary] or the mob?”

CWR: Is there a certain aspect of the Passion that you particularly connect with, or are particularly moved by?

Thigpen: As a convert to the Catholic faith, I still discover, even after 25 years in the Church, new depths in my relationship to Our Lord’s Blessed Mother. Standing with her at the foot of the Cross, I continue to learn so much from her about faith, hope, and love.

In writing a commentary on the Gospel of Luke last year, I gained a new insight into Jesus’ last words on the Cross that gave me a whole new perspective on this terrible scene of the mother standing close beside her dying son. I knew that his words “Father, into Your hands I commit my spirit” were a quote from Psalm 31:5. But I then discovered that in Jesus’ time, this psalm was memorized by Jewish children and recited each evening as a bedtime prayer.

Now I could see it: Jesus was reciting this bedtime prayer one last time, as he fell asleep in the arms of his Father, and his mother kept her loving vigil close beside.

It moves me to tears every time I think about it.

CWR: Jesus Christ was brutally tortured 2,000 years ago; the Body of Christ—his Church—continues to be beaten and bloodied and tortured, sometimes by her own members. How can reflecting on the Passion of Our Lord help Catholics weather turbulent times in the Church?

Thigpen: We could say so much in this regard, but one thought takes priority for me right now. My book’s first reflection focuses on Christ’s Agony in the Garden, where his “soul is very sorrowful, even to death” (Mt 26:38), so that he sweats blood (Lk 22:45).

Anne Catherine Emmerich portrays Our Lord having a vision there of “all the sins that had been or were to be from the fall of Adam to the end of the world, and of the punishment they deserved. Jesus fell on His face, overwhelmed with unspeakable sorrow, and all the sins of the world displayed themselves before Him, under countless forms and in all their real deformity. He took them all upon Himself, and in His prayer offered His own Person, worthy of adoration, to the justice of His heavenly Father, in payment for so awful a debt.”

Then piling on, Satan points out a particularly heinous crime and taunts him, saying, “You take even this sin upon Yourself?”

These days we may often feel close to despair over the condition of the Church, with so many horrific, obscene, and blasphemous acts by clergy and others being exposed—and with the prospect of many more being laid bare in the days to come. We may be tempted to ask, “Did Jesus take even this sin upon himself?”

When that happens, our only hope is to kneel alongside Our Lord in Gethsemane. We must weep with him for the victims, grieve with him for the sinners, share his righteous anger at the crimes, intercede with him for his people. We must commit ourselves to seeking justice and purification at every level of the Church—from the hidden chambers in Rome to the secret chambers of our own hearts.

In these dark days, we must make our home in Gethsemane, joining our pain to his agony and consoling his Sacred Heart with our presence, prayers, and penances. Ultimately, the empty Tomb lies ahead. But only by way of the bloody Cross that is still to come.

The Blessed Sacrament: It’s either All or nothing

On relics and the “lost” feast of St. Stephen, Proto-martyr

We lost the feast of St. Stephen this year because it coincided with a Sunday within the Octave of Christmas, the feast of the Holy Family, December 26. As the Christmas carol informs us: “Good […]