Dr. Scott Hahn has one of the most well-known conversion stories in recent memory, having made his way, over the course of years, from Presbyterianism and virulent anti-Catholicism to the Catholic Church. (The conversion story of Scott and his wife Kimberly, titled Rome Sweet Home: Our Journey to Catholicism, is available from Ignatius Press.) An well-known speaker, author, and scholar, Hahn teaches theology and Scripture at the Franciscan University of Steubenville and has written several best-selling books, including Rome Sweet Home, The Lamb’s Supper, and the Catholic Bible Dictionary. He is the General Editor of the Ignatius Study Bible series, and is also the founder and president of the St. Paul Center for Biblical Theology. 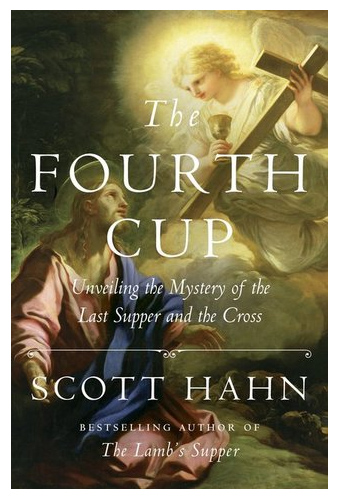 A recent book details another facet of Hahn’s conversion and journey into the Catholic Church. The Fourth Cup: Unveiling the Mystery of the Last Supper and the Cross (Image, 2018) focuses on a facet of the Last Supper and the Passion of Our Lord that has been little noticed, or even ignored, over the centuries. The book recounts Jesus’ Passover meal with his apostles immediately preceding his betrayal by Judas, crucifixion, and death, and then explains the mystery of the “fourth cup” and how understanding this aspect of Jewish tradition can lead to a deeper understanding of the profound connection between the Last Supper, the Eucharist, and the Cross of Christ.

Hahn brings his notable biblical expertise to bear on this topic, weaving the explanation of the “fourth cup” with the personal story of how it affected his journey of conversion. He recently corresponded with Catholic World Report about his new book.

CWR: In The Fourth Cup, you recount the development of your understanding of the “Fourth Cup,” which turned into a talk that you’ve given many times over the years. Can you summarize that story? What prompted you to put this all down in a book after all these years?

Scott Hahn: I was in my last year of seminary, preparing to serve as a Presbyterian pastor. My Christianity was evangelical in style, Calvinist in substance. I was attending the church of my choice, which was pastored by a man who was one of my intellectual heroes. One day he was preaching on Our Lord’s words from the cross, “It is finished” (John 19:30), and he asked the question: What is finished? He admitted that he didn’t know the answer.

I was determined to find the answer. As I searched I discovered the importance of the Passover as the context of Jesus’ Passion. Then I discovered some strange details in his celebration of the Passover. I noticed that Jesus apparently skipped the final cup in the ceremony, and he drew attention to the fact that he was doing so. His Passover was unfinished until a particular moment in his suffering.

The more I researched these matters, the more “sacramental” the moment seemed to me — and the less I was able to relate it to the doctrine I had learned in seminary. It was not long before I found myself inexorably drawn to the Catholic faith.

CWR: That story helps illustrate the real importance of theology and of understanding Scripture; it’s not just an intellectual pursuit, but a vitally important aspect of our daily lives. Why did it bother you so much that you did not know the answer to the question: “What was finished?”

Hahn: Well, the Scripture preserved a definitive statement — literally definitive — delivered by God incarnate. Words don’t get more important than that. From the moment my pastor raised the question, I knew I had to find the answer. But, as you point out, the ability to raise the question and the desire to answer it both presume a love for Jesus Christ. It’s not just a crossword or sudoku puzzle. It’s a matter of life and death. My pastor and I shared that strong devotion to Jesus.

CWR: Once you came to your conclusion about “the fourth cup,” how did this change how you viewed the Catholic faith in the Eucharist? What effect did it have on your journey to the Church?

Hahn: It was an accelerant. Every time I found an answer, the answer raised more questions — and everything seemed to point to the divine origin and abiding authority of the Catholic Church. I stood to lose a lot. As a Catholic I could not pursue the ministry or academic careers that had been my dream. My wife, Kimberly, was not yet on the same page, and I worried that our marriage might be in danger. Everything I loved I seemed to be in danger of losing. But the evidence I found — and kept finding — convicted me and gave me no options.

CWR: The Fourth Cup is a great companion to books such as your book The Lamb’s Supper, or Dr. Brant Pitre’s Jesus and the Jewish Roots of the Eucharist. Why is it important to understand the deeper context and meaning behind what we read in Scripture, and what we do at Mass?

Hahn: Because this is the story of our lives — my life and your life. We cannot understand ourselves until we understand what God has done for us. In the pages of the Bible, the Old Testament and the New, we see how he has planned our salvation from the foundation of the world. He didn’t become acquainted with me at my birth, or even at my conception. God created the world for your delight. He guided the history of Israel so that you could be saved.

CWR: In writing the book, did you gain any new insights into the topic? Having given the talk so many times over all these years, is there anything left to learn?

Hahn: Not only in writing the book did I gain new insights, but in rewriting it, and proofreading it, and then again in rereading it for the TV series based on its story. God’s revelation is inexhaustible.

CWR: The book is very readable and exceptionally approachable for readers who don’t have a background in theology. Do you think it is important for the average Catholic to be able to understand the deeper context of Scripture in general, and the Last Supper in particular?

Hahn: Absolutely. God doesn’t call us all to be theologians, but we should all burn with the desire to know more about the Word of God. And if we’re not feeling the fire, we have an even greater need to study. The more we learn about Jesus, the more we’ll want to know about it. Our study of the Scriptures shouldn’t be over till we too can say, “It is finished.”

CWR: Can this book be helpful to a Protestant who questions the Catholic teaching on the Eucharist? How so?

Hahn: I think so. The theme has been around as a talk and in articles I’ve written, and many people cite the presentation as a milestone along the way to conversion, including my good friend, Marcus Grodi, host of the EWTN program, The Journey Home. The book will make the case in a stronger way, with greater evidence.

How to receive the Eucharist worthily

In the Eucharist, we possess the greatest gift. Within it, Jesus gives us his entire self — body, blood, soul, and divinity — to be consumed under the appearance of bread and wine. But, as […]

A Light in the Darkness: Benedict XVI’s view of the Church in the midst of the crisis of the abuse of minors

Editor’s note: The following address was given by H.E. Robert Cardinal Sarah, Prefect of the Congregation for Divine Worship and the Discipline of the Sacraments, in Rome at the Centre Saint-Louis (Institut Français), May 14, 2019, on the […]

Pope Francis: Jesus’ Bread of Life discourse renews ‘our amazement for the gift of the Eucharist’