August 9th marks the Feast of Saint Teresa Benedicta of the Cross—known also by her civilian name, Edith Stein (1891-1942)—the brilliant Carmelite nun and philosopher tragically killed by the Nazis at Auschwitz during the Second World War.

Proving that her tremendous Christian witness and legacy lives on, however, her feast also coincided with the recent publication of Listening to Edith Stein: Wisdom for a New Century, an anthology devoted to Stein’s contributions to philosophy and theology. 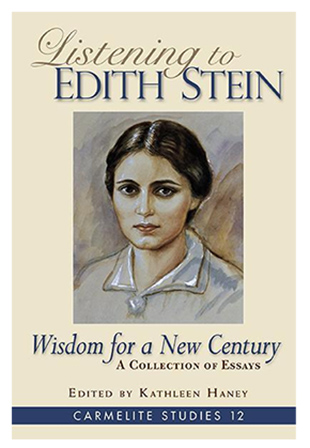 The book, published by ICS Publications (the official translator and publisher of Stein’s works in English), is the latest in a series of major works on Stein, bringing together a dozen of the finest Stein scholars in the world—including Carmelite Father John Sullivan, Sr. Prudence Allen, Sarah Borden Sharkey, Mette Lebech, Antonio Calcagno and Angela Ales Bello—who explore different aspects of Stein’s intellectual and spiritual legacy.

Edited by Dr. Kathleen Haney, of the University of St. Thomas in Houston, it exceeds 400 pages, and signals Stein’s rising stature in both the secular and religious world.

One reason Stein continues to attract so many followers is because she addressed issues of timeless importance—often in a fearless and prophetic way.

Both before and after her conversion, in 1922, and her decision to become a Carmelite nun, in 1933, Stein wrote, lectured and taught about faith and mysticism, Church-state controversies, the role of women, relations between the sexes, racism, discrimination, suffering, death and dying, morality, holiness, the liturgy and renewal in the Church.

The fifteen essays in Listening to Edith Stein reflect upon Stein’s views on these vital topics, and their meaning for our lives today. They powerfully convey what the subtitle of the book calls Stein’s “wisdom for a new century.”

According to Dr. Haney, there are three over-arching themes in Stein’s life which lie at the heart of her enduring appeal.

The first is Stein’s absolute authenticity. As Stein recounts in her autobiography, Life in a Jewish Family, and elaborates on in her many letters, growing up as an inquisitive Jewish child in Breslau, Germany (now Wroclaw, Poland) she went through various stages of belief and unbelief, and yearned for the truth about human existence, but found it elusive—so much so that she often anguished about it, and even contemplated suicide several times. Stein’s struggles and longing for truth were always treated by her “with honesty, passion and great originality,” said Dr. Haney, in an interview. “When people read Edith, they hear that authentic search for truth in her voice.”

After Stein finally discovered truth in the Catholic Church, she embraced it in full, and never looked back. She expressed her new beliefs movingly, said Haney, and admirers continue to “hear her ardent desire to speak that truth in love.”

The second reason is Edith’s compassion for “the Other”—those individuals who have been marginalized and treated as outcasts. “As a woman, a Jewish scholar, a feminist, and a saint, Edith Stein was the quintessential ‘Other,’” said Haney. A target of prejudice and hostility herself, Stein sought to forge bonds with those in similar situations.

Much like Pope Francis, who has exhorted Catholics to protect people on the peripheries—prisoners and migrants, the disabled, poor and lonely—Stein always reached out to people who were isolated and suffering. Her doctoral dissertation On the Problem of Empathy involved that very concern, and was written after she spent time as a Red Cross volunteer, nursing those who had been maimed or stricken with contagious diseases during World War I. Later, during the rise of Hitler and Nazism, she strongly defended the Jewish community, whom she always identified with, even after converting to Catholicism, and continued to do so after becoming a cloistered nun—at one point, even writing an impassioned letter to Pope Pius XI on their behalf.

Had Edith Stein survived the Holocaust, she would have been the first to focus her attention on the six million Jews who had not, and to ask how humanity could have ever allowed such a catastrophe to happen.

One point made abundantly clear in this anthology is that, had the Powers that Be in the 1930s and ’40s been listening to Stein’s courageous messages about empathy, inclusion, love and grace, there would have been no Holocaust, not to mention subsequent genocides and persecutions, and we would now be living in a much more humane and caring world.

To illustrate the point, several contributors draw a sharp contrast between Stein and her contemporary philosopher Martin Heidegger, who moved in a radically different direction than she and actually became a member of the Nazi Party. Professor Haney commented:

Stein, the mother of personalism, believed that each human being was unique, divinely given—as St. John Paul II said, ‘unrepeatable.’ Heidegger, in contrast, misses the value of the person, of knowing the person, of loving the person. Stein’s thinking aims at the Kingdom of God, wherein all persons thrive.

A further divide is that “Heidegger placed anxiety at the center of human experience, and believed it was the pathway to authenticity and existential value, whereas Stein held that the natural attunement to the world was trust, the feeling of being held in a parent’s strong arms.”

Edith Stein “believed in the grandest of Christian narratives,” continued Haney, “whereas Heidegger became enveloped in an evil ideology” which deeply affected his personal life. As proof, Haney noted that when Heidegger became the rector of Freiburg University, “he dismissed faculty who were not sufficiently Nazi… For Heidegger, authentic being is being towards death, for Stein authentic being is redeemed being towards eternal life. Heidegger was a Nazi; Stein was exterminated by the Nazis.” The moral and philosophical gulf between the two could not have been more profound.

The third reason for the growing interest in Edith Stein’s vision was her commitment to intellectual dialogue, especially with those outside the Catholic tradition. Professor Haney believes Stein was a forerunner of ecumenism, interfaith relations, and “the culture of encounter” actively promoted by the Church since Vatican II. But the future saint did not believe in dialogue for dialogue’s sake; she was clear in seeing it as an opportunity with people of differing views to sincerely seek truth—much in the manner of Joseph Ratzinger—in hopes of finding common ground, even if they could not reach total agreement.

Stein’s confidence in this approach was not only inspired by her conversion but her life-long interest in phenomenology, a school of thought founded by Edmund Husserl (Stein’s academic director, and later, his first assistant) which employs a method that analyzes structures of consciousness and the objects of experience. Phenomenology sought to affirm objective truth and the existence of a knowable world in which we live, starting from the point of view of subjects who experience it.

Stein believed the best elements of phenomenology were compatible with Christianity, and in harmony with the thought of Augustine, Aquinas and John Henry Newman, among other Catholic luminaries.

It is no surprise, then, that Stein, as St. Teresa Benedicta of the Cross, has been held in high esteem by St. John Paul II–himself a student of phenomenology, and pupil of Roman Ingarden, one of Stein’s best friends—as well as Pope Benedict and Pope Francis.

Indeed, in his recent Apostolic Exhortation, Gaudete et Exsultate, on the call to holiness, Francis singles Stein out for special praise. Encouraging us to be “spurred on by the signs of holiness” in the “humblest members” of the Church, Francis commented:

We should consider the fact that, as Saint Teresa Benedicta of the Cross suggests, real history is made by so many of them. As she writes: ‘The greatest figures of prophecy and sanctity step forth out of the darkest night. But for the most part, the formative stream of the mystical life remains invisible. Certainly, the most decisive turning points in world history are substantially co-determined by souls whom no history book ever mentions. And we will only find out about those souls to whom we owe the decisive turning points in our personal lives on the day when all that is hidden is revealed.

For her part, Professor Haney, who contributed two essays to the anthology, highlighted another of Stein’s greatest insights: the redemptive value of human suffering.

In The Science of the Cross, Stein’s powerful study of St. John of the Cross, “Stein teaches us that suffering need not be wasted,” said Haney. “Although our culture discounts and disdains suffering, Stein provides a meaning for it on a supernatural level. Suffering is not to be salvaged by distraction or denial. Through suffering, we can share in Christ’s own life by imitating his magnanimity and trust. We can baptize the inevitable pains of human life as gifts from Our loving Father who wants us to grow into ipse Christus [Christ himself].”

Although Stein’s legacy is growing among philosophers and people of faith, it is not quite as well-known as it should be. Dr. Haney hopes Listening to Edith Stein will help change that: “I hope this book welcomes Husserl’s ‘best pupil,’ as he called her, into contemporary phenomenology. I hope my colleagues listen to her. My friends on both sides of the current theological divide can learn from her, too….and I hope that both religious and lay people hear Edith Stein’s passionate voice and share her insights into the value of the human person. It’s past time for her unique voice to be widely heard.”

About William Doino, Jr. 4 Articles
William Doino, Jr. has written about religion, history, and culture for many publications, including First Things, the Times of London, The Catholic Herald, National Review, Inside the Vatican, and America.

Why do people kiss the pope’s ring?

Loreto, Italy, Mar 27, 2019 / 02:23 pm (CNA).- The Vatican press office declined to comment after a video went viral this week showing the pope refusing to allow pilgrims to kiss his ring as […]