Loome Theological Booksellers, formally established in the early 1980s, was the passion project of Dr. Thomas M. Loome, one of the first Catholic laymen to be awarded a doctorate of theology after Vatican II.  Back in the 1970s, after apprenticing in the book trade with Richard Booth, “King” of the first international Booktown, Hay-on-wye in Wales, Dr. Loome began rescuing books from dying Catholic libraries, monasteries, and seminaries which were undergoing an inappropriate purging of their pre-Vatican II material in the midst of their own crisis in vocations and enrollments.  He gathered them from locations all over North America and England into the Old Swedish Covenant Church in Stillwater, where he was also living and raising his young family.

Initially only open by appointment (because of his family), he grew his inventory, year after year, filling up the cavernous former church with the intellectual tradition of the Church. As word spread locally and through his mailed catalogs, the bookstore eventually attracted bookish seekers from around the world.  The habits of nuns, the collars of priests and Protestant clergy, the spectacles of professors, and the thick coats of wintertime browsing patrons were often seen in the bookstore. The click of flashlights turned on to shine into dim stacks of bookshelves, the delight of accents other than Minnesotan, and exclamations like “Look, what I found!” sounded out as pilgrims explored the teetering stacks of bookshelves and books. This was a bookstore worth traveling to visit.

This was Dr. Loome’s mission: giving books new lives by getting them into the hands, hearts and minds of the thousands of visitors to his bookstore.

During the 1990s and 2000s, the vast inventory of the bookstore gave it the position to be able to create libraries and collections of books for new and resurgent orthodox Catholic institutions.  Ave Maria University’s library was almost entirely shelved with books that had passed through the hands of Dr. Loome and his bookstore employees. Cardinals and bishops worked with Dr. Loome and his bookstore to furnish their own offices with good books, but also to get good books into their own diocesan institutions.  Much of the intellectual patrimony of the church was saved and relaunched by Loome Theological Booksellers.

Dr. Loome retired in 2008 and sold his bookstore to a couple of his employees.  Now there is one proprietor of the bookstore, Christopher Hagen, who began working for Dr. Loome in 2001.  In 2012, Hagen moved the bookstore and his growing family to a local farm to cut costs, expand the available space to warehouse collections of books, and have room for new libraries and collections to process. He intended to grow the bookstore and his family there permanently and signed a five-year lease with the intention of purchasing the property after the lease ended.  However, in the last year of the lease, the landlord decided to repurpose the farm for his personal use which, effectively, ended the possibility of buying the farm and/or renewing the lease.

This put the bookstore and Hagen’s family into crisis.  Within months the bookstore needed to find a new home, restructure its business model to fit the new home, and then move and/or sell its warehoused inventory from the farm, all while keeping the bookstore producing income to stay open.  At the same time, the Hagen family had to refurbish a former rental property in town and move their family of nine off the farm. At this time, the bookstore was mostly a family business and so many gracious friends, family, and volunteers helped with all the work.

However, another crisis hit.  Five months before the bookstore and the family had to move off the farm, the Hagen’s seventh child was born months premature.  After a birth which left both Mom and baby bedridden, the baby girl needed three months recovery in the NICU at Children’s Hospital in St. Paul.  This meant that the family business was managing three very difficult challenges at once: moving the bookstore, moving the family, and keeping baby alive at the hospital.

Hagen doesn’t know how his family and the bookstore are still standing in 2018.  However, by the end of 2017, both family and bookstore had moved off the farm, the former to a good house in town which was within walking and biking distance of the new bookstore storefront in historic downtown Stillwater.  Also, baby girl is now a tiny—but very healthy—15 month old.

Yet, the financial repercussions of weathering the crises of 2017 are now pretty close to shutting down the new (and only) storefront for Loome Theological Booksellers.  Although the new bookstore location now sees hundreds of monthly visitors (versus tens of visitors to the farm location), the increased sales have not been enough to pay for the new debt payments from the crises of 2017.

Hagen reports that the increased debt load from the move, is now too heavy to pay and he doesn’t see how he can continue to pay the expenses of an open shop without getting a significant amount of that debt load removed.

The bookstore has launched a GoFundMe Campaign to raise money to pay down enough debt so that the bookstore can continue to have a brick and mortar open shop.

All monies raised will only go towards paying down debt for the bookstore.

Sean Fitzpatrick recently wrote a rallying cry “In Defense of the Book” for the Cardinal Newman Society.  He writes “Books are good. They become like old friends. Books have a life of their own, and reading becomes a true joy when readers find their way into that life. Books interact, inspire, and intrigue—and are free of the frenzy of technology.”.  Fitzpatrick and Dr. Loome would have been comrades in arms in the battle that Dr. Loome’s bumper sticker warned of: “Fight Prime Time, Read a Book”. Loome Theological Booksellers carries on that battle in its own corner of the world, but that battle might be lost without the success of the GoFundMeCampaign.  Keep good books, and their bookstores, alive. It’s no cliche to say that the souls of many depend on it. 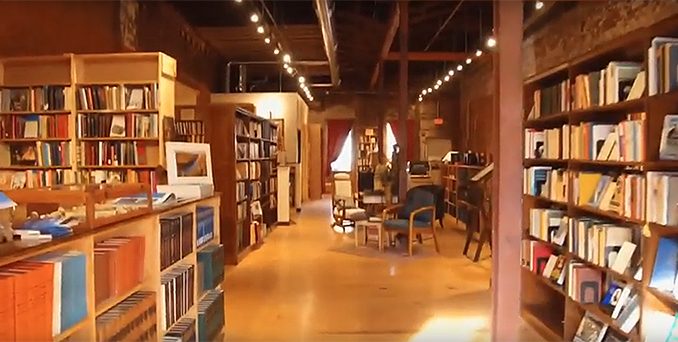