Innumerable young people, especially boys, spend untold hours immersing themselves in fantasies created by DC Comics, Marvel, Lucasfilm, and the like. For this reason, in his book From Star Wars To Superman: Christ Figures in Science Fiction and Superhero Films, James Papandrea is quite right in giving pop science fiction closer attention than others might think it warrants, for there are deeper ideas at stake than the flashy costumes and outlandish scenarios would indicate.

Papandrea explains that Superman and similar “cosmic” superheroes are positioned at one end of a hypothetical spectrum, while Batman, Green Arrow, the Punisher, and other characters bereft of super-powers stand at the other. The latter set calls to mind what can be accomplished with discipline, intelligence, and a sense of mission; yet whether by coincidence or some inner logic, the dark side is often very noticeable in such “merely human” superheroes. Superman, on the other hand, is conceived of as a benevolent, otherworldly power who visits mankind gratuitously, through no merits or agency of man’s own. Superman is a pop culture Christ-figure, Papandrea concludes, a savior sent by his father Jor-El so that he may use his unearthly power on behalf of humanity. 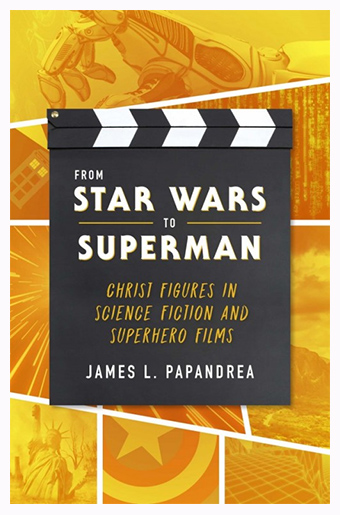 At the same time, the superpowered heroes of movies and comic books inevitably imply troubling questions that go all the way back to the ring of Gyges featured in The Republic. Were a man endowed with godlike powers, how likely is it that he could resist the temptation to abuse them? Are the limitations imposed upon us by the human form necessarily bad things which must be overcome? Given the increasing facility with which the human genome may be modified and with the ever-growing prevalence of digital technology, the uncritical attraction these stories about super-powers have for many boys should give us pause. At its most extreme, the Western inclination to push boundaries has manifested itself in radical ingratitude.

Many now speak openly of man’s body as if it were a prison, one from which we might hope to be liberated via the scientific miracles so often featured in comic books. As Papandrea warns,

if being truly human requires interacting with other humans, we cannot be truly human without our bodies. In other words, being human is not being a soul only, or worse, being a soul trapped in a body. Being human means being embodied – a soul/mind/spirit with a body – all of this together is the substance, or the essence, of humanity.

Here we might ask ourselves whether it is plausible that someone who could see through walls and move faster than a bullet would really behave like that affable, Midwestern Boy Scout, Clark Kent. At least as plausible is The Watchmen‘s “Doctor Manhattan,” a character effectively autistic thanks to the powers which have alienated him from the human race.

If optimistic assumptions about super-powers are questionable, “scapegoating the idea of empire” is even more dubious. By this expression Papandrea refers to the tendency of films such as Star Wars to identify evil with an oppressive sociopolitical order rather than as a flaw within the fallen human soul. Theories of revolution, adds Papandrea,

imply that religion is also a form of fascism because it restricts freedom. Sometimes the implication is that God (through the Church) is restrictive and suppresses freedom. Of course, this is the freedom to do whatever one wants, so it’s a selfish freedom. In that sense, it’s true that the Church imposes boundaries on behavior. But the point of those boundaries is to keep my freedom from harming you and taking away your true freedoms, not to mention keeping us from sin, which separates us from our Creator. But notice again that what is portrayed as truly evil here is the loss of personal freedom: the freedom to be one’s own higher power. It’s the separation of a person from his desires, not the separation of a person from his Creator.

It must be said that in some passages of From Star Wars To Superman Papandrea gets carried away, attributing deep meaning to dialogue and plot points best explained not by theology or Jungian archetypes but by the fact that market-motivated scriptwriters are wont to make things up as they go along. Nor do I see the value in assigning each of the characters addressed in the book points toward an “orthodoxy score” (points are given for such qualities as “voluntary sacrifical death,” “humanity,” and “resurrection”). To get in the habit of putting numerical scores onto characters as we read stories or watch movies does not seem entirely healthy or helpful.

Still, Papandrea’s thesis – that science fiction is not just about science, but is necessarily entwined with philosophy, metaphysics, and divinity – is indisputable. And he adeptly supports this thesis with evidence drawn from his knowledge of both science fiction and the Catechism. Inchoate though it may be, a religious vision really does underlie the Star Wars franchise, or at least the original 1977-1984 run, and Papandrea is wholly persuasive when he argues that that vision recalls the dualism of Zoroastrianism and other eastern cults. The introduction of the guru Yoda in The Empire Strikes Back marked a decisive shift toward the Orient, and a watered-down, commercialized Zen-Taoist hybrid gestalt has today displaced whatever Christian sensibility might once have been found in the series.

Then again, the Eastern mysticism of Star Wars looks almost pro-Christian when contrasted with attitudes found among other science fiction figures. Although I had never exactly mistaken Gene Roddenberry for a card-carrying Evangelical, it was nonetheless a bit of a shock to learn in Papandrea’s interview with Ronald Moore just how closed-minded Roddenberry was toward religion. A genial and inquisitive ex-Catholic agnostic, Moore was part of the creative team involved with Star Trek: The Next Generation, and the far-ranging conversation between him and Papandrea is by far the most compelling part of Papandrea’s book.

During the interview Moore notes how Roddenberry’s attitude toward religion shifted over the years. Where the original 1960s series frequently exhibited vague Deistic nods toward the transcendent, the 1990s reboot was more openly dismissive, thanks to Roddenberry’s instructions to his staff:

[Roddenberry] flat-out said, “In the twenty-first century, there is no religion on earth. All the major religions are gone. It was all mythology, and it’s all done.” It was very much an edict from on high that that was how he saw the future. So, he had kind of changed as a person over those decades and become much more of a humanist, and he was celebrated in certain circles as a great humanist and futurist. He then wanted Star Trek, at that point, to sort of reflect that idea of humanity going forward.

The simplest explanation for Roddenberry’s supposed change of heart may actually stem from the fact that TV producers felt at liberty to be more forthright about expressing themselves during the Clinton Era than they did during the 1960s, when someone who endorsed “gay marriage” would have had trouble getting a job as a county dog-catcher. As the old American identity grows weaker with each passing generation, cultural revolutionaries feel free to remove yet another mask.

In any case, the response of the shows’ writers to Roddenberry’s secular humanist dogmatism is, to borrow a term, fascinating:

Those of us internal to the show kind of bridled against that because we just didn’t believe that five thousand years, or however you care to count it, of human history with a belief system in place was just going to get wiped out in a couple of centuries because of technological progress […] However, that was kind of the edict, so we just kind of played it and as a result, any stories that had to do with sort of a questioning for knowledge of a greater existence or a belief in something bigger than the material world all had to kind of get pushed aside and assigned to alien cultures.

So, in the Star Trek universe the spiritual traditions of Klingons and Vulcans are taken seriously, even as those of Earth have been forgotten. This suggests an astonishing parallel between fiction and reality, because the phenomenon described by Moore is precisely mirrored in secularized Western life today. In the American and European mainstream, “questioning for knowledge of a greater existence” is only treated as respectable when those yearning for “something bigger than the material world” look away from their own Christian roots and seek fulfillment instead through an engagement with “exotic” religious cultures like Islam, Native American animism, or the various tribal cults of Africa and South America.

Rousseau’s noble savage mythos is just that, however, as is the legend of Atlantis, and the image of the samurai, and the Old-West cowboy symbolism which inspired George Lucas. Nor could anyone with eyes in his head fail to see how Roddenberry’s invocation of the final frontier came to resemble a cult; Trekkie fanaticism has long been something of a byword. So,

in spite of protestations to the contrary, sci-fi does trade in mythology, and it does capitalize on the mystery inherent in ancient and esoteric religious symbols […]whether science fiction is written by believers or unbelievers, from a sympathetic or critical perspective, it does try to appropriate the symbols of religion as talismans to add an air of mysticism (or mystery) to the stories.

As opposed to the Christian tradition as Roddenberry may have been personally, many fans would agree that the most powerful scene of his entire series calls to mind the Christian faith just as much as it does science and progress.  I refer to the climax of The Wrath of Khan, wherein Spock lays down his life to save his friends, and in the film’s epilogue he receives a burial in space. This is a clear nod toward the ancient nautical custom of burial at sea, but even more striking than the thought of an old custom being revived in a dramatic new form are the bagpipes which wail in the background, offering “Amazing Grace” as a requiem. Even when consciously motivated by anti-Christian sentiments, science fiction inescapably contains within it a germ of Christian sensibility, however obscured.

The Rise of Skywalker: Reduced expectations and damage control

Star Wars: The Rise of Skywalker is not a good movie. Its frenetic pace rushes us through a convoluted plot, any particular moment of which has its own problems. The plausibility of the plot and […]

The End of History in “Avengers: Endgame”

Leading up to Avengers: Endgame, Marvel movies were fairly bad at characterization. A few villains were sophisticated characters you could understand—above all Thanos, who is tragic—but not so the beloved heroes. This tendency to create […]

Family flourishing and the education of killer robots

Netflix’s re-imagining of a sci-fi classic shows what does—and does not—change about the human condition when a family is “Lost in Space.” […]