Vatican City, Jan 24, 2018 / 04:26 am (CNA/EWTN News).- In his message for the World Day of Social Communications, published Wednesday, Pope Francis said that in a world of lightning-fast communication, there is a responsibility to combat falsehood and misinformation with truth, treating journalism as a people-oriented mission.

“In today’s world, [the work of journalists] is, in every sense, not just a job; it is a mission,” the Pope wrote in his message released Jan. 24.

“Amid feeding frenzies and the mad rush for a scoop, they must remember that the heart of information is not the speed with which it is reported or its audience impact, but persons.”

“Informing others means forming others; it means being in touch with people’s lives,” he continued. “That is why ensuring the accuracy of sources and protecting communication are real means of promoting goodness, generating trust, and opening the way to communion and peace.”

Francis’ message for the next World Day of Social Communications was released Jan. 24, the feast day of St. Francis de Sales, the patron saint of journalists.

“In today’s fast-changing world of communications and digital systems, we are witnessing the spread of what has come to be known as ‘fake news,’” the Pope said.

“In this way, I would like to contribute to our shared commitment to stemming the spread of fake news and to rediscovering the dignity of journalism and the personal responsibility of journalists to communicate the truth.”

The best “antidote” to the spread of falsehoods in ‘fake news’ aren’t strategies, he stated, but people.

“People who are not greedy but ready to listen, people who make the effort to engage in sincere dialogue so that the truth can emerge; people who are attracted by goodness and take responsibility for how they use language.”

Everyone has the duty to counter the lies found in ‘fake news,’ he said. But an even weightier responsibility falls upon those whose job it is to provide the world with information, namely, journalists, the “protectors of news.”

Francis went on to encourage everyone to promote “a journalism of peace,” which he said doesn’t mean some saccharine or sentimental reporting that refuses to acknowledge the existence of real and serious problems.

Rather, he emphasized, a journalism of peace is journalism that is “truthful and opposed to falsehoods, rhetorical slogans, and sensational headlines. A journalism created by people for people, one that is at the service of all, especially those – and they are the majority in our world – who have no voice.”

A journalism, he continued, that is less focused on breaking news, and more on exploring the underlying causes of conflicts, so that it can promote a deeper understanding and contribute to resolutions “by setting in place virtuous processes” and offering alternatives to “shouting matches.”

The first ‘fake news,’ Francis said, was that created by the “crafty serpent” in the Book of Genesis, who used falsehood to tempt Eve into disobeying God.

“The strategy of this skilled ‘Father of Lies’ (Jn 8:44) is precisely mimicry, that sly and dangerous form of seduction that worms its way into the heart with false and alluring arguments,” he said.

Eve’s temptation by the serpent “brings to light an essential element for our reflection: there is no such thing as harmless disinformation.”

He pointed out how constant exposure to deceptive language can also have harmful consequences on our interior life, as illustrated by a quote from Fyodor Dostoevsky’s the Brothers Karamazov.

“People who lie to themselves and listen to their own lie come to such a pass that they cannot distinguish the truth within them, or around them, and so lose all respect for themselves and for others. And having no respect, they cease to love, and in order to occupy and distract themselves without love they give way to passions and to coarse pleasures, and sink to bestiality in their vices, all from continual lying to others and to themselves.”

So how do we defend ourselves from this evil, Francis asked. “The most radical antidote to the virus of falsehood is purification by the truth,” which in Christianity is more than just a judgment of things as true or false, he said.

“Truth is something you can lean on, so as not to fall,” he said. “In this relational sense, the only truly reliable and trustworthy One – the One on whom we can count – is the living God. Hence, Jesus can say: ‘I am the truth.’”

“To this end, drawing inspiration from a Franciscan prayer, we might turn to the Truth in person,” he concluded, offering the following prayer: 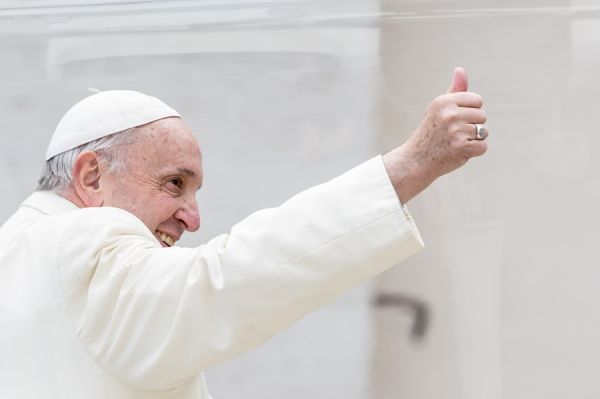 Vatican City, May 29, 2019 / 04:16 am (CNA).- The Holy Spirit is what gives power, life, and dynamism to evangelization, not good rhetorical skills, Pope Francis said Wednesday.

According to St. Luke – Pope Francis said – the words of men become effective not thanks to rhetoric, but thanks to the Holy Spirit, “which has the power to purify the word, to make it the bearer of life.”

The Holy Spirit is what makes the Bible different from a written history, he said at the general audience May 29. The Holy Spirit “helps us to make that word a seed of holiness, a seed of life, to be effective.”

“When the Spirit visits the human word it becomes dynamic, like ‘dynamite,’ that is, capable of lighting hearts and blowing up patterns, resistances and walls of division, opening up new paths and expanding the boundaries of God’s people,” he emphasized.

After a months-long series of reflections on the Our Father, Pope Francis shifted gears into a course of catecheses on the Acts of the Apostles.

This book of the Bible, written by St. Luke the Evangelist, recounts what happens following the resurrection and ascension of Jesus, the pope said.

“The narrative plot of the Acts of the Apostles starts right here,” he said, “from the overabundance of the life of the Risen One transfused into his Church.”

The Acts of the Apostles, he explained, tells of “the journey of the Gospel in the world and shows us the marvelous union between the Word of God and the Holy Spirit that inaugurates the time of evangelization.”

Contrary to what might be imagined, he said the protagonists of the Acts of the Apostles are not the apostles, but “the Word of God and the Holy Spirit.”

Pope Francis reflected on the “the promise of the Father,” communicated to the apostles through Jesus: that “John baptized with water, but in a few days you will be baptized with the holy Spirit.”

“The baptism in the Holy Spirit, in fact, is the experience that allows us to enter into a personal communion with God and to participate in his universal salvific will,” he said.

“There is therefore no struggle to earn or merit the gift of God,” he added. “Everything is given for free and in due time. The Lord gives everything for free, freely. Salvation is not bought, you do not pay, it is a free gift.”

Francis also underlined that the apostles gathered in the upper room, together with Mary and other women, to pray with “perseverance.”

“In fact, it is through prayer that one overcomes loneliness, temptation, suspicion and opens one’s heart to communion,” he said.

“We also ask the Lord for patience in waiting for his steps,” he stated, “to not want to ‘manufacture’ his work and to remain docile by praying, invoking the Spirit and cultivating the art of ecclesial communion.”