“I don’t believe the sun shines in England,” complains Emmeline Erle, “It looks more like a shilling than the sun.” To the young heroine of Meriol Trevor’s classic young adult novel, Lights in a Dark Town, Victorian England seems like a land of gloom. But the darkness goes deeper than she knows, for ignorance, poverty, and the birth-pangs of the Industrial Revolution are wreaking havoc on the souls England’s working class. Yet God sends lights, as the novel shows us, even to the darkest of towns. 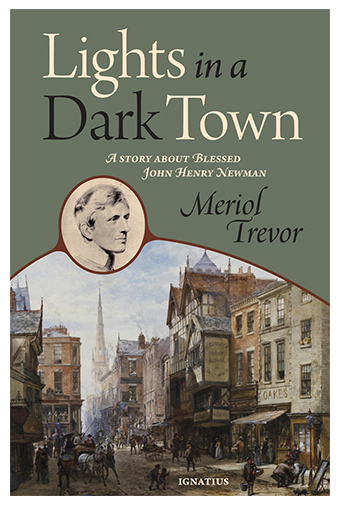 Newly reprinted by Ignatius Press, Trevor’s 1964 work of historical fiction tells a hopeful story of the power of God to overcome spiritual darkness. Even a single Christian, through the power of God’s grace, can bring light and transformation to his portion of the earthly realm. Each of us has a mission in our own place and time, and the story dramatizes Christ’s instruction in the Gospel of Matthew: “Let your light so shine before men, that they may see your good works and give glory to your Father who is in heaven.”

For Meriol Trevor’s protagonist Emmeline, England is a far cry from her home in the sunny climes of Southern Europe. But after her father’s death, Emmeline, along with her mother, must return to England to live cheaply in the industrial town of Birmingham. Its poverty and grime appall, and the Erles’ own straitened circumstances seem to leave them with no friends and dim prospects for the future.

But it is 1849, and something wonderful has occurred in this squalid factory town: John Henry Newman has just founded an Oratory of priests in the heart of the industrial district. With her new friends Daniel and Lizzie, Emmeline finds herself caught up into the great Father’s orbit, as he ministers to the laborers and the poor of the city of Birmingham.

Trevor’s depiction of Blessed Newman remains the most wonderful part of this delightful book. Herself the author of a two-volume biography of the Cardinal that was awarded the prestigious James Tait Black Memorial Prize in 1962, Trevor captures in small moments the greatness, the holiness, and the spiritual insight of the man. Our first glimpse of him comes when the children stop into the Oratory’s humble chapel, and his genuflection before the altar reveals his theology in a way that startles the heroine:

Emmeline had the feeling that it was a courtesy to a person, unlike her own careless bob on entering. She glanced towards the altar almost as if she expected someone to be there, but there was only the tabernacle where the consecrated Host was kept…

Kind and fatherly, Newman takes the children under his wing, instructing them in what true Christianity really means: service of God, patience, and often persecution, but always for the sake of Love. “A saint is a person who loves with God’s love everything that God has made,” Newman tells one of the children. And he is, like Christ, a suffering servant: once a well-known Anglican divine at Oxford with a brilliant career ahead of him, Newman gave up a great deal to become Catholic. Now he serves the poorest of the poor amidst the factories of Birmingham. In a moving episode, the boy Daniel watches as Newman prays at the bedside of an Irish laborer dying of consumption, accompanying him through the painful transition into eternal life. Throughout the book, Trevor depicts Newman’s weariness, his worn-out shoes, his patience in the face of opposition, and his endurance of hostility even from Catholic parochial clergy who mistrust the Oratorian priests.

Indeed, hostility to Catholicism runs deep in the English culture Newman faces in the novel. As he reminds the children, “It’s only twenty years since the penal laws against Catholics were repealed.” Boys in the slums throw mud at him and call him “Pope’s candlestick.” In the middle of the nineteenth century, the Catholic Church in England is enjoying a resurgence, thanks to men like Newman. Anti-Catholic sentiment spikes: the working class, as well as the educated, both hate and fear papal authority, Catholic ritual, and a religion perceived as foreign. At the funeral of a priest, a mob gathers and threatens to burn the Oratory to the ground, but those who enter the building stop, stunned, to listen to Newman pray the funeral prayers. Inside the candle-lit chapel, all is peaceful. It is only outside in the dark streets that the chants of “No Popery!” continue, and one of the children notices, “They’re still raging, the ones outside.” In Trevor’s symbolism, the mob has not yet seen Christ’s Church for what it truly is, and in their ignorance they remain in the darkness to curse the light. And Father Newman insists that it is only a forgivable ignorance that causes such hatred: “So much hostility between people is due to simple ignorance of each other.”

An Oxford-educated Catholic convert herself, Meriol Trevor (1919-2000) wrote numerous books for children and adults, and the time is ripe to restore her to popularity. As a scholar and a historian, Trevor brings Victorian England to life: the slums, the slang, the seismic shift of industrialization. With a helpful glossary of unfamiliar terms, and charming line-drawing illustrations by Hilda Offen, this new edition of Lights in a Dark Town will make great reading for teen and adult readers. We might wish for a more dynamic plot arc for the child heroes: in the best of children’s literature, the protagonists must face some problem, take some journey, or accomplish some task. The children do grow in their faith, but the real dramatic interest of the narrative lies more in Newman’s own sacrificial ministry. Still, it is with great delight that we find an interesting and well-written Catholic young adult novel. Meriol Trevor’s book has faith and sacrifice at its very heart; it doesn’t shy away from the problem of evil, and it never stoops to saccharine moralizing.

In his homily at the Mass of Beatification for John Henry Newman in 2010, Pope Benedict XVI said:

In Blessed John Henry, that tradition of gentle scholarship, deep human wisdom and profound love for the Lord has borne rich fruit, as a sign of the abiding presence of the Holy Spirit deep within the heart of God’s people, bringing forth abundant gifts of holiness.

It is this enduring presence of God, even in places of darkness, that Trevor’s book ultimately dramatizes. Newman, obedient to God’s mission and call, acts in persona Christi in the town of Birmingham; and through his priestly ministry, he makes God present in word and sacrament to the people of England. Emmeline ponders at the end of the novel, “how mysterious it was to think that after coming into a stable at Bethlehem, God would always live round the corner like this, just as He had lived as a carpenter in a village once, and anyone could go in and see Him.” As we hope and pray for the canonization of Blessed John Henry Cardinal Newman, let us follow his example and bring the light of Christ into every dark town.

Our Lady, Easter, and the month of May

Throughout the history of the Church, many believers have expressed surprise that the four canonical Gospels make no mention of the Risen Lord’s appearance to His holy Mother. Some might reply that there would be […]

Vatican City, Apr 16, 2021 / 10:13 am America/Denver (CNA). Pope Emeritus Benedict XVI was born 94 years ago today in the town of Marktl, Bavaria. More than eight years after he announced his retirement […]

The life, faith, and struggle of Joseph Ratzinger: An interview with Peter Seewald

Note: On the occasion of the 94th birthday of Joseph Ratzinger, born on April 16, 1927, CWR is reposting this interview, first posted on January 13, 2021. The veteran German journalist Peter Seewald first met […]