To aid in understanding the year 2017, I read Frederick Lewis Allen’s history of the 1920s, Only Yesterday, which was published in 1931 and has been justifiably acclaimed (and remained in print) ever since. Allen’s book leaves the reader with the impression that the post-war 1920s is the original source of almost every fact and phenomena of contemporary America. For instance, today when we are literally submerged in and, indeed, governed by technology, it is useful to understand a time when mass technology first became “mass.”  But, herewith a few mini-summaries about the book’s treatment of some social and moral developments. 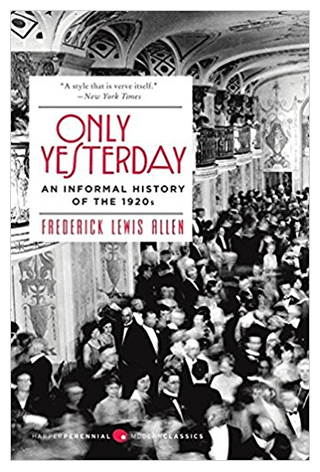 The 1920s saw a “revolution in manners and morals,” according to Allen.  He cited five causes.  First, the disruption and “disillusion” of the first world war with its introduction of Americans to internationalism called into question traditional American habits and ways of thinking.

Secondly, the 1920s was the time when literally every change in the role of women began and became permanent.   But then, unlike today, there was open controversy about it.  The changes in women’s hemlines were openly debated, for example.  The introduction of electric appliances into the home reduced the need for women to be at home, with a consequent increase in the kinds of employment they entered into.

Fourth, sexual behavior itself changed, and contraception was introduced.

Fifth, the most significant development in the sexual revolution of the 1920’s was widespread ownership of the automobile which permanently changed the sexual habits of single men and women, led to the invention of the concept of “dating” by which single men and women could get off by themselves, and consequently caused the Lynds in their best-selling book Middletown to label the automobile a “house of prostitution on wheels.” The divorce rate doubled between 1910 and 1928, and it was in the 1920’s that no-fault (mutual consent) divorce was brought up for the first time.

The disruption of traditional and conventional customs, manners, and morals left people adrift and struggling to articulate a new code of conduct.  In his most famous work, A Preface to Morals, written at the end of the decade, Walter Lippman said that the old religious morality was not relevant to modern society, but, as a substitute, he strenuously advocated a rational humanism, which included a necessary self-restraint and “asceticism,” based on the wisdom of great authors.  Others, however, had no such hesitations and worries, and they argued for the standard which is still dominant to this very day, as stated by Allen: “It doesn’t matter much what you do so long as you’re honest about it.”

Allen was an observer of what we live with today: the decline of religion.  Church attendance held steady, religion was much discussed, and there were many books about religion.  But Allen reports that “something spiritual had gone out of the churches,” and quotes Walter Lippman who said that people had become uncertain whether they would meet God in church.  “The loss of spiritual dynamic,” according to Allen, could be attributed to “the strain of the war,” general prosperity, the growth of Sunday alternatives like golf and automobile touring, the alliance of some religious leaders with the Klan, and the disapproval by part of the public of the involvement in politics by some religious leaders

However, Allen says that the main factor was “the effect on the churches of scientific doctrines and scientific methods of thought.” First was the daily experience of everyone with the new products of science, like the radio and electric home appliances, which led people to think “that science could accomplish almost everything.” Second was the wider dissemination of the theory of evolution to the masses.  Third was the influence of Freudianism and psychology which became the accepted wisdom of the educated.  And which taught that sex was the “central and pervasive force which moved mankind” and which held itself out as a solution to social problems like waywardness and crime.

As for the Scopes trial of 1925, Allen emphasizes that it was a full-blown national event that was reported on daily over the telegraph system to the whole country by a large cohort of journalists in attendance and was also broadcast by a Chicago radio station.  The overall effect was not merely the victory of evolution but the defeat of Christianity and the humiliation of Christianity’s political spokesman of forty years, William Jennings Bryan.  The Scopes trial was one of the new kind of media events made possible by mass technology.  Lindbergh’s flight was another.  Likewise, the glorification of sports heroes was also a product of the rise of national media.

Divorce and the duties of Catholic lawyers

Civil lawyer C. T. Rossi, in his essay Permission for Divorce and the Catholic Lawyer’s Dilemma, complains that “the Church has done little to educate its legal practitioners about their responsibilities as Catholic lawyers”, complains that […]

The much anticipated guidelines reflect what already is common pastoral practice in Poland, emphasizing accompaniment but uncompromising in their fidelity to the Church’s teaching. […]

Fighting the ideologies of contraception, divorce, and gender

Dr. Jennifer Roback Morse is a Catholic author, speaker, academic, and founder of the Ruth Institute (www.ruthinstitute.org), “dedicated to finding Christ-like solutions to the problems of family breakdown.” The Institute “has accumulated decades of research to support individuals and […]