The legacy and papacy of Benedict XVI still looms large over the Catholic Church. This is not due to any ongoing activity on his part; he has lived up to his promise to remain silent in retirement, to devote himself to contemplation and prayer. But his lifetime of teaching and preaching, and the relationships he formed, continue to influence the Church today.

Two prominent examples of his influence are Cardinal Gerhard Ludwig Müller and Cardinal Robert Sarah. Cardinal Müller, former Prefect of the Congregation for the Doctrine of the Faith (a post Benedict held as Joseph Ratzinger for more than 20 years), has a longstanding friendship with Benedict, and has been immeasurably influenced by his thought over many years. He was named as Prefect by Pope Benedict in 2012, but his mandate was not renewed by Pope Francis when it ran out in July 2017. 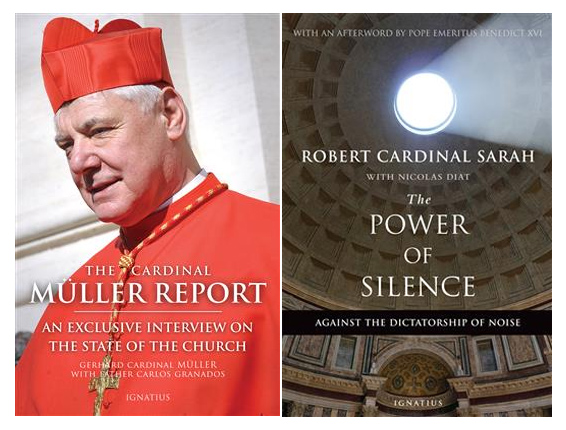 Cardinal Sarah is currently the Prefect of the Congregation for Divine Worship and the Discipline of the Sacraments. In 2010, Pope Benedict XVI named him President of the Pontifical Council Cor Unum, and he was named to his current post by Pope Francis in November of 2014.

There is another thing these men have in common: both have recently had book-length interviews published by Ignatius Press, and in both cases, there are unmistakable marks that point towards Joseph Ratzinger as a major influence on the thought of both men.

If there is one thing that is clear from the first page of the recent interview book with Gerhard Ludwig Cardinal Müller, it is that the until-recently-Prefect of the Congregation for the Doctrine of the Faith is in perfect continuity with his predecessor-but-one, Joseph Cardinal Ratzinger, now Pope Emeritus Benedict XVI.

This continuity is not only to be found by the keen-eyed: it is explicitly identified by the author and interviewer, Father Carlos Granados, and can even be found in the title of the book. The Cardinal Müller Report is a direct reference to the groundbreaking book-length interview conducted by journalist Vittorio Messori called The Ratzinger Report.

The interview was originally conducted in Spanish, with three books on the table between the men: the Bible, the Catechism of the Catholic Church, and a Spanish-German dictionary. That and the mind of the cardinal was all that was needed. In the book’s Introduction, the interviewer explains that, “The parallelism is certainly intended as a homage to the friendship between the current prefect and the pope emeritus; but it is also, above all, intended to bring to bear the focus of that interview. In it, Ratzinger completely and accurately diagnosed the situation of the Church, its causes and its effects, and also proposed some paths to a solution. It can be said that ensuing events have validated his focus, which was the subject of so much argument at the time” (x-xi).

Time and again throughout the book, Cardinal Müller refers to the thought of Joseph Ratzinger/Pope Benedict XVI as a means of organizing or bookending his remarks. His close relationship with the pope emeritus has allowed him a special insight into his mind, and they are certainly of one mind in most instances.

The Cardinal Müller Report has a somewhat different flavor to it now, in retrospect. The book came out a matter of months before Cardinal Müller was replaced as Prefect of the Congregation for the Doctrine of the Faith. As with so much during the current papacy, this move has been met with no little suspicion and speculation. One seems to be able to detect a certain amount of hesitation or cautious wording in some of Müller’s responses; perhaps a hesitation that he would not have employed had he already been out of his post, something suggested by more blunt comments made by Cardinal Müller in recent months.

For many, Cardinal Robert Sarah (pronounced Suh-RAW) was a surprise choice for Prefect of the Congregation for Divine Worship and the Discipline of the Sacraments. For those who accept a narrative of discontinuity between Pope Francis and what came before, Cardinal Sarah may have been the last person on earth they expected to be appointed.

In fact, his most recent book-length interview, titled The Power of Silence, includes an Afterword written by none other than the Pope Emeritus, Benedict XVI. In this Afterword, he praises Cardinal Sarah’s insights and wisdom, as well as his humility. “Of course he speaks hardly at all about himself,” Benedict writes, “but now and then he does give us a glimpse into his interior life.” This could well be said of the Pope Emeritus himself. Seldom focused on himself or his own accomplishments and wisdom, he always strove to point the reader or listener to God, to contemplate the face of Jesus Christ.

Joseph Ratzinger, the great professor, the magister that the Church so sorely needed in its fight against what he called the dictatorship of relativism and other evils, has always understood the value of words—including knowing when to use few, or none. In his efforts to encourage silence and silent, intimate communion with God, Cardinal Sarah echoes the sentiments of Benedict XVI.

It is difficult to count the number of times through The Power of Silence that Cardinal Sarah quotes the work of Joseph Ratzinger-Pope Benedict XVI. However, the sheer number of these quotations demonstrates how unified the teaching of these two men is. In addition, these quotations together can serve as a sort of programmatic summary of the thought of Cardinal Robert Sarah.

At one point, the cardinal quotes from Cardinal Ratzinger’s book A New Song for the Lord: “Wherever God’s word is translated into human words there remains a surplus of the unspoken and unspeakable which calls us to silence.” Cardinal Sarah continues, “God reveals himself, but our human words fail to express his immensity, depth, and mystery. He forever remains beyond our words. And how small God would be if we understood him!” (127) These words may as well have been written by Cardinal Sarah!

It is no surprise that the pope emeritus would have such kind and intimate words in regards to Cardinal Sarah’s book about silence. Especially in the context of the liturgy, this was something near and dear to his own heart.

Again, quoting Cardinal Ratzinger during a discussion of the liturgy: “‘If we do not understand the place of silence, we run the risk of bypassing the Word of God, also. Therefore we must enter into this depth of silence in which the mystery greater than all human words is communicated. This step is essential…. God is above all the great silence. It is necessary to escape the multiplication of words in order to rediscover the Word. If there is no silence by which to enter into their depth, the words themselves become incomprehensible. And the liturgy, the presence of the great mystery of God, must therefore be also the place where we have the opportunity to enter into the depths of our souls’” (128, emphasis added).

Cardinal Sarah quotes the writings of Joseph Ratzinger over and over again, and always in strong agreement. Perhaps the most typical quotation, and one which really speaks to the hearts of both men, is from Ratzinger’s “The Regensburg Tradition and the Reform of the Liturgy” (which appears in Joseph Ratzinger Collected Works: Theology of the Liturgy), in reference to the Eucharistic Prayer: “Must we not relearn this silent, inner co-praying with each other and with the angels and saints … and with Christ himself,” so that we do not lose “the real inner event of the liturgy, the departure from human speech into being touched by the eternal”?

The words of the pope emeritus in the Afterword to Cardinal Sarah’s book help to illustrate the unity of these two great and unfathomable minds – and hearts. “We should be grateful to Pope Francis for appointing such a spiritual teacher as head of the congregation that is responsible for the celebration of the liturgy in the Church,” he writes. “With the liturgy, too, as with the interpretation of Sacred Scripture, it is true that specialized knowledge is necessary. But it is also true of the liturgy that specialization ultimately can talk right past the essential thing unless it is grounded in a deep, interior union with the praying Church, which over and over again learns anew from the Lord himself what adoration is. With Cardinal Sarah, a master of silence and of interior prayer, the liturgy is in good hands.”

About Paul Senz 90 Articles
Paul Senz has an undergraduate degree from the University of Portland in music and theology and earned a Master of Arts in Pastoral Ministry from the same university. He has contributed to Catholic World Report, Our Sunday Visitor Newsweekly, The Priest Magazine, National Catholic Register, Catholic Herald, and other outlets. Paul lives in Elk City, OK, with his wife and their four children.

Revisiting “The Spirit of the Liturgy”

Last year was a year of many anniversaries. One that was perhaps less noticed was the fortieth anniversary of Ignatius Press. As part of that observance, its founder, Father Joseph Fessio, decided to reprint what […]

Analysis: How the Vatican is preparing for its February abuse summit

Vatican City, Dec 19, 2018 / 12:00 pm (CNA).- Preparations in the Vatican are underway for a summit of the bishops to discuss the problem of clerical sexual abuse. The meeting, which will involve the […]

“Mary said, ‘Behold, I am the handmaid of the Lord. May it be done to me according to your word.’” —Luke 1:38 Today, especially in those communities within the Church in which the new evangelization is […]