Those promoting the cause of sainthood for a candidate must gather witnesses and testimonies, writings and documentation of the candidate’s life.

Throughout the process, evidence is brought before various tribunals (a type of court within the Church) both in the local diocese and in Rome, all of whom examine the life and works of the candidate and determine whether the miracles attributed to them are authentic, and whether their life constitutes heroic virtue, among other things.

It’s a process intentionally designed to take years, and those involved in the process come to know their candidate for sainthood in a particularly intimate way.

That has been the case for Fr. Larry Webber, OFM Cap, who currently serves as the vice postulator of the cause for Fr. Solanus Casey, who will be beatified this weekend.

The priest and Capuchin friar, who has officially worked on the cause for the past five years, said the work has led his own life to be marked by Fr. Solanus’ spirituality.

“It’s meant a lot to me” to work on the cause, Webber told CNA. “I hope I’ve always been a man of prayer, but certainly (this) has really deepened in me an appreciation for his spirituality and his faith which is marking my life.”

“I think many people who have had a devotion to Fr. Solanus over the years would say that,” he added. “There’s something about him that marks the way you pray, that marks your faith, that  leads you to a deeper relationship with God…especially in the Eucharist.”

The friars who lived with Fr. Solanus would often find him in the morning lying on the floor in front of the Blessed Sacrament, where he had spent all night interceding for the hundreds of people who had sought his prayers.

“His line was always, ‘Oh don’t worry, I sleep on the soft side of the floor,’” Webber said.
He added that while he admired Fr. Solanus’ “Irish wit”, he also admired his ability to sacrifice and be humble about it without being pretentious.

Herkenrath told CNA that she remembers first meeting Fr. Solanus as a teenager during a big family reunion. She had heard some stories about this holy uncle of hers whose intercession had healed people, but she wasn’t sure what to make of it all.

“Teenagers are sometimes skeptical about things like this, and I was a little skeptical about him,” she said. “I thought, who is this man? What’s he like? How do I act around him?

“Well he got (to the family reunion), and he was as normal as his brothers and sisters,” she said. “He was so normal that my (hesitation) just disappeared, I was very comfortable with him, and he was just one of us. He played ball with the younger kids, he talked with everybody, he was just normal.”

The family didn’t talk much about the specific favors attributed to Fr. Solanus, Herkenrath said. One of Solanus’ brothers, also a priest, had told the family that those matters were “between God, the Capuchins, and Solanus.”

It was only after his death that she became involved in his cause for canonization, and started learning more about his life. For her part, she helped gather some recordings of Fr. Solanus that her dad had made of him on some old 7-inch 78 rpm records – recordings of Solanus saying a prayer, greeting the family, reciting a poem, and singing and playing the violin.

One of the most striking characteristics of Fr. Solanus is his profound humility and acceptance of God’s will in all things, Webber said.

Never able to make good grades in seminary, which was taught all in Latin at the time, Fr. Solanus was only ever allowed to be a simplex priest for the order, meaning he wasn’t allowed to preach or hear confessions.

Instead he was assigned as the porter, the doorkeeper, at the time a lesser role usually reserved for novice friars.

But it was a job “he accepted it humbly, joyfully, and in that obedience and that humility, God transformed him into a saint,” Webber said.

“And I think many of us in our world today need that same lesson – humbly accept the reality you are given, joyfully serve the Lord in it, and he’ll make you holy.”

“(Fr. Solanus) once said to someone: ‘What does it matter where we are sent? Wherever we are, we can serve God,’” Webber added.

Another characteristic of Fr. Solanus that Fr. Webber said he admired was the friar’s pastoral ability to help people take life a little less seriously.

As an example, Webber recalled one story where some good friends of Fr. Solanus were returning from vacation, and they stopped by the monastery to say hello to the friar.

After chatting for a bit, the friends told Fr. Solanus that they were hungry, but they weren’t sure what they were going to eat, because the only thing they had left in their cooler were some hotdogs. It was Friday, and the Church at the time required the faithful to abstain from meat on that day every week.

“And (Fr. Solanus) said: ‘Well how long have those hotdogs been in there?’ And they said: ‘Oh about a day or two.’ And he said: ‘Oh don’t worry, they’re fish by now,’” Webber recalled.

“He had a good sense pastorally,” Webber noted, to take the faith seriously, but also, when appropriate, “not to take things overly seriously.”

Having a brother within his own community being beatified has also caused Webber to examine his own holiness and call as a Capuchin, he added.

“And if God has raised up one among us…that is being recognized for his holiness, that calls each of us to say, ‘Well, what do I need to be doing to be a little bit more holy?’”

Fr. Solanus Casey will be beatified on November 18th at Ford Field in Detroit, Michigan. 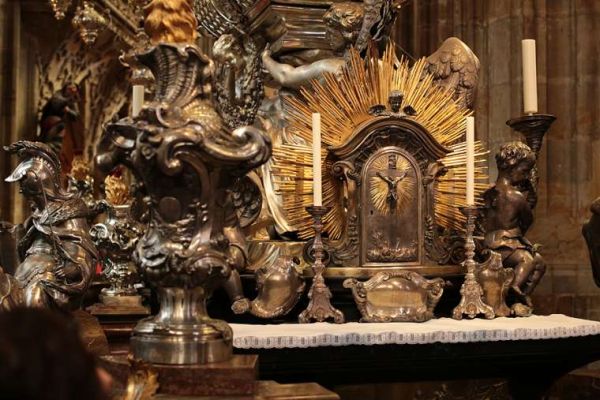 El Paso, Texas, Nov 12, 2019 / 12:18 am (CNA).- The pastor of a Catholic parish in El Paso, Texas is calling for prayer and reparation after a tabernacle containing the Eucharist was stolen from the church.

On Oct. 28, Holy Spirit Parish in Horizon City was broken into by unknown individuals.

“It is with a very saddened heart that I write these words to you,” said Father Jose Morales, pastor of the parish, in a Nov. 1 letter. “Sunday night into Monday morning we had some intruders in the church that caused damages and stole items including the tabernacle with the Blessed Sacrament.”

The incident resulted in minor property damage and stolen items equal to a few thousand dollars, the priest said. He stressed that the worst aspect of the attack was the theft of the Eucharist, the value of which cannot be estimated. Catholic teaching holds that the consecrated Eucharist is the body and blood of Christ.

“The desecration of the greatest gift possessed by the Church, the Most Blessed Sacrament, is a very serious matter,” he said.

He encouraged anyone with any information on the crime to contact the Horizon Police Department. He also asked parishioners to respond to the theft with acts of penance.

“The indifference of the world towards God in the holiness Most Blessed Sacrament needs to be overcome with the devotion, love and the holiness of His children. Let us remain united and strong in the Lord and manifest that we are his faithful followers regardless of the violations that some express.”

Roberto Ceballos, a parishioner of 20 years, told KVIA that the theft made him feel unsafe in the neighborhood.

“When we heard the news about it, we felt bad…We couldn’t believe that it had happened here, of course, in the neighborhood and of course in a Catholic church,” said Ceballos.

“I don’t feel secure now… It’s just a half-block away from my house,” he added.

Morales said it is difficult to understand the reasons behind the theft, but he urged the perpetrators to come forward and return the tabernacle.

“I don’t see the reason for something like this being done. We know God is merciful and if they would return what they took and repent it would be greatly appreciated, not just by us, but God will take that into account,” he told KVIA.

The priest encouraged his congregation to pray that the thieves repent and change their ways, and he asked Our Lady of Guadalupe to intercede for the parish.

“May our Blessed Mother, Our Lady of Guadalupe, who witnessed the acts of hatred and indifference towards her beloved Son, bring us consolation and guide us closer to the Sacred Heart of our Lord Jesus Christ. May the Holy Spirit protect us always,” he said in his letter to parishioners.

Apostolic nuncio to US to hold webinar on Fratelli Tutti