Jean Twenge’s book iGen is one of the most fascinating—and depressing—texts I’ve read in the past decade. A professor of psychology at San Diego State University, Dr. Twenge has been, for years, studying trends among young Americans, and her most recent book focuses on the generation born between 1995 and 2012. Since this is the first cohort of young people who have never known a world without iPads and iPhones, and since these devices have remarkably shaped their consciousness and behavior, Twenge naturally enough has dubbed them the “iGen.” 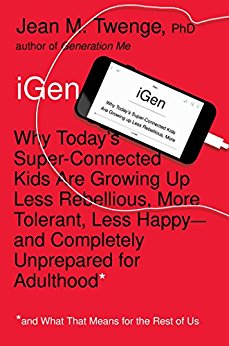 One of her many eye-opening findings is that iGen’ers are growing up much more slowly than their predecessors. A baby-boomer typically got his driver’s license on his sixteenth birthday (I did); but an iGen’er is far more willing to postpone that rite of passage, waiting until her eighteenth or nineteenth year. Whereas previous generations were eager to get out of the house and find their own way, iGen’ers seem to like to stay at home with their parents and have a certain aversion to “adulting.” And Twenge argues that smartphones have undeniably turned this new generation in on itself. A remarkable number of iGen’ers would rather text their friends than go out with them and would rather watch videos at home than go to a theater with others. One of the upshots of this screen-induced introversion is a lack of social skills and another is depression.

Now there are many more insights that Dr. Twenge shares, but I was particularly interested, for obvious reasons, in her chapter on religious attitudes and behaviors among iGen’ers. In line with many other researchers, Twenge shows that the objective statistics in this area are alarming. As recently as the 1980s, 90% of high school seniors identified with a religious group. Among iGen’ers, the figures are now around 65% and falling. And religious practice is even more attenuated: only 28% of twelfth graders attended services in 2015, whereas the number was 40% in 1976. For decades, sociologists of religion have been arguing that, though explicit affiliation with religious institutions was on the decline, especially among the young, most people remained “spiritual,” that is to say, convinced of certain fundamental religious beliefs. I remember many conversations with my friend Fr. Andrew Greeley along these lines.

But Twenge indicates that this is no longer true. Whereas even twenty years ago, the overwhelming number of Americans, including youngsters, believed in God, now fully one third of 18 to 24 year olds say that they don’t believe. As late as 2004, 84% of young adults said that they regularly prayed; by 2016, fully one fourth of that same age cohort said that they never pray. We find a similar decline in regard to acceptance of the Bible as the Word of God: one fourth of iGen’ers say that the Scriptures are a compilation of “ancient fables, legends, history, and moral precepts recorded by men.” Her dispiriting conclusion: “The waning of private religious belief means that young generations’ disassociation from religion is not just about their distrust of institutions; more are disconnecting from religion entirely, even at home and even in their hearts.”

Now what are some of the reasons for this disconnect? One, Twenge argues, is the iGen preoccupation with individual choice. From their earliest years, iGen’ers have been presented with a dizzying array of choices in everything from food and clothes to gadgets and lifestyles. And they have been encouraged, by practically every song, video, and movie, to believe in themselves and follow their own dreams. All of this self-preoccupation and stress upon individual liberty stands sharply athwart the religious ideal of surrendering to God and his purposes. “My life, my death, my choice” (a rather iGen friendly motto which I recently saw emblazoned on a billboard in California) sits very uneasily indeed with St. Paul’s assertion, “whether we live or we die, we are the Lord’s.”

A second major reason for iGen dissatisfaction with religion is one that has surfaced in lots of surveys and polls, namely, that religious belief is incompatible with a scientific view of the world. One young man that Twenge interviewed is typical: “Religion, at least to people my age, seems like it’s something of the past. It seems like something that isn’t modern.” Another said, “I knew from church that I couldn’t believe in both science and God, so that was it. I didn’t believe in God anymore.” And a third—also attested to in lots of studies—is the “antigay attitudes” supposedly endemic to Biblical Christianity. One of Twenge’s interviewees put it with admirable succinctness: “I’m questioning the existence of God. I stopped going to church because I’m gay and was part of a gay-bashing religion.” One survey stated the statistical truth bluntly enough: 64% of 18-24 year olds believed that Christianity is antigay, and for good measure, 58% of those iGen’ers thought the Christian religion is hypocritical.

Dismal stuff, I know. But Dr. Twenge performs a great service to all those interested in the flourishing of religion, for she lays out the objectivities unblinkingly, and this is all to the good, given our extraordinary capacity for wishful thinking and self-deception. Further, though she doesn’t tell religious educators and catechists how to respond, she unambiguously indicates what is leading this most unreligious generation in our history away from the churches. Her book should be required reading for those who wish to evangelize the next generation.

Is the doctrine of hell a legitimate motivation for evangelization?

Each disciple of Christ is called in some way to participate in the work of redemption. As a Lay Dominican, I take the persons of Saint Dominic and Saint Catherine of Siena as guiding lights […]