The challenge of finding language in which believers and non-believers can communicate is unintentionally illustrated in a bestselling new book which predicts that human beings will soon reinvent themselves as gods.

The book, Homo Deus (Man God), is the work of Yuval Noah Harari, an Israeli historian who achieved fame several years ago with another bestseller, Sapiens (as in “homo sapiens,” that is). The earlier volume presented an overview of human history and pre-history up to now. Homo Deus, published by HarperCollins, is, in the words of its subtitle, “a brief history of tomorrow.” 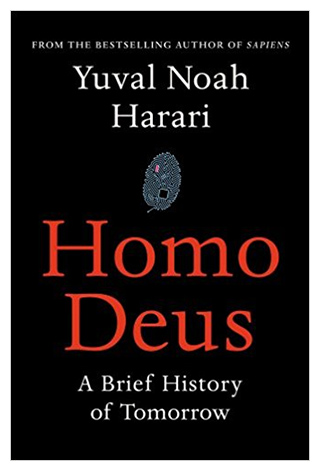 Along with providing a guided tour to current developments in science and technology, Harari argues a thesis: The great project of humankind in this century, he says, will be “to acquire for us divine powers of creation and destruction, and upgrade Homo sapiens into Homo deus….we may well think of the new human agenda as consisting really of only one project (with many branches): attaining divinity.”

I leave to others the credibility of this from the technological and scientific perspectives. The book is an interesting read and worth pondering. But its vision of human deification rests on a misunderstanding.

As an atheist, Harari doesn’t mean “god” in the sense in which believers speak of God—a being eternal, all-powerful, omniscient and omnipresent, creator and father of all. He means beings with life spans greatly extended by science and intelligence enhanced by technology to the point of being super-smart.

What he doesn’t mean, because his atheist creed doesn’t allow it, is beings of whom it could rightly be said that they are transcendent. Nor, obviously, does he believe in the transcendent God of theism. (But neither, perhaps, do believers whose appreciation of “transcendence” as applied to God is scant.)

The problem this presents was underlined a few years ago by historian Brad S. Gregory in his similarly provocative book The Unintended Reformation (Harvard University Press). In much of the literature that takes God’s non-existence more or less for granted, Gregory wrote, “the God being imagined and whose reality is denied or doubted is not the God of traditional Christianity”—a transcendent God. But if there be such a God as that, he tellingly adds, “a transcendent God is by definition not subject to empirical discovery or disproof.”

Atheists generally fail to grasp that. Here, then, is the communication gap between them and believers. Since they do not reckon with what transcendence might mean, atheists like Yuval Harari fail to comprehend what belief in the transcendent God of faith might be like. And unless and until they have at least some faint apprehension of what a transcendent being might be like, there is no arguing with them about whether such a being exists.

Harari’s own faith in what science and technology have in store may be excessive. But even if he’s spot on, his vision  doesn’t shatter any pillars of faith for those who grasp that “eternal” doesn’t mean unlimited existence in time but a manner of existing—literally beyond imagining now because outside our time-bound experience—entirely beyond the limitations of living in time.

For some hint of what that means, we have to turn to a mystic like St. Teresa of Avila, who says repeatedly that her experience of God can’t be described in words because there are no words to describe it. That transcendent God bears no resemblance to the transformed human beings of Homo deus. On the subject of God, it seems, atheists and believers are talking past one another.

About Russell Shaw 263 Articles
Russell Shaw was secretary for public affairs of the National Conference of Catholic Bishops/United States Catholic Conference from 1969 to 1987. He is the author of 20 books, including Nothing to Hide, American Church: The Remarkable Rise, Meteoric Fall, and Uncertain Future of Catholicism in America, Eight Popes and the Crisis of Modernity, and, most recently, The Life of Jesus Christ (Our Sunday Visitor, 2021).

In Pennsylvania, Carmelites plan a “micro village” according to St. Teresa’s vision

Eleven Discalced Carmelite Sisters of Fairfield, Pennsylvania are establishing a new monastery on a 40-acre, hilltop site in the Diocese of Harrisburg, just eight miles from the historic town of Gettysburg. The nuns were originally […]

The Art of Imaginative Apologetics

Dr. Holly Ordway (www.hollyordway.com) is Professor of English and Director of the MA in Cultural Apologetics at Houston Baptist University. She holds a Ph.D. in English literature from the University of Massachusetts Amherst. Her academic […]

How can we suffer well? 10 quotes from St. Teresa of Ávila