In his new book, Cheap Sex: The Transformation of Men, Marriage and Monogamy (Oxford University Press), sociologist Mark Regnerus examines the impact the Pill, pornography, and online dating have had on marriage and relationships.

Regnerus, an associate professor at the University of Texas at Austin and a senior fellow at the Austin Institute for the Study of Family and Culture, received international attention several years ago for his New Family Structures Study. That study, published in 2012, demonstrated differences in outcomes between children with a parent who has same-sex relationships and those who are raised by their married, biological parents. 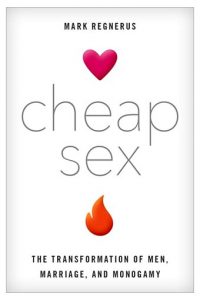 Leslie Fain, for CWR: What prompted you to write Cheap Sex?

Mark Regnerus: Two things: first, a few key social psychologists and economists helped me see the problem at a “macro” level, and then second, I started tracking how the problem was manifesting itself at the personal level.

CWR: In your book, you describe “cheap sex” as a mentality that has been facilitated by the popularity of the Pill, mass-produced pornography, and online dating/meeting services. What is cheap sex, and how is it impacting relationships, sex, and marriage in the West?

Regnerus: Cheap sex is the reality that access to sexual experiences has gotten easier, or “cheaper,” over the past several decades. It has speeded up how quickly relationships become sexual, slowed down the progress of those relationships toward marriage, and made many men and women less certain about the person they’re with.

CWR: What is the exchange relationship, and why do you describe it as “deeply human”?

Regnerus: Men and women seek to be in relationship with each other, but they tend to value different things and exhibit different strengths, desires, and resources—hence the need for an exchange relationship in which each person gives the other something they lack in trade for something they are seeking. Sexual intercourse is an example of exchange. More often than men, women’s sexual interests, as I say in the book, “include the affirmation of desirability, expressing and receiving love, the validation of worth, and fostering or reinforcing relationship commitment. Men can appreciate each of those too, and plenty do, but they will tend to be secondary or tertiary reasons for sex.” The notion of exchange is not the only way to understand the matter, and sex is of course not reducible to transaction. But whether we wish to admit it or not, there is this aspect to it. Why is it deeply human? Because it’s as old as we are.

CWR: Why should married people be concerned about the cheap sex mentality?

Regnerus: Because marriage is not “cheap-sex proof.” Cheap sex is a reality now, and it’s no respecter of our deepest commitments.

CWR: Marriage and sexual relationships have undergone many changes since the 1960s. In your book, you write that the “institutional” model of marriage, which gave way to the “soulmate” model of marriage, has now developed into something completely distinct: the “Pure Relationship.” What is the “pure relationship,” and how does it differ from institutional marriage and soulmate marriage models (besides the fact a lot of these couples aren’t marrying)?

Regnerus: In romantic love—including the soul-mate model—there may be stops and starts, but as I say in the book, “the quest is for settled-ness, the destination is a family, and the assumption is distinctiveness (and magnetism) between men and women.” This sort of relationship seeks to solidly preserve the object of care and add to the world, to expand by giving itself away to the object of love. It’s vulnerable to our whims and wishes—which leads to no shortage of divorces—but it’s still couple-focused. The “pure” relationship, an idea identified by British social theorist Anthony Giddens 25 years ago, is far more contingent, individualist, and fragile. From the book: “equality is its organizing principle, taste and emotion are its barometers, discovery is a key goal, and while the couple is the basic structure to the union, it is never to usurp the individual’s primacy and will.” It’s a relationship form and mentality that is inherently less stable than even the soul-mate model.

Regnerus: Giddens held that gay and lesbian relationships were “in the vanguard of the pure relationship form,” which meant that their relationships would most clearly exhibit the traits of this new form of relating, and I see evidence of it in the higher number of gay partners, the shorter duration of relationships, and their greater proclivity toward sexual technologies like pornography. Bisexuality in particular seems to be a symptom of this shift—a state in which everyone is a potential partner. Moreover, the elevation of sexual identity as an individual trait is itself symptomatic of the rise in the focus on the sexual self and the decline in focus on unions and relationships. But even though they may be the vanguard, gays and lesbians have not remained alone in that. The “pure” relationship mentality and its practices have colonized heterosexual relationships, including marriage.

CWR: Are you or other sociologists predicting what comes after the “pure relationship”? Can you envision a time when American sex and dating habits begin to mimic those in Japan, where many young people seem to have given up on relationships altogether?

Regnerus: That’s hard to say. Japan is a rather different culture, with unique traditional pressures that have combined with the same modern mating-market dynamics that young adults everywhere feel. The answer to your question may hinge on how dependent Americans become on new sexual technologies—like sex robots or artificial intelligence that “learns” and talks back to us. I don’t see any emerging legal concern about those things. Marriage could become a minority practice, for sure. But it won’t disappear altogether.

These statistics represent evangelical and Catholic weekly church-goers, I believe. Can you give any advice on what Catholic clergy, catechists, and parents can do to shore up religious beliefs about marriage and sexuality?

Regnerus: It’s hard to believe that we have to keep saying it, but if you want your parish and its families to remain distinctively Catholic in both mind and practice, you simply must assume that the flock is very vulnerable to shifting well away from Catholic understanding of marriage and sexual union. Clergy, catechists, and parents tend to remember when they speak plainly about sex and relationships—since it’s difficult to do—but they’re not nearly as repetitive and “on message” as popular media is. Our attention is being sought, and won, by forces very unfriendly to Catholic perspectives on sexuality and marriage.

Regnerus: About pornography, I’m not very hopeful. It lends itself to compulsivity. Liberals recognize it’s become a problem but don’t wish to appear prudish. Conservatives know it’s a problem, but are wed to free speech. Technology worms its way into every corner of our social lives, and demand for pornography remains high. If there is money to be made, the American capitalist sensibility has no loyalty to virtue.

CWR: You write more than once that Cheap Sex is not a clarion call to return to a simpler time, partly because that isn’t going to happen. What can people who care about marriage and family—the parents, teachers, clergy, policy makers, etc.—do with the information you’ve provided in an effort to change things around?

Regnerus: The primary reason I wrote the book is to explain our situation, not to map the way out of it. I don’t have good advice about what can reverse this. However, I think the book enables us to better “see” the situation we’re in now, and knowledge can be extraordinarily helpful. We know there’s something wrong. We tend to blame ourselves, or men, or women, or to criticize “the culture” as having become decadent. But we didn’t get to this point without the technology—the Pill, porn, and online dating—that has made sex easier and hence “cheaper.” Understanding how it happened is a good first step toward helping people to navigate the relationship scene more prudently and chastely. Change can happen, but it starts with seeing the problems more clearly.

About Leslie Fain 21 Articles
Leslie Fain is a freelance writer who lives in Louisiana with her husband and three sons. You can follow her on Twitter here.

When some Christians affirm traditional moral teaching, other Christians freak out

The angry responses to the Nashville Statement reflect the sort of “moral therapeutic deism” that has increasingly dominated the public square in recent years. […]

CNA Staff, Feb 8, 2021 / 07:01 pm (CNA).- Pro-life organizations have reacted to the arrest and apparent confession of a former employee on child pornography allegations, emphasizing the need to ensure that children are protected.

“Woman” undefined and the destruction of words (and sex)

Some weeks ago, as readers undoubtedly know, Supreme Court and Harvard educated nominee Judge Ketanji Brown Jackson, though a woman herself, pleaded a lack of expertise when asked to define the word “woman.” Ridicule resonated […]