The thesis developed by Douglas Murray in The Strange Death of Europe is that “the civilization we know as Europe is in the process of committing suicide and that neither Britain nor any other Western European country can avoid that fate because we all appear to suffer from the same symptoms and maladies.” More specifically, “Europe today has little desire to reproduce itself, fight for itself or even take its own side in an argument.” Indeed, European elites “seem persuaded that it would not matter if the people and culture of Europe were lost to the world.” So as to dispel any doubt about the gravity of his prognosis, Murray asserts that Europeans currently alive will have lost the only place in the world they call home “by the end of [their] lifespan”. 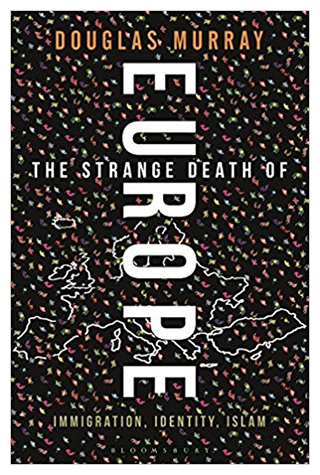 This dire situation came about as a result of two simultaneous sets of events: first, the mass movement over the past few decades of millions of people into Europe, a movement which has resulted in “the home of the European peoples” becoming “a home for the entire world”; and second, the loss by Europeans of their “beliefs, traditions and legitimacy”, a loss which has brought about an “existential civilizational tiredness” – a pervasive feeling that Europe has run out of steam. Although not unique to that continent, this existential tiredness has occurred at precisely the moment when millions of non-European migrants began to move in. And although large migrations into a society confident about its identity might well have positive results, “the movement of millions of people into a guilty, jaded and dying culture cannot”, especially when many of the millions in question have a strong religious faith and culture, the history of which is characterized by relentless and prolonged conflicts with Christendom.

If Europe is to become a home for the world, says Murray, it must define itself on the basis of criteria that are vague enough to encompass the world. That can only be achieved through the erosion of elements traditionally associated with European identity: the rule of law, separation of Church and State, freedom of speech and religion, equality between the sexes, and so forth.

This cultural and moral erosion is already well advanced, as attested by the fact that European leaders nowadays speak as if the entire ethics and beliefs of Europe could be reduced to the broad notions of “respect”, “tolerance”, and especially “diversity”. According to Murray, “such shallow self-definitions may get us through a few more years, but they have no chance at all of being able to call on the deeper loyalties that societies must be able to reach if they are going to survive for long.”

This moral shallowness is largely due to the fact that most Europeans, while acknowledging that the culture of human rights derives from the Christian tradition, show little interest in renewing with the latter. Murray mentions a recent survey showing that affiliation to Christianity in the UK by 2050 will have fallen by a third, from almost two-thirds in 2010, and will thus become a minority affiliation. The same trend can be observed in other European countries. In France, the Eurobarometer Poll conducted in 2010 indicated that 27% of French citizens responded that “they believed there is a God”, 33% answered that “they believe there is some sort of spirit or life force”, and 40% answered that “they do not believe there is any sort of spirit, God, or life force”. It is no wonder then that new mosques are popping up in every major French city while the French Observatory of Religious Heritage states that France could lose “5,000 to 10,000 religious buildings by 2030.”

Muslims migrating to Europe show little to no desire to join in this secularist momentum. Whether it be in Paris, Birmingham, Berlin, Amsterdam, Rome or Malmo, they are building theirs mosques and worshipping as they did in their countries of origin. In the Paris arrondissement of Seine Saint Denis alone, there are some 230 mosques. At Friday prayers, worshippers spill out onto the streets and several mosques are seeking larger facilities to meet the demand. The result is that the neighborhoods where the immigrants live bear little resemblance to those where the locals live. In many cases, they have become “no go” areas where authorities have simply lost control due to the high number of immigrants. There are now more than 1,000 such areas in Europe.

All this perhaps explains Turkish President Tayyip Erdoğan recent exhortation to Turkey’s citizens in Europe to step up their rates of procreation and have five children each so as to counter the European Union’s “vulgarism, antagonism, and injustice”. What most people in the West fail to recognize is that there are essential ideological and political aspects to Islam that cannot be treated separately from religious aspects. Many Western historians and intellectuals (Bertrand Russell, Arthur Koestler, Bernard Lewis) as well as prominent Islamic theorists of the twentieth century (Hassan al-Banna, Sayyid Qutb and Maulana Mauduni) have emphasized the similarities between Islam and communism.

The first thing that might be said about The Strange Death of Europe is that it is a courageous book. Murray sheds light on the failure of European countries to assimilate Muslim immigrants. In doing so, he exposes himself to the scourge of political correctness and has indeed been accused of “gentrified xenophobia” and racism by the leftist commentariat. In a typical case of dereliction of duty, the latter refuses to address the problems raised by massive inflows of migrants for fear of being stigmatized. Murray’s greatest merit is to have shown beyond doubt that the concerns of the vast majority of Europeans about the surge of immigration in recent years are well founded, and to have done so while at the same time emphasizing the need to accommodate the needs of important numbers of asylum seekers.

For Christians, and particularly Catholics, Murray’s book has the additional merit of raising some big questions about the future of the faith. While Murray limits his prognosis to Europe, and particularly to Western Europe, it should not be ignored by North Americans. Although neither Canada nor the U.S. are likely to experience the massive inflows of Middle East migrants registered recently by Europe, they do share a very significant decline in religious practice, especially among younger generations. It is hard, perhaps impossible, to imagine how the current trend towards ever increasing secularization might be slowed down, let alone reversed, in the short or medium term. Murray’s analysis is thus relevant to those of us in North America, although we can take some small solace in the fact that we appear to lag behind in terms of dechristianization.

A second observation is that the idea of European or Western decline is not entirely new. Oswald Spengler’s The Decline of the West (1918) or Patrick Buchanan’s The Death of the West (2001) immediately come to mind. The most thorough study of civilizational decline, however, might well be Arnold Toynbee’s 12-volume A Study of History (1934-1961), which surveys twenty-one world civilizations, reaching as far back as the Babylonian and Roman empires. Toynbee famously said that “civilizations die from suicide, not by murder”, by which he meant that, instead of being destroyed by outside forces, they suffer a kind of “schism of the soul” that results in some form of cultural disintegration. Societies begin to disintegrate, he argued, when people believe that they are no longer bound by the moral law and allow themselves to be led by their impulses at the expense of their creativity. They also yield to a sense of drift, which brings them to believe that they have no control over their lives and that there is no point in resisting emerging forces threatening the world in which they live. Toynbee describes this tendency, which he names promiscuity, as “an act of self-surrender to the melting pot … in Religion and Literature and Language and Art as well as … in Manners and Customs” (emphasis added). In other words, the surest sign of a civilization nearing its end is its uncritical acceptance that, socially and morally speaking, anything goes. (The postmodernist flavor of the foregoing should come as no surprise, Toynbee having been one of the first scholars to use that word.)

Thus Toynbee’s theory of civilizational decline appears to enhance the validity and credibility of Murray’s analysis. But should we then conclude that such is the end of our story? Are we condemned to a life of spiritual and cultural vacuum such as that described in French writer Michel Houellebeck’s best-selling novels? (His latest, titled Submission, portrays a situation where a Muslim party upholding traditional and patriarchal values wins the 2022 presidential election in France with the support of the Socialist Party.) Our liberal secularist intelligentsia certainly appears to think so and, in fact, is actively engaged in the development of such a future. Yet things are unlikely to evolve in that sort of tranquil manner. A civilizational collapse never happens peacefully. When people suffer what Toynbee calls a “schism of the soul”, events become unpredictable. In 1920, Hilaire Belloc put it as follows in Europe and the Faith: “The isolation of the soul releases in a society a furious new accession of force. The break-up of any stable system, in physics as in society, makes actual a prodigious reserve of potential energy. It transforms the power that was keeping things together into a power driving separately each component part: the effect of an explosion.”

Christians who take their faith seriously are likely to feel in tune with Belloc’s vision. What distinguishes them from fashionable secularists is that, without disputing the value of Murray’s analysis, they do not ignore God’s role in history. They are well aware, for example, that the current state of what used to be called Christendom is not unlike that of the Jewish people in the years preceding the Babylonian exile – a time when God’s chosen people had “forsaken the fountain of living water and provoked the Lord to anger by its idolatry… the sacrifice of children, desecration of the Sabbath, and false weights”.  The prophet Jeremiah reminded his brothers in exile that their fate had been determined by God, not by Babylon rulers, the latter being merely instruments of his punishment for their sins, and that they would one day return to the land God had given them. Since Christians view themselves as the new people of God and have largely committed the same type of sins as their Jewish ancestors, they know that, whatever the future has in store for them, they are not doomed to the life of spiritual and cultural vacuum foreseen by liberal secularists. Whatever punishment they might have to incur, they know that there will be a return to the faith. In the words of Hilaire Belloc, “The Faith is Europe, And Europe is the Faith.”

About Richard Bastien 3 Articles
Richard Bastien is Vice-President of Justin Press and the director of the Catholic Civil Rights League for the Ottawa area.

On the temptation and fallacy of “on-going revelation”

From atheism and Marxism to Catholicism: The conversion of Sohrab Ahmari

Sohrab Ahmari, 33, is a New York City journalist and Catholic convert.  He grew up in a nominally Muslim home in Iran under an oppressive Islamic regime and had renounced all religion by his teen […]