What is the next most difficult thing after criticizing Islam? Publishing a book about practicing Muslims who do. Encounter Books, a publisher with a strong record of provocative titles and consistent intellectual quality, brings us The Challenge of Modernizing Islam, a collection of interviews with self-described Muslim moderates and reformers by Christine Douglass-Williams. Douglass-Williams, an accomplished journalist and television producer and a Director of the Canadian Race Relations Foundation, assembled eight well known moderate and reformist Muslims from the U.S. and Canada. The result is a welcome contribution to the intense debate over Islam generally, and Islam in the West specifically. 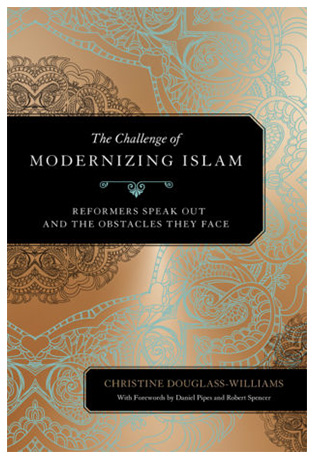 The importance and timeliness of this book cannot be overstated. Other books on reforming Islam exist, the most prominent by Ayaan Hirsi Ali. They are often from an atheist perspective (as in the case of Hirsi Ali), or written by former Muslims, or by non-Muslim Westerners. Still other books concern reform in countries ruled by Islamic law, namely Iran and Saudi Arabia. But outside of these efforts, there is little in the way of books that ask hard questions of practicing Muslims who are both knowledgeable and critical of their faith; Muslims who bear the suspicions of other Muslims and non-Muslims alike. Given that the penalty for apostasy in Islam is death, the brave individuals interviewed here are risking their lives to offer dissenting views in the face of normative Islam. So it is not an exaggeration to consider The Challenge of Modernizing Islam a publishing event.

Douglass-Williams’ book is structured in two parts. Part One includes interviews with such formidable thinkers as Dr. Zuhdi Jasser, Dr. Tawfik Hamid, and Dr. Salim Mansur. Questions involve foundational subjects including the person and place of Muhammad in Islam, the role of Sharia, the problem of the Hadith and Sunnah, and disturbing passages in the Koran. There is also ample discussion of reform, moderate Islam, and Islamism. Douglass-Williams also explores the dangerous practice of certain Islamic organizations (Muslim Brotherhood, Hamas, CAIR) and Western progressives of using Islamophobia accusations to stifle debate and dissent (a nonsensical, but no less troubling, example of which is the Southern Poverty Law Center’s labeling of Dr. Zuhdi Jasser as an “extremist” for claiming to be a moderate Muslim). In Part Two, Douglass-Williams augments the interviews with her own research and analysis to offer perspective and depth. The book includes strong Forewords by Dr. Daniel Pipes and Robert Spencer, a handy glossary, and a timeline history of Islam.

Douglass-Williams’ stated objective is “Understanding the difference between Muslims who practice their faith personally, from Islamists who thrive toward a political Islam and to impose their ideologies globally, is the fundamental goal of this endeavor.” This is a tall order. For starters, it is not a given that Islamism is any different from Islam. Robert Spencer has written elsewhere that “Islam/Islamism distinction is an artificial one imposed by the West, with no grounding in Islamic history, theology, or law.” The term “Islamist” Spencer argues, incorrectly suggests “that Islam itself, in its authentic form, has no requisite political aspect, and no incompatibility with Western values or democratic government.” Spencer is joined in this view by former Muslim Dr. Wafa Sultan. Andrew McCarthy, on the other hand, argues that “we have to separate Islamists from Islam.” The reason, he claims, is that how the question is answered “critically affects how we respond to the profound threat posed by supremacist Muslims” and so, he says, “we must answer it correctly.” Douglass-Williams follows McCarthy’s thinking, adding that a failure to distinguish “between Islam and Islamism is an advantage to stealth Islamists of the Muslim Brotherhood, as it abets their efforts to conceal and disguise their identity and ambitions.”

Another debate emerges in response to Douglass-Williams’ questions regarding moderate and reformist Muslims. Not all moderates claim to be reformers, though all reformers claim moderate views and practices (setting aside the more involved discussion of crypto-moderates and Wahhabi reformers). Dr. Tawfik Hamid says that reformers provide the theoretical and theological justification for the interpretation of Islamic texts, while moderates demonstrate it in practice, acting as a model to other Muslims. “It’s a symbiotic relationship.”

Hamid also argues that the “impulse to violence” in Muslims can be traced to “mainstream sources of Islamic law” that hold “that anyone who insults the prophet Muhammad must be killed without even giving them a chance to repent.” But if this is the case, then the possibility of moderate Islam is called into question. For if the mainstream sources of Islamic law call for the death of one who insults Muhammad, then the Charlie Hebdo killers were not extremists after all, but rather pious Muslims following the dictates of their faith. If, on the other hand, we view moderate Muslims as those who reject mainstream sources of Islamic law and practice a strictly spiritual and personal (as opposed to political) form of the faith, the nature of Islam and what it means to be a Muslim becomes the central question. Therefore, a moderate/extreme dichotomy is not a useful construct to analyze the problem of Islam.

Reformers must also grapple with the very foundation of the faith. William Kilpatrick, author of Christianity, Islam, and Atheism: The Struggle for the Soul of the West, points out that “Muslim reformers are left with the problem of what to say about the main hero of Islam—Muhammad. He was the first jihadist—a warlord who ordered torture and mass beheadings, sold women and children into slavery, and pronounced sex slaves to be the rightful property of the victors. Islam minus Muhammad would be a kinder, gentler religion. But can you have an Islam without Muhammad?”

One respondent offers something of an answer. Sheikh Dr. Ahmed Subhy Mansour, founder of the Koranic Movement, tells Douglass-Williams that the Koran is entirely sufficient and the Hadiths unreliable. He argues that the United Nations Declaration of Human Rights should replace Islamic law as the core of Islam. Dr. Tawfik Hamid also sees Sharia as the stumbling block to reform. But even if Sharia is discarded, it would still be necessary to render the Koran in a manner that emphasized the more peaceful Meccan passages over the violent Medinan verses. And given it is an article of Islamic faith that the Koran is the immutable, inerrant, and co-eternal word of Allah, it seems unlikely, not to say exceedingly dangerous, to propose such a solution. One respondent, Shireen Qudosi, does precisely that.

Qudosi says “You must challenge the Koran. You have to. If you don’t challenge that, you can’t challenge the faith, which is the biggest problem we have.” Qudosi, a freelance writer and Muslim reformer, also takes the problem of Muhammad head-on. She bravely doubts Muhammad is a model for Muslims today. “He’s just the messenger and died like everyone else, and I think we turn him into a demigod. We idolize him and that is what we see in the Hadiths.” According to Qudosi, Muhammad was only God’s messenger and “the Koran says don’t follow the prophet but follow God.”

The answers of Qudosi and her fellow respondents are evidence of Douglass-Williams’ asking the hard questions. She asks her respondents about Muhammad’s child bride, Aisha. She elicits some very telling and courageous views on the place of women in Islam and on the danger of jihad. And, most significantly, Douglass-Williams explores the renewal of ijtihad, which she defines as an “Islamic legal term for independent reasoning in finding a solution to a legal question.” She observes correctly that “The gates of ijtihad were closed by Sunni jurists in the tenth century” (for an excellent study on the end of ijtihad, see Robert R. Reilly, The Closing of the Muslim Mind: How Intellectual Suicide Created the Modern Islamist Crisis). One truly appreciates the consequences of Islamic intellectual suffocation by looking at the freshness of Catholic engagement with science, medicine, law, and other areas. Pope St. John Paul II singled out the complimentary relationship between faith and reason for his famous encyclical, Fides et Ratio. He observed elsewhere that “Faith without reason withers into myth or superstition. Deprived of reason, faith is left only with feelings and experience. It loses its universality.” For the book’s discussion of these questions alone, it is well worth reading.

Nevertheless, the book is not without flaws. On the methodological side, Douglass-Williams misses numerous opportunities for follow-up questions that would have added to the overall value of the book or offered some clarification. It is not surprising that the respondents contradicted each other and, at times, themselves. But it would be a much stronger book had the author challenged her interviewees on their contradictions or the concomitant responses of other respondents.  The issues are indeed complex and the space minimal, but it felt as if the questions were submitted on paper or via email and lacked the dynamism that comes with live interviews.

Substantively, Douglass-Williams argues for a modernization of Islam that entails a reformation allowing adherents to pick and choose what they wish from their faith; that relativity in practice and belief, coupled with the acceptance of religious pluralism, would correspond to Western freedoms and rights as enshrined in our constitutions. It would put an an end to the barbarism and violence to which we’ve grown accustomed. But to rely on the United Nations Declaration of Human Rights as either the basis for a new Islamic law, or as a moderating influence on existing Islamic jurisprudence, is to put a secular bandage on a religious problem. Neither is the vague notion of modernity an antidote. Guarantees of political rights and modern freedoms under the auspices of the UN or any Western government are not equipped to meet the singular threat of a supremacist theology and totalitarian political ideology like normative Islam. The challenge is not for Islam to modernize. It is for all of us, Muslims and non-Muslims alike, to understand what Islam is, not what we would have it be.

The Challenge of Modernizing Islam: Reformers Speak Out And The Obstacles They Face
by Christine Douglass-Williams
Encounter Books, July 2017
Hardcover, 296 pages

To Rome through Mecca

It has long been the practice for Christians and Muslims to look at what they have in common. David Pinault suggests that a better way […]