In 2009, Detective Jim Wood was working as part of a task force fighting Philadelphia’s illegal prescription drug trade. Known to friends as ‘Woody’, Jim Wood was a committed Catholic, a devoted husband and father, and a doggedly determined cop respected by colleagues and friends alike. However, no amount of professional experience prepared him and his team for the horrors awaiting them when, on February 18, 2010, they conducted a raid on an abortion facility run by Dr. Kermit Gosnell. The dark, maze-like building stank of human urine and cat excrement; there was blood and filth everywhere and, as the horrified team were soon to discover, the remains of hundreds of aborted babies dumped in the basement. A calm Gosnell sat down for his police interview, still wearing his blood-soaked surgical gloves, and proceeded to eat a plate of salmon teriyaki in front of them. Jim Wood did not know at that moment that he was facing America’s most prolific and cold-blooded serial killer. 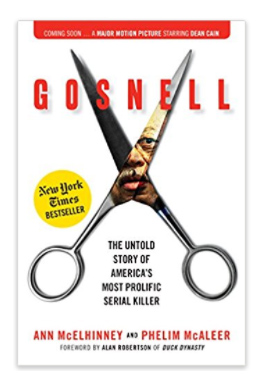 The story of abortionist Gosnell’s crimes against women and babies should have made international headlines. Over a period of decades, under the noses of the very agencies whose job it was the regulate abortion facilities, Gosnell ran a filthy and dangerous abortion mill in which at least three women lost their lives, others were maimed, abused and coerced into abortions against their will, and countless babies who were born alive were murdered by Gosnell and his associates by having their necks snipped with scissors. His crimes were so barbaric that his name ought to be as infamous as Jack the Ripper. But the most chilling detail of what is arguably the most devastating case of medical mass murder in American history is that the world has chosen for the most part to pretend it never happened. There is a simple reason for this: Gosnell was an abortionist. He belonged to a protected clique within the medical establishment which allowed him to carry out his criminal behavior over a period of many years, and which continues to protect him from the shame and opprobrium he deserves.

Gosnell is a thorough retelling of the investigation into Kermit Gosnell’s activities, the media response, and the individuals involved—from the unqualified staff he employed to the poverty-stricken immigrant he killed just months after her arrival in the United States to begin a new life after years of suffering and loss. Readers should be warned this is an extremely disturbing book to read. I can honestly say that in fourteen years as a researcher in this field, I have never had to sift through more disgusting or distressing information than I found in this meticulous account of Gosnell’s crimes; I felt physically sick trying to process the enormity of what this man had done and am not sure I will ever forget details—such as the investigator who was forced to slice open the heads of the dead babies to see if their brains were still intact or the horrific suggestion that dead babies’ bodies were dumped in a lake where crabs could eat away at the evidence. The book is also very candid about the nature of abortion itself and though this is necessary in a society which persistently shies away from the truth about abortion, it may prove too much for anyone struggling to come to terms with a past abortion.

The blood-curdling descriptions of newborn babies being stabbed to death by a jovial doctor are overwhelming, as are the accounts of unsuspecting women being injected with powerful drugs by unqualified staff or left lying on filthy blankets, bleeding and confused. However, almost more repugnant is the book’s exposure of the lengthy cover-up by the Department of Health and the National Abortion Federation, whose job it supposedly was to protect women, but who instead allowed their ideological commitment to abortion to leave a monster like Gosnell to prey on women for decades. As Alan Robertson angrily writes in his Foreword: “Why were the bodies of babies mutilated and displayed for decades in this barbaric clinic serenely named the Women’s Medical Society? Because the abortion industry is a powerful and greedy force in this country and the peer pressure coming from the pro-choice movement does everything possible to ignore the abuses of women and children.” The catalogue of failures and missed opportunities to stop Gosnell is so long that the words ‘the city health department did nothing’ could almost be a refrain echoing through the narrative.

The character of Gosnell himself is examined in detail; the authors describe the unsettling experience of visiting him in prison and being forced to listen to him rambling for hours about his accomplishments, his innocence, and his superiority in all things. The analysis of his psychology offers an alarming insight into the mind of a serial killer: the narcissism, the martyr mentality, the obsession with control (particularly controlling women’s bodies through the abortion procedure), the tendency to manipulate people’s weaknesses for his own gain. Most readers will be aware that criminals do not walk around the streets sporting horns and a trident, but it is always unnerving to consider that the most wicked murderers in history, Gosnell among them; have often been charming, cultured, intelligent, and mild-mannered—the sort of man you might instinctively trust.

There were many guilty parties in the Gosnell story, whose incompetence and ideological obsession with abortion allowed them to turn a blind eye or openly collude with Gosnell’s thirty-year killing spree. But the media’s determination to ignore the trial and conviction of America’s baby butcher is perhaps the most inexcusable. When I think of how quick columnists are to start shrieking righteously over other crimes, it is impossible not to ask the question: is the killing of women and children only worthy of a mention if it is politically useful? For that matter, would Gosnell’s house of horrors have been worthy of a few headlines if he had worked in a country where abortion is illegal rather than in the land of ‘safe, legal abortion’? Would it have been necessary to crowdfund the film exposing Gosnell if he had been a more socio-politically convenient kind of villain?

In light of the media’s desperation to keep the spotlight well away from Gosnell (and more importantly, the trade he peddled) this book could not be more important. The authors are to be commended for the unflinchingly detailed work they have produced, no doubt at great personal cost. I challenge every adult who cares about human rights to read this book. In particular, I challenge anyone involved with abortion to abandon their safe spaces and comfort zones and read it. Read all of it. Kermit Gosnell meant the innocent lives he ended to be forgotten, but this book denies him that victory.

About Fiorella Nash 37 Articles
Fiorella Nash is a researcher and writer for the London-based Society for the Protection of Unborn Children and has over ten years' experience researching life issues from a feminist perspective. She makes regular appearances at both national and international conferences and has appeared on radio and in print discussing issues such as abortion, gendercide, maternal health and commercial surrogacy. She is the author of The Abolition of Woman: How Radical Feminism Is Betraying Women (Ignatius Press, 2018), and is also an award-winning novelist, having published numerous books and short stories under the nom-de-plume Fiorella De Maria.

Why a prohibition on sex discrimination could actually promote abortion

Washington D.C., Jan 22, 2021 / 10:05 am (CNA).- Members of Congress are looking to resurrect a constitutional amendment banning sex discrimination—one that Catholic groups have warned could promote abortion and transgender ideology.

Sisters Vanessa Pagano (left) and Nichole Pagano, who are both students at Hunterdon Central Regional High School and attended an unsanctioned pro-abortion rally at the school in order to stand up for the unborn with a pro-life sign. / Vanessa P… […]