In his recent book published by Ignatius Press, The Cardinal Müller Report (2017), Gerhard Cardinal Müller, until a few days ago the Prefect of the Congregation for the Doctrine of the Faith, offers many insights on the state of the Church and a corresponding set of theological, doctrinal, moral, and philosophical questions. One of his insights is expressed in response to a question regarding the relationship between doctrine and personal encounter with Jesus Christ. This is a particularly important question since we often hear nowadays that the Gospel is about a person and an event—not doctrine. The interviewer, Fr. Carlos Granados, asks: “Is there such a thing as a doctrine that does not relate to a personal encounter, to a life? And, on the other hand, is there such a thing as a personal encounter or a life that does not involve or encompass doctrine? Is it conceivable in Christianity that there should be a scheme that begins with the personal encounter and then, as a further, secondary matter, ends with doctrine?” 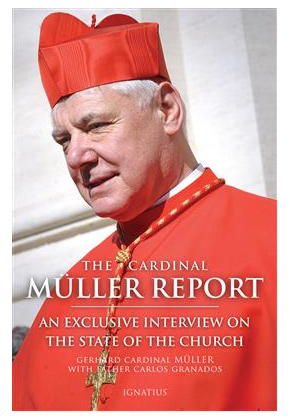 Cardinal Müller quickly responds by rejecting the implied dichotomy here between personal encounter and doctrine. On the one hand, he agrees that we must give “priority to the person over ideas.” “But,” on the other hand, “when speaking of God, one must be careful not to let this prioritization drain doctrine of all its value.” In other words, from an epistemic viewpoint, both views are wrong: doctrine without personal encounter, and vice versa: personal encounter without doctrine. Rather, as I understand Cardinal Müller, they exist in a mutual correlation in which neither can exist without the other; neither is basic to the other because neither is the source of the other. “An encounter with God involves doctrine in an inseparable way.” He explains:

God is truth, and the events in the story of salvation are a realization, under the conditions of concrete human history, of that truth which is God. . . . The God who forgives our sins, for example, is also the God whom we recognize in doctrine, in the confession of faith. We therefore cannot separate our faith in God as a person from the substance of the faith. God as a person, as truth, and as the substance of the confession of faith is absolutely one and the same.

And in a point especially significant because we also often hear nowadays that encountering Christ is an event, again a person, not about morality. Cardinal Müller rightly rejects this formulation. He says, “Nor can the truth of the faith be distinguished from the truth of morality relating to life, because God is at the same time both truth and goodness. The good God is the true God is the God of love: God is love (1 Jn 4:8).”

In short, then, the act of faith is a personal encounter with Jesus Christ, and this encounter is, says Cardinal Müller, “not empty and content-free.”  He adds, “In fact, the content of faith is already present in the encounter and makes it possible, so that it does not appear afterward.” If we are, then, to understand the nature of the Christian faith, we need to do so in light of the teaching of the Apostle Paul, who calls us to believe with one’s heart, and to confess what one believes (Rom 10: 9).

The then-Lutheran theologian Jaroslav Pelikan informs us of a twofold Christian imperative—the creedal and confessional imperative—that is at the root of creeds and confessions of faith. Faith involves both the fides qua creditur—the faith with which one believes—and the fides quae creditur—the faith which one believes. Maximally, a biblical account of faith, according to Reformed theologian Richard Muller, involves knowledge (notitia), assent (assensus), and trust (fiducia). Indeed, normatively these are three elements of a single act of faith involving the whole person who commits himself to God in Christ, and through the power of the Holy Spirit. Minimally, however, faith involves belief, and to have a belief means that one is intellectually committed to the whole truth that God has revealed.

Furthermore, faith involves holding certain beliefs to be true, explains Thomas Aquinas, because “belief is called assent, and it can only be about a proposition, in which truth or falsity is found.” Paul Helm puts it this way: “the personal and the propositional, are interconnected, and highlight two aspects of one situation.” Moreover, the fides quae creditur is the objective content of truth that has been unpacked and developed in the creeds and confessions of the Church, dogmas, doctrinal definitions, and canons. That is, as Cardinal Müller rightly sees, “Certainly, after the encounter I can have a better understanding or a more complete synthesis, I can reflect more deeply on what has happened to me, but doctrine and confession of faith, in themselves, are not that later reflection; instead they are the actual content of the encounter.”

Consider, finally, the idea of objective truth as something that happens to us; in other words, as hermeneutics philosopher, Jens Zimmermann, puts it, “truth is an event.” This claim regarding the “truth of event” raises the question of whether events are true. As Paul Helm, for one, asks, “They happen, but are they true?” “Clearly not,” he responds. Helm is right. When we ask about the matter of truth, for instance, the truth of what St. Paul asserted when he said that “God was in Christ reconciling the world to himself” (2 Cor 5:19), we are not considering “the fact that Paul uttered p, that uttering p is a linguistic act . . . or facts about the fact of his asserting it.” Rather, we are considering the truth content of that assertion p, and if that assertion is true, it is then permanent truth in the realist sense such that that proposition is true because it corresponds to reality.

In sum, as the Catechism of the Catholic Church teaches, “Faith is first of all a personal adherence of man to God. At the same time, and inseparably, it is a free assent to the whole truth that God has revealed” (no. 150). These two aspects of faith are inextricably interconnected and separating them dichotomously does an injustice to the nature of faith. This is just one of the many insights Gerhard Cardinal Müller offers in his recent book, The Cardinal Müller Report. Let me conclude with a word from him:

Redemption is conditioned on orthodoxy, as is the correct conception of eternal life: orthodoxy is not just a theory about God, but a matter of God’s personal relationship with me. For that reason, heresy always affects that personal relationship, because it separates God who is truth from the revelation of that same truth. For example, it would make no sense to say: “I believe in God, but I do not believe in God the Creator, because this attribute is a point of faith that was added after my personal encounter with God.” Nor can I say, “I love Jesus, but I do not believe in the truth of the fact that Jesus is the Savior of all men, because that is something that has nothing to do with him as a person and was added later in theological thought.” The same thing happens when it comes to morality. I cannot say, “Lord, Lord,” and not fulfill his will (see Mt 7:21). The Lord as a person is inseparable from the Lord as goodness. Orthodoxy is precisely participation in the act by which God knows himself in the Word and loves himself through the Spirit. In that way, orthodoxy and the upright and virtuous life are both the same participation in the intra-triune relations characteristic of divine life.

I, for one, am thankful for this insight of Cardinal Müller, the former prefect of the Congregation for the Doctrine of the Faith.

The costs of following a “nice” God

A new book shows the differences between the God of Christianity and the god of “nice,” who wants us to always feel good about ourselves, […]

A Response to Archbishop Viganò’s Letter about Vatican II

I very much appreciate Archbishop Viganò taking the time to respond to my article that appeared in Inside the Vatican on July 27, 2020. However, I found his response, posted on August 10th at Inside […]

The question at hand is: what do we make of America’s schizophrenic natural law pedigree, rejecting but needing Catholic ideas? (And John Locke, history’s most […]