G.K. Chesterton was a monumental figure in the Catholic Church of the twentieth century whose continuing influence is as robust as his famous girth. This year commemorates a century since his conversion (on July 30, 1922) to the Catholic Church, and many of his books are not only still in print, but flying off the shelves. Collections of his writings are just as popular, as there are few topics Chesterton did not write at least something about, and many on which he wrote so comprehensively that such a collection can systematically treat the topic. 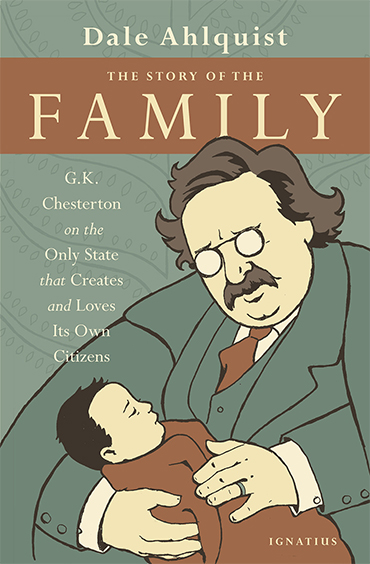 Most recently, he edited The Story of the Family: G.K. Chesterton on the Only State that Creates and Loves Its Own Citizens, which is available for pre-order from Ignatius Press and will available on March 26th.

The Story of the Family collects many of Chesterton’s writings on that most important nucleus of society, the seed from which all of society grows. The typical Chesterton wit animates each of these essays, as does his knack for common sense—a knack that often demonstrates that “common sense” is not so common after all.

Ahlquist recently corresponded with Catholic World Report about this most recent Chesterton collection.

Catholic World Report: How did this book come about?

Dale Ahlquist: Well, the book wasn’t actually my idea! Some good folks from Ignatius Press came to me because they wanted to see this kind of a book, and they figured I was the guy to do it. I have a pretty good command of the mountain of writings that have come from the pen of G.K. Chesterton.

CWR: Why a book on the family? Why would Chesterton have so much to say about the family when he did not have children?

Ahlquist: Chesterton had something to say about everything, but especially about important things. And the family is an important thing. It is the basic unit of civilization, and if it falls apart, then the whole society starts to crumble.

And this is exactly what we’re seeing. Chesterton saw it coming. It was the tragedy of his own life that he and his wife Frances could not have children, but they surrounded themselves with children nonetheless.

Ahlquist: He was fearless. And he enjoyed being known as a controversialist. He said no good ever comes from a one-sided controversy. He was prophetic about all of today’s controversies – which remain unsettled even if they have been officially approved.

We can continue to use Chesterton’s arguments 100 years after he made them. He foretold the devastation to children as a result of public education, working mothers, the bland acceptance of divorce and sexual perversion, and the callous disregard for life in the womb.

CWR: Chesterton converted to Catholicism in 1922; many of the excerpts in the book come from before his conversion. Is there a difference between his pre- and post-conversion writings, specifically when it comes to the family? Did his views change at all after his conversion?

Ahlquist: One of the most fascinating things about Chesterton is that you cannot tell the difference between his pre-conversion writing and his post-conversion writing. His consistency over the course of a 36-year career is astonishing.

Becoming Catholic was not so much a turning point as a completion of his decision to become a Christian at the beginning of the 20thcentury. There are, however, more occasions of specifically Catholic writing where he takes on some Protestant objections to the Catholic Church.

CWR: How did you go about selecting the excerpts contained in this volume? Was this any different from some of the Chesterton collections you’ve edited previously?

Ahlquist: I laid it out in six sections, each covering a particular ideal and what lines up as its opposition. Thus, you have The Family – and the World; Love – and Lust; Marriage – and Divorce; Babies – and Birth Control; Parents – and Public Education; Home – and Work.

I mix a combination of poetry and essays (or excerpts from essays), but also lots of those wonderful, witty Chesterton quotations.

I suppose it’s similar to a book I did on Chesterton’s writings about Shakespeare, called The Soul of Wit.

CWR: As a quick side note: what do you make of the efforts to move forward with Chesterton’s cause for canonization, and the Bishop of Northampton’s decision not to advance the cause?

Ahlquist: We’re definitely moving forward. What the news reports seemed to miss was that that Bishop Peter Doyle of Northampton made it clear that he did not want to interfere with the Cause, he just said he would not be the one to open it. He admitted he did not know much about Chesterton.

He is now retired, and we have already been in contact with other bishops, who are not only familiar with Chesterton but like him.

CWR: What do you hope readers will take away from the book?

Ahlquist: The issue is timely, and Chesterton continues to be timely. I hope readers will be convinced by his defense of the family.

CWR: Is there anything else you’d like to add?

Among the fault lines revealed by the ecclesiastical earthquakes erupting after Pope Francis’ Amoris laetitia, we can see, I suggest, how some high-ranking ecclesiastics seem inadequately to understand the differences between “sexual relations” and “conjugal relations”. Most any […]

How a Catholic family of 16 lives debt-free

Washington D.C., Apr 15, 2021 / 18:30 pm America/Denver (CNA). Five years ago, a Catholic family of 16 made international news for sending their children to college without any debt – and now the parents […]