Although it does allude to many different episodes of the abuse meted out to Christians by their Muslim neighbors, especially in Pakistan, The Persecuted: True Stories of Courageous Christians Living Their Faith in Muslim Lands is not so much an analysis of the deplorable situation in Central Asia as it is an account of the author’s personal experience with refugees from the region. In particular, Casey Chalk relates the trials of Michael, a Goan-born Catholic refugee whom the author met in Thailand. Formerly a resident of Pakistan, Michael had there fallen under the unfriendly scrutiny of the Tehrik-e-Taliban, which practices a door-to-door evangelization reminiscent of the Jehovah’s Witnesses – albeit with guns and threats of violence toward the recalcitrant unbeliever. 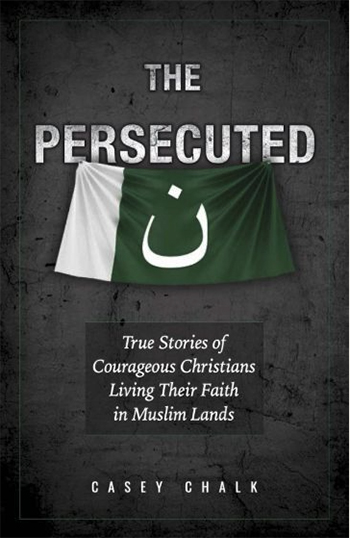 Having stated to one such Islamic conversion team “I don’t know about Islam, I know about Jesus,” Michael found himself a target of psychotic bullying. He was repeatedly beaten, two of his sisters-in-law were kidnapped, and eventually a wanted poster with his face on it came to be posted at the local mosques. What ensued was Michael’s struggle to get his family out of Pakistan and into a less hostile land. Elsewhere, Chalk recounts a fatwa issued against his friend Wilson William and William’s family, for having allegedly disrespected the Quran, for which crime “this whole family has done a sin against Islam, so this family is eligible to die, and anyone who finds this pagan family and kills them will go directly to heaven.”

These harrowing stories take place against a general backdrop of persecution in Pakistan, where a Muslim majority maintains a heavy-handed – sometimes brutal – domination over Christian and Hindu minorities. Some of the more extreme cases have even caught the fleeting attention of Western news junkies, as in 2011, when one of the country’s regional governors had been assassinated for opposing Islamic anti-blasphemy laws. In 2016, a group of Pakistani Christians observing Easter Sunday in a city park fell victim to a Muslim suicide bomber who slew over 70 people. Aside from such headline-grabbing incidents, there have been many instances of Christians being subjected to abuse and intimidation in the countryside, as well as of Christian women being forced into marriage with Muslim men.

Chalk’s narrative might well be situated within a global context, as US foreign policy not only played a role in stoking tensions between Muslims and Christians, but even of creating refugee crises in the first place. “We remain a nation with one of the most vocal Christian political communities in the West—still one third of America’s citizens deem her a Christian nation,” Chalk observes in a 2019 American Conservative article footnoted in his book:

One would think we would steer clear of conflicts that disproportionately harm Christians of other lands, especially where they are already vulnerable minorities. Yet we still invaded Iraq in 2003, and it’s proven disastrous for the ancient, venerable Christian community there. Before the invasion, approximately 1.4 million Christians lived in Iraq. Today, there are fewer than 250,000, an 80 percent drop [. . . ] Power vacuums, it would seem, cause distress for minority groups. The Islamic State—whose creation can be traced back to instability set off by the [Iraq] invasion—have persecuted, abused, and murdered plenty of Christians in neighboring Syria. The Christian population of Syria, similar to that of Iraq, dropped from 1.7 million in 2011 to below 450,000 today. ISIS’s influence is still felt there.

Just as was the case regarding regime change in Iraq, neoconservative Catholics were among some of the most vocal advocates for helping rebels overthrow the Syrian government. For many American Christians, the likelihood that Islamic militants might exploit the chaos of a collapsed system and persecute Christians proved less compelling than the possibility of spreading the democratic ideals of liberty, equality, and fraternity. By contrast, those Christians who actually have to live in the Middle East could be forgiven for finding US policy mystifying. Why target the Ba’athist governments, which were key sources of political stability in jihadist-infested territory, while simultaneously making allies of anti-Christian nations like Pakistan?

As recently as 2020, Chalk notes, Pakistan’s High Court ruled that a Christian girl abducted by a Muslim could not be recovered by her family, and “was required to be a ‘good wife’ to the man.” If such are America’s allies, what does that say about the American regime’s human rights rhetoric?

Chalk is necessarily more nuanced when addressing the issue of privilege versus poverty, since “according to Aquinas, there is nothing intrinsically wrong with some people having more money than others and enjoying the benefits of that wealth.” At the same time,

In a world defined by grave inequities, where many eat and clothe themselves sumptuously while others lack access to potable water, such polarities cannot be easily understood, nor do I think Christ would intend them to be. Indeed, St Thomas Aquinas states that “the natural division and appropriation of things” does not “preclude the fact that man’s needs have to be remedied by means of these very things”; that “whatever certain people have in superabundance is due, by natural law, to the purpose of succoring the poor.”

In short, Chalk suggests we Americans re-familiarize ourselves with noblesse oblige – the notion of property as responsibility.

While he does not make too much of it, Chalk does relate how he himself tried to assist Pakistani refugees in the financial, administrative, and spiritual spheres. Although he clearly believes that people should do more on an individual or parish level to help refugees, his perspective is marked by common sense. Indeed, by changing the world “religious” to “political,” some of his comments on the Pakistan / Thai border crisis could be made to apply to the United States:

How many of those coming across the border do so simply for ‘a better way of life,’ which is to say access to public services and higher standard of living which the modern welfare state insists is an inalienable human right? Were the system set up to restrict economic migration, it would certainly be easier to deal with the (relatively) small number of genuine victims of religious persecution.

Chalk’s perspective is a rare one indeed, and one which warrants more attention. Where sentimental talk about “the marginalized” all too often boils down to “I support the current thing,” Chalk’s extended involvement with real cases of hardship testifies to a genuine commitment. This commitment is informed by prudence, as well as by a realization that the well-off have an obligation to their own countrymen, too.

Humanitarian empire and the pornography of compassion

It should come as no surprise that there is anxiety or even outrage among those who identify with the counter-globalist movement which put Donald Trump into office.  Whatever one thinks of either President Trump or […]

As another attack ends an uneasy calm in northern Mozambique, a growing Islamist insurgency in the region has continued to worry Catholic bishops in the southern African country. On November 14, the insurgents attacked Nagulue’, […]

The geopolitics of Pope Francis’ trip to Kazakhstan

Rome Newsroom, Sep 12, 2022 / 12:00 pm (CNA).
This week Pope Francis is traveling to Kazakhstan, a Muslim-majority country sandwiched between Russia and China.The pope has said that he sees the trip to the former So… […]