It is all here: The understanding of the radical eruption of God in the world through the Incarnation. The necessity of faith to purify reason and that we have a reasoned faith. The recognition of the crisis of modernity that requires a rethinking of things down to their roots. The understanding of Christianity as a love affair rather than a moralism. The superabundance of God’s love. The concrete nature of the faith. And all in just under 100 pages. 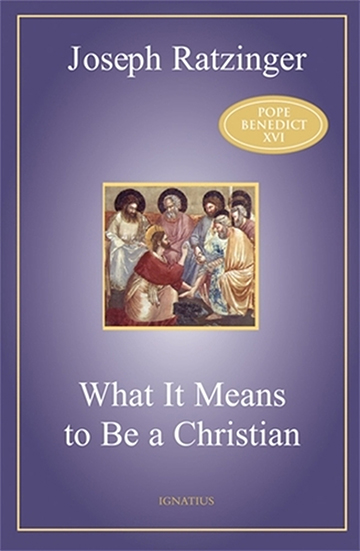 What It Means to Be a Christian, a slender compilation of three Advent sermons then-Father Joseph Ratzinger gave in the Münster Cathedral in 1964, is one of the two books I’ve given away the most in my life. (The other is Fr. Alexander Schmemann’s For the Life of the World.) I reread it every few years. It never ceases to delight and challenge. In these times of crisis in the world and in the Church, What It Means to Be a Christian offers a fresh and timeless articulation of the Christian vision.

Indeed, even though Ratzinger preached these sermons nearly 60 years ago, their originality makes one think that they could have been preached this past Advent. One also sees that Ratzinger never was the stereotypical academic immersed in abstractions that seem to have little or no bearing on real life. Rather, one encounters the theologian-pastor who understands that theological speculation and study are always rooted in (and required to be aimed toward) the concrete of everyday life.

An impetus for the publication of the sermons was that “[o]ur age, with its scientific abstractions . . . sometimes seem[s] to forget about living people.” This is a mistake into which Ratzinger has never fallen. So, for instance, he reminds his readers that “Advent”—and Christianity more generally—“is not just a matter of remembrance and playing at what is past.” Advent “is our present, our reality: the Church is . . . referring us to something that also represents the reality of our Christian life.” Thus, Ratzinger urges us to bring “the whole burden of our life,” to the Lord.

As throughout his often misunderstood papacy, Ratzinger’s overriding theme in these 86 pages is that God is love. God is superabundant love. Indeed, superabundance is God’s love language. The “idea of ‘superabundance’ is characteristic of the whole story of God’s dealings with man, indeed that it is, moreover, as it were, the characteristic trait of divinity in creation itself.” God’s “way of doing things . . . lavishly produces an entire universe in order to prepare a place on earth for that mysterious being, man.”

In God’s superfluous creation and his ultimate incarnation, death on the cross, and resurrection, we are brought face-to-face with a love that “will always defy the calculating minds of correct thinkers.” As Ratzinger writes, Christ’s death on a cross “can really be understood only on the basis of the foolishness of a love that discards any notion of calculation and is unafraid of any lavishness.”

Only here in the conviction and reality that God is love do we see how Ratzinger can consistently push back against the notion that Christianity is primarily a moral code while at the same time concluding that Christianity demands heroism. Ratzinger rejects Christianity as moralism. But he does not reject morality. Indeed, he places it on a surer footing. True faith is not moralism. Rather, it is a participation in the very interior love of God. As Ratzinger would state years later, “Christianity is not an intellectual system, a packet of dogmas, a moralism,” but, rather, “Christianity is . . . an encounter, a love story; it is an event.” This means, as Benedict would write, that being “Christian is not the result of an ethical choice or a lofty idea, but the encounter with an event, a person, which gives life a new horizon and a decisive direction.”

In Münster in late-1964, Ratzinger was sounding the same theme: “What actually is the Christian reality, the real substance of Christianity that goes beyond mere moralism? What is the special thing in Christianity that not only justifies but compels us to be and live as Christians?” It is love. Love is the rocket fuel that propels us to lavish deeds. As Ratzinger writes, “for anyone who really believes, it is clear that he will not use the certainty of divine forgiveness as license for complete lack of restraint, just as a lover does not make use of the fact that the other person’s love is inextinguishable but feels called upon by that very fact to do his best, for his own part, to become worthy of such love.” The Christian’s call is to echo the superabundance of God in his life. We must “try to adopt the attitude of the lover, who does not calculate but simply—loves.” Morality, then, is the consequence of love.

Yet, Ratzinger also recognizes each man’s complicity and brokenness—the sinfulness that requires the superabundant mercy of Christ, again and again. Echoing Solzhenitsyn’s great line, he writes:

The first thing we have to accept is, ever and again, [the] reality of an enduring Advent. If we do that, we shall begin to realize that the borderline ‘before Christ’ and ‘after Christ’ does not run through historical time, in an outward sense, and cannot be drawn on any map; it runs through our own hearts.

Also striking is Ratzinger’s willingness to address the very real doubts and questions of modern man. While I have never heard that Ratzinger suffered any great dark night of the soul, here, just as in Introduction of Christianity, one gets the sense of someone who knows doubt from the inside—or, at the very least, someone who is deeply sympathetic to the doubts of contemporary men. He writes of the way “in which questions oppress us today” and how we “no longer” are “able to paint things black and white, dividing up both history and maps into zones of salvation and iniquity.”

And, the doubts and questions that humanity rightly asked (and continues to rightly ask) in the wake of two world wars and the boredom and banality of modern life are in Ratzinger’s mind an occasion and opportunity to embrace the answer of God. “The decisive point remains this: men are unable, of themselves, to give any meaning to their individual and collective stories. If they were left to their own devices, human history would run out into nothing, into nihilism, into meaningless.” The “poets of our time, who feel and live in that solitude of man left to himself,” are grasping something profound. And, the bourgeois Christianity to which they were exposed is not the answer—indeed it is part the cause of their doubts and despair.

Becoming a Christian . . . is something quite simple and yet completely revolutionary. It is just this: achieving the Copernican revolution and no longer seeing ourselves as the center of the universe, around which everyone else must turn, because instead of that we have begun to accept quite seriously that we are one of many among God’s creatures, all of which turn around God as their center.

Finally, another theme on which Ratzinger touches is one central to his later work and his papacy: a faith that purifies reason and an open faith that is not afraid of addressing reality head-on. One hears echoes of his Regensburg Address near the beginning of this book when he writes of our fear that “our faith” cannot “stand the full, glaring light of the facts.” He continues:

But a faith that will not account for half of the facts or even more is actually, in essence, a kind of refusal of faith, or, at least, a very profound form of skepticism that fears faith will not be big enough to cope with reality. It dares not accept the fact that faith is the power that overcomes the world. In contrast to that, true believing means looking the whole of reality in the face, unafraid and with an open heart, even if it goes against the picture of faith that, for whatever reason, we make for ourselves.

That has been a watchword for Ratzinger’s life and his papacy. It is also a fitting theme for all Christians to hear anew. In a Church too often characterized by a certain nominalism and in a political life that seesaws between extremes unwilling to deal with reality and facts, we would do well to heed Ratzinger’s warning from six decades ago. Faithful reason and reasoned faith are the opposite of blind piety and cynical, parasitic reason. The faith is intelligible. The world is intelligible. We can be open to all reality without fear of eclipsing reason or losing faith.

What It Means to Be a Christian is a book for all to pick up and hear of the Christian story anew. I cannot recommend it more highly. Reading—or rereading—its pages is to be in the presence of a spiritual master and father of great love. This short and powerful book is worth your time and energy.

What It Means to Be a Christian
By Joseph Ratzinger
Ignatius Press, 2006
Paperback, 96 pages

About Conor Dugan 15 Articles
Conor B. Dugan is a husband, father of four, and attorney who lives in Grand Rapids, Michigan.
Xing