In November 2021, Pope Francis honored reporters Phillip Puellella and Valentina Alazraki, further addressing the importance of journalism and its potential pitfalls. “The risk, as you well know,” said the Pontiff, “is to be overwhelmed by the news instead of being able to make sense of it.” 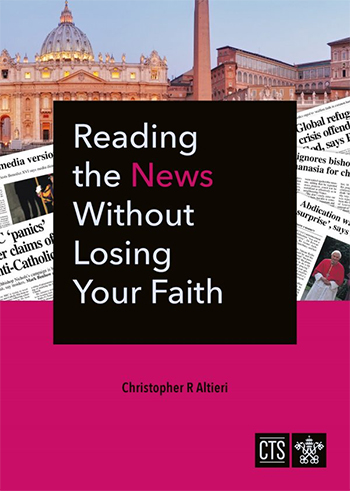 Those words speak of a stark reality staring the general public in the face and which is so common that we often hardly think of it. We stand aghast and agog at countless scandals, disputes, and power grabs. It’s the result of an overabundance of noise in our society, to which the mass media contribute significantly. The biased presentation of events and the very subject matter that tends to get coverage in the news make for an unsettling sensory landscape.

In his new book, titled Reading the News without Losing Your Faith, Christopher R. Altieri (also a contributing editor to Catholic World Report), details some of these problems and suggests possible remedies to cultivate open dialogue, objective journalism, and a better reader-reporter relationship.

While compact and relatively short, Reading the News tackles a broad area of questions relating to today’s news media. Altieri preempts his discussion of the topic by noting that many of the things covered nowadays include bad things. Modernity is faced with minute-by-minute reportage of evils occurring in the world at large. That, truth be told, is a reality that can’t be avoided though one which, as the author later explains, may merit abstinence from – for sanity’s sake.

Stepping back from the inundation of digital media coverage can be helpful on a number of spiritual and psychological levels. Either via the bias through which the news is fed to us or because of the newsworthy events themselves, the wild fruits of underhanded journalism have the capacity to insight anger, fear, distrust, and confusion. Inevitably, these lead us away from the truth.

Certainly, in the U.S. for instance, the journalistic influence can be traced to an increasingly polarized atmosphere. And this stringent divide is not only noticeable in politics but in Catholicism as well. “The polarisation of discourse in the Church,” writes Altieri, “has grown sharper and more intense.”

Even amid such troubling times, Altieri reminds his readers that hope is not stamped out. Living “in the world while not being of it requires that we be able to see clearly how bad things are, without losing sight of the good.” This is a message propounded by numerous saints: It’s simply unhealthy to focus on all the bad things and neglect the good.

With a splendid dash of common sense to top off his confrontation with this issue, Altieri presents a simple “dietology” for media consumption. Fasting, he suggests, would be optimal if doable. Better yet is cultivating a diet unique to one’s realistic needs. Otherwise, if no curbs are put in place, unchecked media exposure can lead to anxiety or further mental health crises down the line. We can quickly “be overwhelmed”, just as the Pope said.

This isn’t to say, however, that one’s media diet should consist of one-sided media. That would be like constricting one’s nutritional diet to only red meat or just grains and nothing more. Variety, in this sense, Altieri takes to be virtuous. Whereas bias blinders are dangerous. It’s best,

that none of us be quick to blame the people on the other side of the issue – whatever it is – or be too willing to give ‘our’ guys – whoever they are – a pass. The temptation to do both is always there, and it will always prove fatal to reform efforts.

This call-to-action suggests that everyone, whether reporter or casual news reader, ought to approach a story critically either in the telling of it or in the reading/watching of it. As Altieri explains, being open to the ideas of others, and having a willingness to subject one’s own preconceptions to ridicule, is the only real way of coming to the truth, of seeing beyond the haze of voices and noises all vying for attention.

As far as a journalist is concerned, this rule manifests itself in a professional impartiality, meaning he should deliberately avoid a biased twist in relating the words and actions of others to the public. This aspect of the journalistic function is in some sense similar to Marian intercession.

The Blessed Virgin Mary is, like her Son, a servant with a message to share. At the same time, her extraordinary humility tempers how she presents that message. At the wedding feast at Cana, Mary doesn’t per se force faith upon those she intercedes for. She simply directs their attention to Jesus, certainly a newsworthy figure!

Mary represents Someone. She has the Word of Another entrusted to her; she shares with us the Word of God made flesh. Yes, in this instance, Mary literally tells those who are in need, “Do whatever he [Jesus] tells you” (Jn 2:5). But at the end of the day, those who listen to her, and to the Word of God, decide whether to abandon Christ or submit to an act of faith. It is this relationship between Jesus and others that leads us to hail Mary as our “Mediatrix.”

Likewise, the journalistic role is one of mediation, one in which the truth should be highlighted and delivered to the public. Journalists then are servants also. To strive for as little bias as possible requires the virtue of humility and dedication to the truth. And, like Mary, we present the words of others while simultaneously permitting our audience to decide for themselves what is right or wrong in the actions we report on.

In other words, the reader should get to decide which party within the story merits applause or which merits discredit. If a story is peddling a narrative or is intertwined with an editorial slant, then the story is not being honest with the public; it’s discoloring what happened to fit it within various ideological parameters.

So journalists, like anyone, might do well to look to the Blessed Virgin Mary as intercessor and exemplar. St. John the Evangelist did so, and he was one of the most prolific writers of the New Testament. Journalists would greatly profit by taking the words of Isaiah to heart: “Woe to those who decree iniquitous decrees, and the writers who keep writing oppression…” (Isa 10:1). Words, after all, do carry weight.

Altieri’s booklet outlines many other crucial topics relating to the modern media field such as the relationship between the Church and the media and how that relationship has evolved, citing instances such as the sexual abuse crisis and the frequent mistranslation or out-of-context usage of Pope Francis’ words. He also provides a rough outline of the true journalistic standards of storytelling as well as a few pointers for discerning stories that the average layperson comes across, particularly ones relevant to Catholics that appear in secular outlets.

Reading the News without Losing Your Faith is a superb reader’s primer and a journalist’s reminder on how to be critical and diligent in approaching the news.

(Note: All Scripture quotes are taken from the English Standard Version, Catholic Edition of the Bible.)

About John Tuttle 3 Articles
John Tuttle has a BA in journalism & mass communications and theology from Benedictine College. He is a lover of truth and beauty. His writing has appeared or is forthcoming in Tablet Magazine, The Wanderer, Catholic Insight, Franciscan Media, The University Bookman, Homiletic & Pastoral Review, and others.