In honor of the feast of Our Lady of Guadalupe, I decided to rewatch Alfonso Cuarón’s semi-autobiographical film Roma. Many reviewers have highlighted the connection between the main character Cleo (based on Cuarón’s childhood nanny) and the Virgin Mary. Watching the film for a third time helped me to pick up on more of its many small, subtle details. 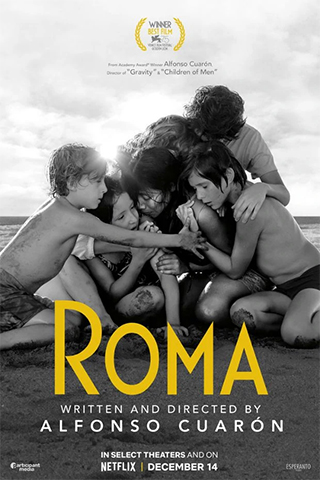 The meekness and humility of figures like Cleo and Mary can be easily written off as weakness or powerlessness in the eyes of the world. But Roma’s Marian (specifically Guadalupana) themes would indicate otherwise.

Our Lady’s appearance to St. Juan Diego reveals her attentiveness to the oppressed, forgotten, and marginalized. The result was the flowering of faith amongst both the indigenous and creole communities. Her capacity to generate new spiritual vitality began precisely through her fidelity to the particular, in this case to Juan Diego and to Aztec culture (witnessed by the design on her mantle). Though her devotion eventually spread throughout the whole world, it all began not with a feat of power, but through her attentiveness to the particular and willingness to “stay with” the other.

Similarly, Cleo’s attentiveness to the particular, her capacity to “stay with” the children of the family she works for, are what allow her to emerge as the quiet hero toward the end of the film and become the source of hope and redemption for the other characters.

Cleo’s social status already calls into question her strength. She’s a poor indigenous woman working as a nanny for a wealthy white family. Though the family treats her kindly and respectfully (most of the time), she assumes a submissive attitude when interacting with them–alluding to the deep-seated classism and colorism in Latin American countries. She has a deep affection for the family’s children, especially the youngest boy, gently singing them lullabies as they fall asleep. Her proximity to the kids hints at one of her many hidden inner strengths that emerge throughout the film…strengths that the others seem to underestimate. Though the parents live in bourgeois comfort, their marital problems distract them from the kids’ real needs.

Yet another of Cleo’s hidden strengths is her general quietness. She rarely speaks, and when she does, she does so quietly and with few words. In these moments of quiet, Cuarón places emphasis on Cleo’s eyes, as if to say, she may not say much out loud, but it’s her gaze, her attentiveness to the small details, that speaks most loudly. This cinematographic technique is reminiscent of Pierpaolo Pasolini’s silent close ups on the faces of his characters in The Gospel According to Matthew. The scene in which Mary tells Joseph of her pregnancy is communicated almost solely with their eyes.

We then meet Fermín, the cousin of her fellow nanny’s boyfriend. Fermín trains in martial arts with a paramilitary group in the countryside. Before they have sex, he tries to show off his sword-wielding skills, much to her amusement. He abandons her after she tells him she is pregnant with their baby.

She later tracks him down while he’s practicing martial arts with Professor Zovek, a kind of celebrity martial arts guru whose character is based on a real person. Zovek challenges the men to attempt an “impossible feat” that “only the Lamas, martial-arts masters, and a few great athletes have been able to master”: balancing on one foot with one’s eyes closed and arms raised above the head. It seems that Zovek and Cleo are the only ones able to pull it off, once again hinting at Cleo’s inner strength that fools those using “wordly logic.” Afterward, she tries to convince Fermín to stay with her and help raise the baby, only for him to deny he is the father and threaten to attack her.

This scene juxtaposes Fermín’s strength through violence with Cleo’s strength through vulnerability. Cleo’s pregnancy makes her dependent. And although Fermín may flaunt his strength and independence, his attitude toward her conceals his inner weakness. Clearly, he’s afraid of paternity, of staying with Cleo and making sacrifices for his child. This is not completely his fault. Fermín has been oppressed. As an indigenous, economically disadvantaged man living in the countryside, he’s been emasculated…cut off from meaningful work opportunities and thus rendered less capable of serving as a husband and father. He attempts to take back his masculinity by flocking to populist a militaristic ideology, but even that can’t provide him the strength to take up the responsibilities of fatherhood.

Later, Cleo and Doña Teresa, the family’s matriarch, go out to shop for a crib. As they approach the department store, they have to pass through student protestors (the scene is based on the 1971 Corpus Christi Massacre). The store is then raided by counter protestors, among whom is Fermín, who stares as Cleo momentarily and then runs away. Quickly after, her water breaks and Doña Teresa rushes her into a taxi to get to the hospital. Traffic prolongs the trip there, and Teresa starts desperately fingering through the rosary as she attempts to console Cleo, who is writhing in pain.

After several attempts to revive the baby, she is pronounced a stillborn. Cleo sobs as she embraces her daughter’s body, in a manner reminiscent of the Pieta. Things go further down hill when the father of the family, who has been cheating on his wife Sofia for quite some time, decides to leave. Sofia takes the whole family out on a trip to the shore before breaking the news to them.

While at the beach, the kids invite Cleo to come into the ocean with them. She said she would, but she can’t swim. After venturing off too far the kids start drowning–and Cleo seems to be the only one who notices. Her love for the kids compels her to risk her life and rush in to rescue them. They emerge out of the water, and the whole family runs to embrace Cleo.

“Cleo saved us,” proclaims the daughter.

The scene alludes once again to the Pieta, but this time, the embrace between sorrowful mother and child has expanded to include a wider embrace of communion. The light of the setting sun cracks through their huddled bodies as if to say: salvation and regeneration are born through the sorrowful mother, the attentive mother.

Many reviewers have also pointed out how the scene alludes to the theme of baptism, of spiritual death and rebirth through water. After the death of Cleo’s daughter, and the emotional death of the family now that the father is gone, they emerge out of the water strengthened by the love that is embodied within their embrace. The ability to begin anew is impossible without this type of communion.

The other characters chase after false prophets of power and strength, seek liberation through political ideology, and attach themselves to a bourgeois ideal of comfort and material wealth–but none of these things last. Cleo is a witness to the claim that “the meek shall inherit the earth.” If anything is to last, to generate hope and newness, it must begin with attentiveness to the particular. In this way, Roma keeps the message of Guadalupe alive for the 21st century, maintaining the promise of Mary’s love through Mexico’s indigenous population.

It’s easy for those looking at her through the eyes of “the world” to write off her quietness and meekness. And we ought not ignore nor glamorize the systemic social inequalities that inform much of the dynamic between Cleo and the other characters. But even this considered, it is Cleo’s love that leaves her as the last woman standing at the end of the film, emerging as the hero. It is through this that she uplifts the rest of the characters and generates a possibility of hope and redemption after suffering.

About Stephen G. Adubato 11 Articles
Stephen G. Adubato studied moral theology at Seton Hall University and currently teaches religion and philosophy in N.J. He also is the host of the "Cracks in Postmodernity" podcast.