New Hampshire’s 2021 budget includes a limit on late-term abortions, a significant change from current policy which allows abortions up to the point of birth.

The Fetal Life Protection Act limits abortions in the state to the first 24 weeks of pregnancy, unless the life, health, or well-being of the mother is endangered. The act makes performing an unauthorized abortion a class B felony, with fines ranging from $10,000 to $100,000. New Hampshire currently has no gestational age limit on abortions.

The $13.5 billion state budget bill, which includes the Fetal Life Protection Act, was signed into law by Gov. Chris Sununu (R) on June 25. The pro-life provisions go into effect on Jan. 1, 2022.

The two Republican state senators who introduced the act, Regina Birdsell and Sharon Carson, explained the rationale behind the provisions in a July 20 op-ed in the Portsmouth Herald.

“For too long, we were among a small group of states that provided no protection for unborn children until the moment of birth,” the senators wrote.

Under the bill, anyone seeking an abortion would be required to have an ultrasound first. The senators defended that provision as “routine,” and argued that most abortion clinics already perform ultrasounds to determine an unborn baby’s age.

In addition, the bill requires medical providers to file a report to the New Hampshire Department of Health and Human Services each time an abortion is performed after 24 weeks due to a medical emergency.

New Hampshire is currently one of seven states that has no gestational limit on abortions, New Hampshire Public Radio reported.

“We are proud that New Hampshire has finally become the 44th state to finally protect infants in the 7th, 8th, and 9th month of pregnancy. This is long overdue,” Birdsell and Carson wrote.

“Voters have consistently and overwhelmingly supported limits on abortions in the third trimester. They oppose an extreme pro-abortion agenda without any limits up to the moment of birth,” they said.

A poll from The Associated Press-NORC Center for Public Affairs Research suggested that a majority of Americans believe that abortion should be illegal in most or all cases after the first trimester.

Most states limit abortions at 18 to 22 weeks gestation, the senators noted.

“Those who support abortion until birth object to any and all protections for the unborn…we’re hearing that this late-term abortion law is extreme, even though it’s already in place in 43 other states,” the senators wrote.

Some of the those states with no gestational limits, such as Colorado, have become havens for late-term abortion doctors who accept patients from all over the world. Data from a prolific late-term abortion doctor in Boulder, Colorado suggest that many abortions performed late in pregnancy – some of which are performed as late as 38 or 39 weeks – are due to conditions such as Down syndrome.

The U.S. Centers for Disease Control and Prevention (CDC), in its most recent report on abortion in the United States, estimated that 92% of abortions in 2018 were performed within the first 13 weeks of pregnancy.

The CDC data suggests that abortions after 21 weeks gestation make up only 1.2% of all abortions performed in the United States, and are thus “extremely rare.” However, that CDC data excludes information from some states such as California, Illinois, New York, and the District of Columbia.

More than six-in-ten, 61%, Americans believe that abortion should be legal in most or all circumstances in the first trimester of pregnancy, according to the AP/NORC poll.

Catholic college contingents head to the March for Life 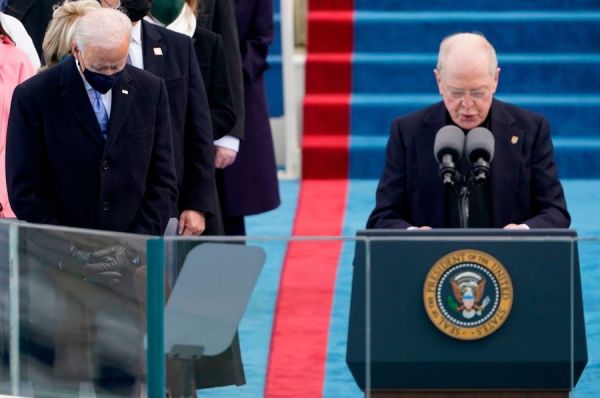 Here is the full text of this invocation prayer:

Gracious and merciful God, at this sacred time we come before you in need – indeed on our knees. But we come still more with hope, and with our eyes raised anew to the vision of a “more perfect union” in our land, a union of all our citizens to “promote the general welfare and secure the blessings of liberty to ourselves and our posterity.” We are a people of many races, creeds and colors, national backgrounds, cultures and styles – now far more numerous and on land much vaster than when Archbishop John Carol wrote his prayer for the inauguration of George Washington 232 years ago. Archbishop Carol prayed that you, O creator of all, would “assist with your Holy Spirit of counsel and fortitude the President of these United States, that his administration may be conducted in righteousness, and be eminently useful to your people.” Today, we confess our past failures to live according to our vision of equality, inclusion and freedom for all. Yet we resolutely commit still now to renewing the vision, to caring for one other in word and deed, especially the least fortunate among us, and so becoming light for the world. There is a power in each and every one of us that lives by turning to every other one of us, a thrust of the spirit to cherish and care and stand by others, and above all those most in need. It is called love, and its path is to give ever more of itself. Today, it is called American patriotism, born not of power and privilege but of care for the common good – “with malice toward none and with charity for all.” For our new president, we beg of you the wisdom Solomon sought when he knelt before you and prayed for “an understanding heart so that I can govern your people and know the difference between right and wrong.” We trust in the counsel of the Letter of James: “If any of you lacks wisdom, you should ask God, who gives generously to all without finding fault, and it will be given to you.” Pope Francis has reminded us “how important it is to dream together… By ourselves,” he wrote “we risk seeing mirages, things that are not there. Dreams, on the other hand, are built together.” Be with us, Holy Mystery of Love, as we dream together, to reconcile the people of our land, restore our dream, and invest it with peace and justice and the joy that is the overflow of love. To the glory of your name forever. Amen.

Who is Father Leo J. O’Donovan?
Father O’Donovan is a Catholic priest, known as a friend of the Biden family. He was the main celebrant at the funeral Mass for Joe Biden’s son Beau who died in 2015 after battling cancer. He was 46 years old. Beau was the eldest son of Joe Biden and his first wife Neilia Hunter Biden, who also passed in a car crash in 1972 with their infant daughter Naomi Biden.