The civic holiday the United States celebrates today is entirely in keeping with Catholic sentiment. Father’s Day has its origins in the work of Sonora Smart Dodd who back in 1910 was able to convince the Spokane Ministerial Association and the local YMCA chapter in her native Washington, to set aside a Sunday in June to honor fathers. 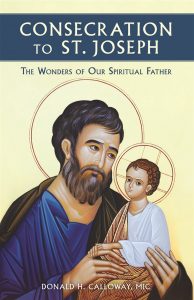 This widely publicized event resonated with the rest of the nation and it began to spread. In 1924, President Calvin Coolidge exhorted Americans to celebrate Father’s Day in words that sound as if they could have come from a papal encyclical: “…to establish more intimate relations between fathers and their children and to impress upon fathers the measure of their obligations.” In 1966, President Lyndon Johnson signed an executive order that the holiday be celebrated on the third Sunday in June and finally, under President Richard Nixon, Congress passed an act officially making Father’s Day a national holiday in 1972.

This civic holiday is more important than ever as the moral fabric of our nation continues to erode, with ever-increasing confusion about the true nature of sex, marriage, and family. We need holy men today, especially fathers. In Catholic Europe, the day set aside for honoring fatherhood has been celebrated for centuries fittingly on March 19th, the Feast of St. Joseph.

Recognizing the need for the spiritual fatherhood of St. Joseph in these dire times, Fr. Donald Calloway published an excellent book on this subject earlier this year titled Consecration to Saint Joseph: The Wonders of Our Spiritual Father.

Fr. Calloway currently serves as a vicar provincial and vocations director for the Mother of Mercy Province of his religious community, the Marian Fathers of the Immaculate Conception. He is a sought after speaker who has written over a dozen books and leads pilgrimages to Marian shrines around the world.

He spoke recently with Catholic World Report about his new book about St. Joseph.

CWR: Your past work in speaking and writing has focused so much on spreading devotion to Our Lady. Why has your attention now turned to fostering devotion to St. Joseph?

Fr. Calloway: In essence, I want to bring to people’s attention to all that the Church has been doing to promote St. Joseph in recent times.

Needless, to say the Holy Trinity is really trying to bring our attention to St. Joseph in a major way.

CWR: You recount in your book how Saint José Manyanet prophesied that a “time of St. Joseph” would soon arrive in the life of the Church. Why do you believe that time is now?

Fr. Calloway: We need St. Joseph today more than we have ever needed him before. In fact, long before St. Jose Manyanet prophesied about a “time of St. Joseph,” the 16th century Dominican priest, Isidore de Isolanis, prophesied that in the future the Church would be going through a very difficult time, but a great victory and renewal of the Church would take place when the Church fully acknowledged and proclaimed the greatness of St. Joseph.

In my opinion, we are living in these prophesied times and we need St. Joseph today for two very specific reasons:

1) The entire world needs to be re-evangelized, including countries that were once established on Judeo-Christian principles. St. Joseph served as the first missionary by taking Jesus to Egypt. We need him today to renew the Church’s missionary and apostolic mandate.

2) Marriage and family are under attack like never before. Most countries have sought to re-define marriage, and entire societies and education systems are plagued with gender ideology. Sadly, the Church herself has allowed much of this spiritual poison to infiltrate her ranks. What better person to turn to for heavenly aid than the Head of the Holy Family, the Pillar of Families, the Glory of Domestic Life, the Patron of the Universal Church, and the mighty Terror of Demons!  Now is the time to bring St. Joseph onto the battlefield!

CWR: What is a consecration? What does it mean for a person to be consecrated to St. Joseph?

Fr. Calloway: It basically means that you acknowledge that St. Joseph is your spiritual father, and you want to be like him. To show it, you entrust yourself into his paternal care so that he can help you acquire his virtues and become holy.

Consecration to St. Joseph means you make a formal act of filial entrustment to your spiritual father so that he can take care of your spiritual well-being and lead you closer to God. The person who consecrates himself to St. Joseph wants to be as close to their spiritual father as possible, to the point of resembling him in virtue and holiness. Saint Joseph, in turn, will give to those consecrated to him his undivided attention, protection, and guidance.

CWR: How does your book prepare the reader to make this act of consecration?

In addition, the daily readings include what saints, popes, and mystics have written and/or stated about St. Joseph. To date, Consecration to St. Joseph is the most comprehensive program of its kind. Honorable prelates such as Cardinal Raymond Burke and Bishop Athanasius Schneider have given their full endorsements. For those who are interested, a website has been developed that covers the basics of the program, offering a consecration chart, as well as all the endorsements from notable and orthodox Catholics. The website is: www.consecrationtostjoseph.org.

CWR: Why should fathers be especially devoted to St. Joseph?

Today many men are confused about what it means to be a man, a husband, and a father. Addictions to pornography and entertainment (especially sports) have consumed the lives of men around the world. Furthermore, for those who want to try and break free of the cycle of cultural brain-washing, education and career systems have been put in place to beat down any traditional understanding of strong male leadership, determining and classifying traditional manhood as toxic. This has left many men feeling emasculated and adrift in a society that views their fatherhood and leadership as dispensable.

We need St. Joseph to serve as the model for men (fathers, husbands, and clergy) today. From St. Joseph they learn to be servant leaders, sacrificial and chivalrous men not afraid to confront the darkness, slay spiritual dragons, and combat the politics of death.  If St. Joseph is the Terror of Demons (and he is), all men are called to resemble him and also be a terror to the forces of evil. Ite ad Ioseph! Go to Joseph!

About Father Seán Connolly 63 Articles
Father Seán Connolly is a priest of the Archdiocese of New York. Ordained in 2015, he has an undergraduate degree in the Classics from the College of the Holy Cross in Worcester, Massachusetts as well as a Bachelor of Sacred Theology, Master of Divinity and a Master of Arts in Theology from Saint Joseph's Seminary in Yonkers, New York. In addition to his parochial duties, he writes for The Catholic World Report, The National Catholic Register and The Wanderer.

An Open Appeal to the Catholic Bishops of the World

Only fraternal episcopal interventions can now hope to avert what is sure otherwise to be a spiritual catastrophe for the Catholic Church. […]