The composition of didactic fiction is a risky undertaking. Plots, characters, and the setting of scenes can easily become tools with which a writer makes his points pure means rather than subordinate ends that in part serve a didactic purpose, in part exist as art for the sake of art. Using fictional or dramatized individuals and incidents purely as demonstrative examples of virtues or vices or personality types or attitudes is the approach appropriate for parables and lectures rather than for narrative poems, plays, short stories, and movie and television scripts. 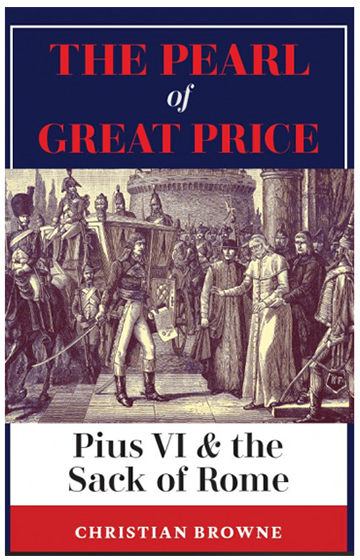 Tendencies towards such one-sided didacticism is among the chief reasons why contemporary literature is in such a sorry state, with many of those now writing feminist literature and post-colonial literature and gay literature and, yes, Christian literature paying scant attention to the “literature” side—to the artistic side—of what they are trying to do. And I don’t mean that such authors are merely choosing lighter (or “entertaining”) over more highbrow (or “artistic”) approaches to writing. The problem is the abundance of didactic writers who utterly fail to write “artistically light” fiction well—not to mention those who aim to be didactic highbrows and fall far short of their professed artistic goals.

It is, therefore, always a pleasure for me to find explicitly Catholic contemporary literary works that can impress at the artistic level, particularly when, as in the case of Christian Browne’s The Pearl of Great Price: Pius VI & the Sack of Rome, it not only takes the form of the now less common genre of a play but is one of the better Christian didactic plays written in English since the death of T. S. Eliot.

One reason for Pearl‘s success, a reason that might seem ironic, is the fact that it doesn’t try to hide its didactic purpose behind a veneer of apparent ordinariness. Literary didacticism can succeed aesthetically when the writer pushes it to center stage, as in Robert Bolt’s A Man for All Seasons, and then focuses on the artistic presentation of his themes. It can succeed when it pops up almost incidentally, here and there as one aspect of characters’ lives while remaining out of sight most of the time, as in Evelyn Waugh’s Sword of Honor Trilogy. But it cannot succeed when it is central to a work that nevertheless wanders off into gratuitous subplots and incidents intended to make the characters and their lives seem “ordinary” or “relatable” to readers or viewers.

Pearl‘s stylistic use of language is the other notable reason for its success, and a characteristic of higher art missing even from most of the good contemporary Christian didactic fiction, and, indeed, from most good contemporary fiction. John Dryden once remarked that the best poetry—because the most easily understood—is that which approaches as close to prose as it can without crossing over to it. On the other side of that line we can add that the most artistic prose is that which comes similarly close to poetry. Browne’s writing demonstrates the latter tendency, and has the same type of elevated, noble quality one finds in Bolt’s dramatization of the life of Saint Thomas More and that contributes to the creation of an atmosphere of great events involving great men within which a didactic emphasis can easily feel at home rather than forced and artificial, crammed into a (frequently artificial) take on “ordinary life.”

Browne’s concerns, however, are notably different from those of Bolt. Though More’s Catholicism is essential to his story, Bolt was not interested in holding him up as a model of specifically Catholic or even Christian virtue but as a man of principle in the broadest sense, one who would live in accord with his beliefs regardless of the cost in material, worldly terms. Browne presents a conflict between adherents of rival principles, between the truth of Catholicism and its negation by ideologies that want to make man into a de facto god, not simply exalting his happiness as the measure of all things but insisting that his arbitrary will not be restrained by any intermediaries between him and the divine being whose existence (in some basic sense) is not denied—ideologies whose adherents are consumed with hostility, ideologies devoid of Christian charity.

It is in this context that Brown addressing one increasingly pressing issue—the freedom of the Church, particularly the complete political freedom of the papacy inherent in the pope’s status as head of (now) an independent Vatican City or (in the time of Pius VI) of the Papal States. The play, as a matter of historical realism, naturally presents a pope concerned to preserve the latter territories in a way that may seem irrelevant following the 1929 Lateran Treaty. In fact that document secured the principles Pius articulates by recognizing the Holy See’s rule of a politically independent state free from all other governments in this world. It is a point on which Saint John Paul II was not only as “traditionalist” as Blessed Pius IX. He was also considerably more successful at putting the “traditionalist” view into practice, at using his status as a temporal ruler for the benefit of the Church and of humanity, at showing how (properly understood and properly used) the temporal authority of the pope is (as Pius VI explains in Pearl) an instrument in the hands of Christian charity rather than a distraction from it.

Certain emphases of Pearl could even have been written with John Paul in mind. Pius VI’s theoretical reflections on the way true religion preserves true human freedom and on how the papacy’s political independence facilitates this finding a practical manifestation in the role John Paul played in pulling down communist tyranny in Europe by taking full advantage of his unique combination of roles as earthly head of Christ’s Church and temporal ruler of a state maintaining full diplomatic relations with governments throughout the world.