CNA Staff, Nov 2, 2020 / 04:35 pm (CNA).- A California priest who was excommunicated after denying the legitimacy of Pope Francis has been laicized, according to a Nov. 2 letter from his bishop. The priest has also been accused of sexual coercion and manipulation, prompting Bishop Jaime Soto of Sacramento to call priests to a day of fasting and reparation for the sins of clerical sexual abuse.

“On September 10, 2020 the Holy Father, Pope Francis, granted the personal request of Fr. Jeremy Leatherby for a return to the lay state and a dispensation from the promise of celibacy…. Mr. Jeremy Leatherby was informed of the Holy Father’s decision on Tuesday, October 27, 2020. Mr. Leatherby no longer has any responsibilities or rights proper to the clerical state. The Catholic Faithful are admonished not to participate in Mass or any further sacraments attempted by him,” Bishop Soto wrote in a Nov. 2 letter.

“I continue to regard Benedict as retaining the Office of Peter, as mysterious as that might be. Therefore, I do not regard Bergoglio as the Supreme Pontiff of the Roman Catholic Church,” Leatherby wrote in August, explaining that he also continued to celebrate Mass in public settings, despite a prohibition from his bishop against doing so.

In the same month, Soto announced that “by his words and actions” Leatherby was “in a state of schism with the Roman Catholic Church.”

The bishop declared that the priest had incurred a latae sententiae excommunication, after which Leatherby said he planned to petition for laicization, acknowledging that he is no longer “in union with the church over which Bergoglio reigns.” The priest said that he would “live out my priestly promises independently.”

Leatherby’s laicization likely brings to a halt the canonical trial against him related to allegations of sexual coercion and manipulation.

In March 2016, the priest was removed from ministry at a Sacramento parish, amid allegations that he had engaged in an inappropriate sexual relationship with a woman at the parish. He was prohibited from public ministry and his sacramental faculties were withdrawn.

The priest said in August that “I violated boundaries in ways with that woman.”

Leatherby is accused of violating the trust of women for whom he served as spiritual director, and of committing acts of abuse in that context.

While the diocese says it initiated a canonical trial against the priest in 2016, it did not reach a verdict before Leatherby requested laicization, bringing the trial to a conclusion. Soto’s Nov. 2 letter lamented that fact.

‘The woman who brought the initial accusation and her family have suffered more than has been revealed. Along with her testimony, other accounts of the silent suffering of women have been laid upon my heart,” Soto wrote.

The bishop added that while the canonical trial did not come to a resolution before Leatherby requested laicization, he believed the priest had indeed acted inappropriately.

“Over time, I came to a moral certitude that the alleged prohibited behavior against the sixth commandment had transpired in the case of the accuser as well as with other adult women,” Soto wrote.

“I am ashamed that a brother priest abused the sacred trust of vulnerable women. It is disturbing that he has now placed himself outside of any ecclesial accountability,” the bishop added.

“I must own and atone for the wounds that have been inflicted. I am sorry that vulnerable souls were abused. Their trust was betrayed. Their confidence in the Church’s saving grace was shaken. Their anguish requires respect, care and contrition from me.”

In response, Soto called for priests to “join me in offering a day of reparation for the sins of clergy abuse on Friday, November 6, 2020. Fast on that day, if able to do so. Offer a Votive Mass of the Sacred Heart of Jesus. Pray for the victims of clergy abuse asking for God’s merciful healing upon them. Let us also pray for one another that we may generously, chastely and joyfully exercise our priestly duties for the good of the Church and the glory of God. The Faithful are welcomed to join with the clergy in this act of reparation,” he wrote.

“My brother priests and I belong to the priesthood of Christ Jesus in communion with our Holy Father, Pope Francis. We are the stewards, not the owners, of this divine treasure. This priesthood exists only to serve Christ and His Church. In response to scandals that have troubled this local Church, our own humility, accountability, and personal sacrifice must be the remedies we offer to the People of God in the Diocese of Sacramento.” 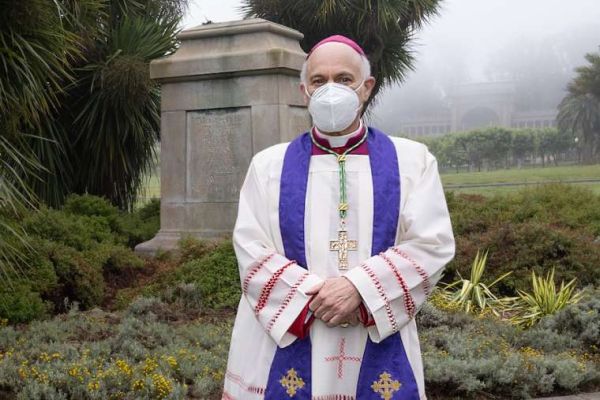 In a letter to San Francisco’s Mayor London Breed and other city officials, Archbishop Salvatore Cordileone on Monday called on the city’s secular authorities to, “at a minimum, remove the excessive limits on outdoor public worship.”

“Particularly for us as Catholics, attending the Mass and receiving the Body and Blood of Christ in person is the source and the summit of our faith, and we have shown we can celebrate the Mass safely,” Cordileone wrote Aug. 31.

Cordileone called the city’s restrictions on outdoor Masses “a serious deprivation of our rights as Americans under the First Amendment and our spiritual needs as people of faith.”

“San Francisco is the only government in the entire Bay Area that restricts public gatherings to 12 people out of doors. Ours and others’ faith is being treated as less important than a trip to the
hardware store, or a nice dinner out on the patio,” Cordileone stated.

Over the last 14 weeks, the doctors said, approximately 17,000 parishes have held three or more Masses each weekend, as well as daily services, combining to equal more than 1 million public Masses celebrated across the United States since shelter-in-place orders were lifted.

By following public health guidelines, these Masses have largely avoided viral spread. The doctors said in their article that there is no evidence that church services are higher risk than similar activities when guidelines are followed.

“One million public Masses without any [COVID-19] outbreaks demonstrates that it is just as safe in San Francisco as in other parts of the state, such as San Mateo County, to permit large gatherings for outdoor public worship with reasonable safety precautions,” Cordileone commented.

Some parishes in San Francisco, including the Cathedral of St. Mary of the Assumption, have been holding simultaneous outdoor Masses in order to adapt to the 12-person limit.

“Our intention has always been to conform to what we understand to be the City orders and timelines,” the archdiocese said July 2, noting that the city’s orders have been changing throughout the pandemic, sometimes on short notice.

In a July 30 memo, Cordileone exhorted his priests to be as diligent as possible in bringing the sacraments to their people, including celebrating outdoor Masses each Sunday, and providing Confession in a safe manner as often as possible.

Cordileone has pointed out that the city has allowed retail stores to operate at 50% capacity during the same time period that Christians are prohibited from gathering in their churches, even with masks and social distancing in place.

San Francisco has seen numerous street protests in recent months, including one in late June that resulted in the destruction of a statue of St. Junípero Serra by a crowd of about 100 people.

“With regard to outdoor services, you are all well aware that pre-planned and scheduled street protests have been allowed to continue unhindered, while the limit of no more than 12 people still applies to everyone else, including us,” he continued.

“Yet here again, an outdoor worship service is a much safer event than a protest, since the people are stationary, social distance is respected, and the participants are wearing masks.”

The Benedict XVI Institute for Sacred Music and Divine Worship, which provides liturgical resources in the archdiocese, shared a petition Aug. 31 in support of Cordileone’s statement calling for the lifting of restrictions on the Mass.