If only for the sake of accuracy and fairness, the first-person plural pronoun in the title of this book begs definition, since a good many people did see “it” coming over the last four decades. 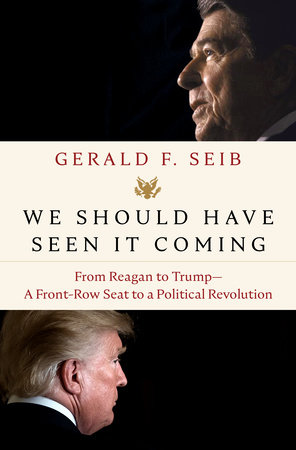 Still more people, including apparently the author (who has spent his career at the Wall Street Journal), did not. The reason, I suspect, is that many of them either didn’t wish to see, or else they feared that to acknowledge the reality developing under their noses would be to encourage it. This could explain why the American political establishment on the right, as well as on the left, vilified Pat Buchanan and Ross Perot in the 1990s to the point where William F. Buckley, Jr. suggested publicly that Buchanan is an anti-Semite. The tactics the Republican establishment brought to bear against Buchanan and Perot to drop the “populist” advance in its tracks were notably the same ones the establishment employed against Donald J. Trump in 2016—in spades.

What worked in 1992 and 1996 failed spectacularly in 2016, owing largely to the pent anger and resentment on the supposed “extreme right” stoked by previous defeats; while the Republican Party, heedless, continued to follow its long-standing tradition of nominating as its presidential candidate the next up of its senior statesmen whose “turn” had come to receive the honor. Thus the carnage that ensued during the debate season of 2016, as Donald Trump serially slaughtered 16 Republican poohbahs to the delight and approbation of the most vital, aware, and active wing of the GOP, and went on to defeat the Democratic Lady Poobah in November.

The chief value of Mr. Seib’s book is not its recapitulation of the history of the Republican Party from Goldwater’s presidential campaign in 1964 down to the present day, useful as that may be in a time when historical memory shortens with every year that passes. It is, rather, its placement of the successive stages of that history in clear perspective—the climactic one especially—as the political movement founded by Ronald Reagan quietly exhausted itself, while engendering and inspiring its opposition on the right.

This, in retrospect, is unsurprising. Reagan was always a conservative Democrat, never really a Republican at all and certainly not a conservative Republican, despite the moderate Republican establishment’s subsequent—but equally temporary—success in getting him recognized by the party as Mr. Republican, including its intellectual wing who should have known better. Too much of it still doesn’t.

Though Seib traces the history of the Republican Party from 1964 to the election of Ronald Reagan in 1980, the heart of his narrative is the erosion and disintegration of the Republican majority that Reagan built in the 1980s, as the optimistic elements of Reaganism gradually succumbed to growing discontent, impatience, pessimism, and finally anger on the Right. These elements included supply-side, free trade, and trickle-down theories in economics; a belief in the economic benefits of mass immigration; and an active and aggressively ideological foreign policy designed and implemented by the neoconservative academics Reagan brought into his administration.

Once Reagan left office in 1989, consensus within the GOP, such as it was, began at once to weaken. Though conservatives approved President George H.W. Bush’s foreign policy, they disliked his domestic agenda, which they thought too liberal, including his decision to raise taxes, something he had explicitly promised never to do during the campaign; his lack of enthusiasm in getting Roe. v. Wade reversed; his support for the Civil Rights Act of 1991 that allowed employees to sue their employers if they suspected they were victims of racial bias; and his determination to put the North American Trade Agreement through Congress.

And so Bush soon found himself facing what Seib describes as two populist challenges: the one, from the right, led by Rep. Newt Gingrich of Georgia (the founder of CSPAN and sponsor of the Contract With America), the other from what he calls the “radical center” whose leaders were Patrick Buchanan and Ross Perot. In this respect, Seib argues, “Bush’s challenges, more than his presidency, were the best indication of what was to come.” Indeed, Rahm Emmanuel believes that “Trumpism” actually began with Gingrich.

The Democratic Convention of 1996 took a hard line on immigration, and President Clinton in his second term moved to the center on crime and other matters. But he was determined to get NAFTA approved, thus ensuring that Buchanan and Perot would run again for President that year—especially after the GOP made the grave error of continuing to adhere to their established policy of nominating their next man up. So Clinton was reelected to the White House. Nevertheless, Gingrich’s efforts to build conservative majorities in an increasing number of states, plus the growing influence of FOX News, Rush Limbaugh, and the National Rifle Association (which had entered national politics in the early 80s), had significantly increased the political power of American conservatives, and conservatism. Still, Seib says, “Conservatives ended the twentieth century not only in need of a new leader, but on the road to some big divides.”

President George W. Bush’s first term pleased many conservatives in many things, including his “compassionate conservatism,” his ban on late-term abortions, and his faith-based initiative. Many of them were less pleased by his No Child Left Behind Program and his inclusion of the cost of prescription drugs under Medicare. It was displeasing to them in other ways as well. In 2000 Bush saw to it that China was admitted to the World Trade Organization under a bipartisan agreement and granted the Chinese permanent free trade status (also a bipartisan move), thanks to the establishment’s erroneous conviction that economic cooperation with Beijing ensured that the People’s Republic would evolve in time into a “normal” bourgeois nation. Bush won reelection in 2004, but only by the narrowest of margins and with the indispensable support of Republican populists and religious conservatives—people Steve Bannon later identified as “nothing but Trump voters.”

Nonetheless, Bush’s response to the attacks of September the eleventh three years before, including the PATRIOT Act, had eroded, as Seib puts it, “conservative ideals;” while the attacks themselves had sharpened anti-immigrant sentiment around the country. The President’s failure to press “immigration reform” through Congress exposed the virulence of popular feeling among the grassroots–another indication, as Seib puts it, that “The Reagan and business-community arguments on immigration had lost their primacy.” President Bush himself, Seib believes, registered the coming seismic change more accurately than anyone. According to Peter Wehner (a conservative activist and at the time the President’s deputy speechwriter), Bush had “a troika of concerns: isolationism, nativism, and protectionism,” all of which he saw building across the country.

In the four years leading up to the election of 2008, the division on the right continued to deepen, and widen. The populist candidate that year, Governor Mike Huckabee, along with the rest of the religious right, distrusted John McCain and wanted fair trade, not free trade. And Tim Pawlenty, then Governor of Minnesota, warned the GOP that it was becoming the “Sam’s Club Party” without its recognizing the fact. The crisis arrived with the coming of the so-called Great Recession and Bush’s decision to bail out the banks, a proposal for which McCain voted.

As a direct result of the popular anger this produced, the Tea Party formed itself via the social media the following year. Further, the passage of the Affordable Care Act during President Obama’s administration alarmed and infuriated the populists, while encouraging Republicans (Seib suggests) to think of themselves no longer as the minority party but the opposition one, while making them more angry, more populist, and less open to accommodation and compromise. Astoundingly, the party chiefs’ fatally misread the situation by nominating of Mitt Romney—“perhaps the least populist man in America”—as their presidential candidate in 2012.

Romney’s subsequent defeat by Barack Obama led directly to what Seib calls “the searing internal debate over immigration that exploded immediately following the election”—the occasion, Seib thinks, when Reagan’s conservatism passed over into the nationalism of Donald Trump. “Immigration brought the party and the conservative movement to a fork in the road. Down one path lay the course the party establishment wanted to follow. Down the other lay what we can call, for lack of a better term, the Steve Bannon/Ann Coulter/Donald Trump choice.”

Indeed, the party’s bosses had to concede that their party’s immigration policy was partly responsible for their loss. Still—incredibly—the subject of trade never came up in the course of the pow-wow. Thus, by 2016, “conservatives were more united by what they were against—progressives and liberals—than what they were for.” In fact, some of those liberals were influential members of the Republican Party itself.

And so Donald Trump, despite the seeming improbability of the thing and the violent opposition of establishment conservatives such as George F. Will, was elected president that year. Trump’s party, Will has charged, “[is]a populist party, and whatever populism is, conservatism isn’t. Populism is the belief that the passions of the people should be aroused and transformed into public policy by a strong leader of the sort who might say, ‘only I can fix it.’ Conservatism, Madisonian conservativism, says passions are the political problem.”

But what are “passions”—and whose “passions” are we talking about? Mr. Will assumes that only mobs can be passion-ridden, as if the elites are incapable of extreme and ungovernable thoughts and feelings—the lust for money and national and global power, for instance. And what would Madison have had to say of an elite, which classical political thought assumes to be the natural conservative element in any society, that turns progressive—even revolutionary?

Gerald Seib thinks that Trumpist conservatism will not depart along with Donald Trump, whether he should leave the White House in 2021 or in 2025. The recent attempt by Democrats to impeach the President has, he claims, served only to encourage the Republican establishment to close quarters with Trump, personally as well as politically. He suggests that Yoram Hazony’s type of national conservatism will move further to the foreground, and cites Christopher DeMuth of the Hudson Institute, who predicts that some conservatives will be willing to use big government to solve big national problems, and Oren Cass, the head of American Compass, who says he is busily engaged “in the process of post-Trumpism.”

My own expectation for the future of populist conservatism in America is that it will be almost wholly anti-intellectual, anti-theoretical, and anti-academic—hence “conservative” only in the sense that it will be fundamentally and viscerally anti-liberal. I can think of worse attitudes and ideas to base a conservative political movement on.

We Should Have Seen It Coming: From Reagan to Trump—A Front-Row Seat to a Political Revolution
By Gerald F. Seib
Random House, 2020
Hardcover, 281 pages

About Chilton Williamson, Jr. 18 Articles
Chilton Williamson, Jr. is the author of several works of fiction, narrative nonfiction, and “pure” nonfiction, including After Tocqueville: The Promise and Failure of Democracy and Jerusalem, Jerusalem! A Novel. He has also written hundreds of essays, critical reviews, and short stories for publications including Chronicles: A Magazine of American Culture, Harper’s, The New Republic, National Review, Commonweal, The New Leader, The American Spectator, among others. You can visit him online at www.chiltonwilliamson.com.