With the nomination of Judge Amy Coney Barrett to the United States Supreme Court the indispensable interpretive methods of original understanding in construing the Constitution and textualism in reading statutes are precisely where they belong: front and center. 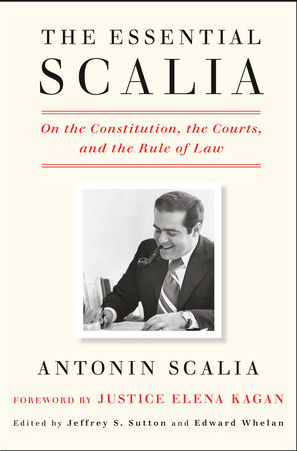 For Judge Barrett, as for all originalists and textualists, there is no more towering figure in the project of getting the Constitution and statutes right than the late Justice Antonin Scalia, for whom Judge Barrett clerked. The Essential Scalia: On the Constitution, the Courts, and the Rule of Law, is a superb new collection of the Justice Scalia’s speeches, writings, and opinions that demonstrates the genuine triumph of original understanding in constitutional interpretation.

“As a practical matter,” Scalia rightly maintained, “there is no alternative to originalism but standardless judicial constitution-making.” This interpretive triumph – a major argument won — is due largely to Scalia’s long and immensely influential tenure on the Supreme Court, where he issued opinions, whether for the Court or in dissent, that were characterized by lucid and memorable prose, rigorous thought, and a sterling wit.

Smartly edited by Edward Whelan and the distinguished federal appellate judge Jeffrey Sutton, both former Scalia law clerks, The Essential Scalia has such seminal lectures as “The Rule of Law as a Law of Rules” as well as other statements of judicial method. Scalia’s emphasis on and reverence for constitutional architecture (“Structure is everything,” he stated in one speech) is appropriately featured, particularly with his dissent in 1988 in Morrison v. Olson. In this case, Scalia rejected the independent-counsel statute as an affront to the separation of powers – a position thoroughly vindicated by the later excesses of this law’s operation. This law was bare-knuckled assault on the Constitution’s structure: as Scalia famously argued, it was a wolf that came as wolf. At the time, Scalia was the only member on the Court who discerned a constitutional flaw in a statute that later became a vexing political problem.

Scalia was aware of originalism’s flaws, but as he argued, “The question is whether it is better than anything else.” Originalism is at its most impressive when confronting such patently results-driven cases involving abortion and same-sex marriage that have no foundation whatsoever in the text or history of the Constitution; rather, they are grounded in nothing more than judicial policy preferences. Scalia’s dissent in Planned Parenthood v. Casey is a a rhetorical and logical masterpiece, demolishing the sham of abortion jurisprudence.

And the more recent fiction of a constitutional right to same-sex marriage is tersely disposed of in Scalia’s dissent in Obergefell v. Hodges: “When the Fourteenth Amendment was ratified in 1868, every State limited marriage to one man and one woman, and no one doubted the constitutionality of doing so. That resolves these cases.” Indeed it does – that is, in a coherent constitutional world where majority opinions are not authored by Justice Anthony Kennedy.

One major danger of originalism is found where a complex, ambiguous historical record is evaluated with an absence of judicial restraint. That is the case in District of Columbia v. Heller (2008), where Scalia’s majority opinion waded into deep and murky historical waters and returned, for the first time in American constitutional history, with an individual right to possess firearms. Moreover, a few years later in McDonald v. City of Chicago (2010) Scalia joined his fellow conservatives in the federalism-nullifying project of incorporating this novel individual right and thus nationalizing it. The final word on obvious policy questions that constitute many gun regulations is now removed from state legislatures and placed under the ultimate control of federal courts. (How does the Constitution speak to, say, the fiercely contentious issue of magazine capacity?) This is originalism operating without the virtue of judicial restraint.

By contrast, in Employment Division v. Smith Scalia faced a dense historical record (which was not really discussed by him in this opinion, though it was in a concurring opinion in a later case, City of Boerne v. Flores in 1997) with restraint and revived a constitutional rule on the free exercise of religion that fettered courts in granting exemptions to generally applicable laws and properly reinforced majoritarianism by leaving the issue to legislatures. This use of restraint when history is a less-than-certain trumpet, rather than the incontinent overreaching of Heller, is precisely what originalism needs in order to avoid detrimental lapses into judicial imperialism.

Scalia put together what is incontestably the most consequential body of jurisprudence in our time, and it will without question have lasting influence. Whelan has, with this volume and Judge Sutton’s collaboration, continued his excellent work of editing and publishing Scalia’s general speeches and essays (Scalia Speaks: Reflections on Law, Faith, and Life Well Lived in 2017) and his essays and speeches on religion (On Faith: Lessons from an American Believer in 2019). This compendium of his jurisprudence is a well-arranged and very accessible entry into the mind of the most formidable constitutional analyst of our time.

The Essential Scalia: On the Constitution, the Courts, and the Rule of Law
By Antonin Scalia.
Edited by Jeffrey S. Sutton and Edward Whelan.
Crown Forum 2020
Hardcover, 334 pp.