The worldview Nick Ripatrazone portrays in Longing for an Absent God: Faith and Doubt in Great American Fiction is sorely needed in these days of social distancing filled with concern that physical closeness could breed infection. The Catholic literary tradition, like its religious traditions, is deeply tactile. As Ripatrazone writes, “Catholicism is an assault on the senses.” Its practices, both inside churches and in the daily lives of the faithful, surround us in the conviction that God is among us—here, now. 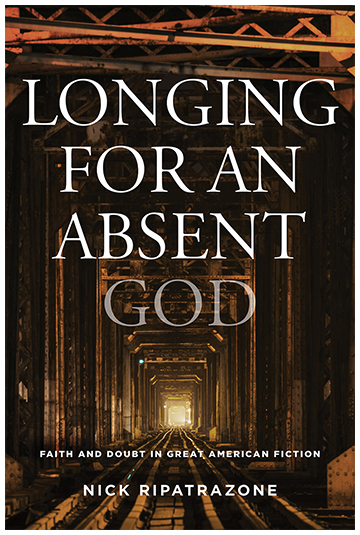 And as this marvelous book shows, even writers who have fallen away from the Faith feel God’s absence. Their fiction is in some cases just as charged with an incarnational sense of God, but they wrestle with the implications of what a world without God, but needing belief, would look like.

Ripatrazone, himself a poet and essayist who has been able to cross back and forth between the Catholic and secular press, has essays here on a number of writers, including Thomas Pynchon, Louise Erdich, and Toni Morrison, who reflect their faith in various ways. He also, quite interestingly, pairs writers—Walker Percy with Andre Dubus, for example, Graham Greene with Flannery O’Connor, or Don DeLillo and Ron Hansen—as a way to explore how those with a living faith differ in their writing from those with vestigial or no faith.

As he writes in comparing the work of Don DeLillo (whose work he describes as “Catholicism without belief”) and that of Ron Hansen (author of Mariette in Ecstasy),  their work would please neither “readers wishing for fully atheistic writing or those craving purely devotional work.” For DeLillo, “the miraculous is artifice. His fiction attempts to manipulate the mysteries of God, to label signs. For Hansen, God is mysterious and complicated, resistant to control.” Ironically, it is the non-believing novelist who is more dogmatic, who wants to control God and life’s vagaries, while the believer inserts into the story an element of mystery and the possibility of the miraculous.

Longing for an Absent God is at the center of two different, but overlapping arguments. The first is whether religious faith in general, or Catholicism in particular, even has a place in fiction. Ripatrazone recognizes that in our contemporary secular world, religious writers receive less serious attention that they once did. Part of this is because the nation once was, culturally at least, more Christian and so religious themes in serious fiction was not unacceptable for elite literary culture. But it was also the case that Catholicism was different. Its images, rituals, and doctrines were a rich source of narrative that appealed to Catholics who grew up in that world as well as those who did not. That relationship has changed significantly, and now even writers of “doubt” are lumped together with the writers of “faith” in attempting to break through to the wider culture.

The second debate is over the role of the Catholic novelist. All the writers in Ripatrazone’s collection would, he argues, qualify, despite the complicated relationship some of these writers have to their faith. They are all Catholic writers, because the Catholic sensibility invades their work. For the lapsed writers, their work “reveals a Catholic milieu, but also a cultural one devoid of any transcendent faith. [but a] discerning reader will notice the vestiges of their former belief.”

The believing writers have different challenges. O’Connor, a literary giant whose style was inimitable, still remains influential in her conviction that believing writers could not be didactic, but had to shock the reader into receptivity toward God. She had little patience for pious fiction; her “messy sermons” were part of a larger understanding of a writer’s role. She thought that in a world without God, the religious novelist had to “bend the whole novel – its language, structure, its action” in a compelling way.

In his last chapter, “Literary Faith in a Secular Age,” Ripatrazone surveys the current crop of younger Catholic writers and sees cause for hope. He notes, rightly, that the sense of Catholicism as a “separate” world waned significantly after Vatican II. The generation of Catholic writers who came of age in the 1980s live in an imaginative world much closer to their Protestant and secular neighbors than those in the golden age of Catholic life, with its close-knit ethnic communities, Latin Mass, and Friday fish frys.

Ripatrazone focuses on Alice McDermott, and Phil Klay, both contemporary writers who are also practicing Catholics. Both have been recognized as significant voices—McDermott’s Charming Billy won the National Book Award in 1989, and Klay’s Deployment, a collection of short stories arising from his military service, in 2014. Both, but especially Klay, are writing for a post-Catholic world and see a need to integrate their faith in a different way than earlier Catholic writers. For Klay, that means (as a character in one of his stories puts it), the writer needs to find a “crack” in the sufferings of others through which to communicate. For McDermott, it is a recognition that the ground spring of her faith and her writing is the astonishing fact that “out of love – love – for such troubled, flawed, struggling human beings, the Creator, the First Cause, became flesh that we, every one of us, would not perish.”

Ripatrazone shows how this message continues to be played out in dialogue between the Catholic writers of faith, and those of doubt.