What can Catholic social thought tell us about how to order our political and economic relationships?

Ever since at least Quanta Cura (1864) and Rerum Novarum (1891), Catholic social teaching has been reacting to and commenting on the “revolutions” that the world has been undergoing, from industrialization to globalization to the rise of finance capitalism and the consumer society. These topics have taken on increased urgency in light of the populist movements sweeping Europe and the United States, which are forcing a reconsideration of the liberal order, at least as it has existed for the last half-century. The current pandemic has only intensified the urgency of these questions. 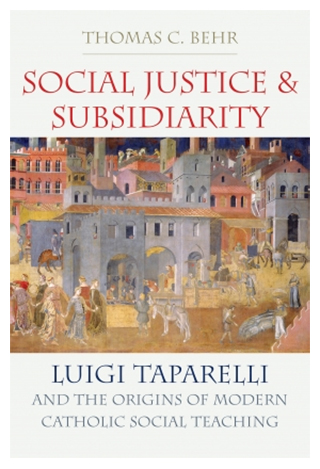 But the English-speaking Catholic world has been somewhat at a disadvantage in these debates. Much of the work surrounding the nineteenth-century social encyclicals is not in English and is hard to find. But terms such as “social justice” and “subsidiarity” have a history, and Thomas Behr recounts part of that history in his important book on Luigi Taparelli, a Catholic thinker who advocated an approach to politics based in Thomistic natural law argument. “Taparelli was the first Catholic theorist to explore the relationships between natural right and subjective rights,” writes Behr, “identifying the origin of the latter in the moral compunction resulting from the former, as applied in concrete social reality.”

Taparelli (1793-1862), an Italian Jesuit, was a co-founder of the Vatican newspaper Civiltá Cattolica and the influence of his work is evident throughout the papal social encyclicals, including his elaborations of social justice and the principle of subsidiarity. His major work, the Theoretical Treatise of Natural Right Based on Fact, has never been translated into English.

Behr places Taparelli between the natural-rights thinkers including Hobbes and Locke on the one hand, and the theorists of democracy such as Tocqueville and Raymond Aron on the other. Looming, of course, in the background were the aftershocks of the French Revolution, just at its height when Taprelli was born and which inaugurated the rise of the secular state, hostile to religious belief. For Catholic social thought, the social contract theorists who divined absolute rights from a state of nature were mistaken.

The Catholic understanding of rights is different because it is based in a different understanding of the person. We do have rights from our nature as human beings, but Catholic thought sees rights as ordered to higher goods. Our entitlement to exercise our rights is bound not just by our historical circumstances and those of our particular society, but also by conscience and “the clarity and utility of a chosen action in relation to the pursuit of the highest good. … The more directly related it is to the highest good, the stronger the claim of right. That is why certain rights are ‘inalienable’ – they are ineluctable requirements of order, of the orientation of the intellect to truth, and of the striving of persons within society for the ultimate good.”

In other words, we have rights in order to do something, not simply to exercise those rights in whatever way we subjectively may wish and desire.

Thus, for Catholic social thought, the political community is not a place where we each enjoy our own individual political goods, protected by a “neutral” state to which we surrender our personal right to violence against others for infringing our rights in exchange for protection in those rights. Rather, “[s]ociety has as its purpose the perfection of the individuals who compose it, a purpose that is the common good of all associations, from the family to the state.”

The role of “associations” is crucial here, and Behr carefully examines Taparelli’s analysis of the concept of subsidiarity. Following Aristotle and Aquinas, Taparelli began with the fact that humans are social creatures. Taparelli was a critic of the “absolutist, centralizing, bureaucratizing modern state” and thought the defense of “lower” associations was both necessary and a part of a just political order. This kind of political structure would protect goods such as religious freedom and private property. But he worked those protections into what he called a “hypotactical society,” which has been rendered as “subsidiarity”.

Subsidiarity first appears in the encyclical Quadragesimo Anno (1931), and it means that more direct forms of association should handle matters within their authority, unless they cannot and must be escalated to a higher authority. This understanding is derived directly from Taparelli’s work and Behr explains how Taparelli saw all associations in a society, public and private, working together for a common good. This principle echoes both the “little platoons” of society described by Edmund Burke, and Tocqueville’s wonder at the varied democratic institutions he saw forming in America. These institutions at their best protect people against rampant individualism—since we have overlapping obligations to our various groups—and statism, since so much can be done at a local or private level. This is also how we should understand social justice, a term that Behr credits Taparelli with coining. It too is ordered to the common good, and empowers each citizen to use their own abilities to “freely exercise their natural rights for the good of each and for the common good of the whole … [and] to more fully pursue their material, moral, and spiritual perfection.”

The nineteenth century saw a number of European Catholic thinkers who worked to ponder and adapt Catholic teaching within modern industrial and political conditions. Behr has provided a welcome and sound introduction to one of the most important.