Like many of you, our Sunday morning was spent, not in a pew, but in our living room, watching Mass on television.

For a few hours on Saturday, it looked as though we might be actually in attendance at a Mass, as Musician Son was told his services would be needed – but then there was a change of mind on that score. Prudence.

My first choice was the Mass to be broadcast from our Cathedral, which I posted about here, but as it turns out, the streaming didn’t work (if you had the Zoom app, it did, but not through YouTube  – the recorded version is here – Mass starts about 12 minutes into the recording), so after a few minutes of staring at the still image from the Cathedral, we moved to something else.

But what? We, like you, had our choice from all over the country – even the world. Famed preachers and internet-famous priests and beautiful cathedrals – we had our pick.

We could have, but we didn’t. It made the most sense to stick close to home, to tune into a Mass from one of the nearby parishes where Musician Son regularly practices, where one of my older sons was married, whose pastor is president of the high school from which another son graduated. To tune into Mass being broadcast from a chapel we know, just down the road and over the hill, prayed by a priest we know.

It was reassuring, and it was a good thing to be connected, not to some far-flung parish out of curiosity or novelty or just because we could, but to the Body of Christ manifest here, in my own community, peaking through a door temporarily closed.

In a difficult, tragic time, we learn things. Forgotten and hidden truths are rediscovered.

Perhaps, in this current moment, one of those teachable moments of which I am so fond, we can rediscover some truths about the Mass. Something articulated by Fr. Matthew Schneider:

Mass has an infinite value in itself. One line of St. John Paul II always struck me regarding Mass, especially when celebrating without a congregation: “The Eucharist is always in some way celebrated on the altar of the world.” (Ecclesia de Eucharistia, 8) Every Mass has infinite value as it is Jesus’ sacrifice represented. Thus, a Mass celebrated without a congregation is still valuable for the whole Church….

…Mass is re-living or re-presenting the passion, death, and resurrection of Jesus. We are called to live the whole Mass and not just treat it an extended intro to Communion. In Mass, we go through the whole paschal mystery. The end of the Eucharistic prayer, also known as the doxology, reminds us of the purpose of the Mass: “Through him, and with him, and in him, O God, almighty Father, in the unity of the Holy Spirit, all glory and honor is yours, forever and ever.”

Of course, whether or not this truth is rediscovered in a broad, fruitful way, depends on those in ministry – those who are getting the word out about opportunities and obligations right now.

I’ve been thinking, over the past couple of weeks, about the novel Mr. Blue by Myles Connolly.

Ninety years ago, screenwriter Connolly published a short novel called Mr. Blue. In a way, as John Breslin, SJ says in this piece – which we used as an introduction to the Loyola Classics version of the novel  – was an alternate-universe Great Gatsby. It tells the story of Mr. Blue, a St. Francis-type figure. The novel has been now republished by Cluny Press, edited and introduced by Stephen Mirarchi of Benedictine College.

In the climax of Blue’s tale of a new world in which even laughter and curiosity had been forbidden by law, a priest, the last Christian, climbs the highest tower in a city of metal and, using hosts made from wheat he has grown himself, offers the last Mass, fulfilling his promise to “bring God back to the earth.” As the government’s forces prepare to destroy the priest high atop the tower using planes and bombs, the priest began to repeat the words of Christ at the Last Super (cf. 1 Corinthians 11:23-2 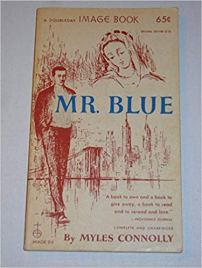 One plane is now low over the roof of the tower, so low that the crew can make out the figure of the cross on the priest’s chasuble. A bomb is made ready…

And now the priest comes to the words that shall bring Christ to earth again. His head almost touches the altar: Hoc est enim corpus meum…

The bomb did not drop. No. No. There was a burst of light beside which day itself is dusk. Then a trumpet peal, a single trumpet peal that shook the universe. The sun blew up like a bubble. The stars and planets vanished like sparks. The earth burst asunder… And through this unspeakably luminous new day, through the vault of the sky ribbed with lightning came Christ as he had come after the Resurrection.

This image of a loan priest standing atop a tower in a burned-out world from which even the most basic expressions of joy, fraternity, and human freedom had been banned is a powerful one. But the power at work here isn’t in the revolutionary act of the priest but in the way we are reminded of the expansive power of the Eucharist.

No, Mass is not cancelled. Not even close. Not even close to one final Mass being celebrated on a mountaintop. Mass is being celebrated today, somewhere in your community, by a priest in a chapel, praying ancient, eternal words over bread and wine, bringing Christ – loving, healing, reconciling – to a broken world. It’s a “private” Mass, yes, and it’s not on the Internet, and there’s no camera.

So it looks as if he’s alone.

(Editor’s note: This post originally appeared on the “Charlotte was Both” blog and appears here with the kind permission of the author.)

About Amy Welborn 13 Articles
Amy Welborn is a writer currently living in Birmingham, Alabama. She is the author of over twenty books on spirituality, saints and history., including the recently released Loyola Kids Book of Catholic Signs and Symbols: An Illustrated Guide to Their History and Meaning. Her website is www.amywelborn.com.