Nathaniel Delaney, the protagonist of Michael D. O’Brien’s Plague Journal—the third novel in a sequence of seven entitled Children of the Last Days—is the editor of a small-town newspaper in British Columbia when the novel begins. But when he writes an editorial questioning the wisdom of euthanasia, he gets hit with a $5,000 fine for committing “hate literature,” and vandals trash the newspaper’s office. So the Swiftcreek Echo shuts down. 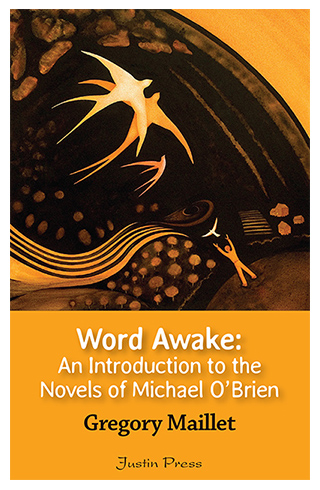 Were we to read about something like that in today’s newspaper, we probably wouldn’t be surprised. But Plague Journal was written in 1999.

O’Brien is not taken as seriously as he should by literary critics—especially, it would seem, in his native Canada—probably because his novels, published by Ignatius Press, are so unabashedly Catholic. Happily, in Gregory Maillet, a professor of English at Crandall University in New Brunswick, he has found a worthy champion. Word Awake is a comprehensive study of O’Brien’s novel sequence, which can fairly be called epic. It covers a lot of time — Strangers and Sojourners, the first in the series (though not the first written) is set in the early 20th century. And it tackles some major events—including the Holocaust and the effect of secularism on our culture and society.

Maillet, the co-author (with David Lyle Jeffrey) of Christianity and Literature: Philosophical Foundations and Critical Practice has no problem with O’Brien’s faith. Indeed, he is consistently insightful regarding the relation of art to faith. In his chapter on Strangers and Sojourners, he notes that “art, even great art, is an insufficient foundation for human spiritual life; art can point to God, or be a ‘bridge to religious experience’ [in the words of Pope John Paul II], but it cannot replace religious life itself.”

This is especially pertinent in the case of O’Brien, who is not just a writer, but also a painter. The covers of his novels always feature one of his paintings. [Editor’s note: A hardback collection of O’Brien’s art will be published in December 2019 by Ignatius Press.]

Thus, with each of O’Brien’s novels, before readers begin with a single word from the page, their soul sees and silently hears a non-verbal word, the Word conveyed through a painting that O’Brien has chosen for the cover of his novel. Invariably, the painting acts as an icon that, like much sacred art, conveys not just a ‘message,’ not just information, but rather an initiation into mystery, in the specifically religious or theological sense of the word: the mystery of divine being that must by definition be beyond the capacity of any human being to know through their senses.

The cover of Father Elijah, for example, the first of the novels that was written, but the fourth in the final arrangement of the series (and its centerpiece), depicts a man wearing the clothes of a Middle Eastern peasant, who tilts his head toward a small cup he is holding. The background is completely black, except for some faint symbols that surround the man: the Star of David, the crescent moon of Islam, a swastika, a hammer and sickle, the Cross. Above them is a dove, symbol of the Holy Spirit, and on the right, “a black panther … ready to pounce upon and try to devour the divine bird.”

Maillet notes that “there is much about the novel not answered by its iconic painting, but readers can be sure they are entering a novel of the twentieth century, as befits a novel published in 1996, and that the novel will test, on some level, the spiritual choices of readers themselves.” This, he says, is especially important given the novel’s subtitle. As O’Brien points out in his preface to the work, “An apocalypse is a work of literature dealing with the end of history.”

O’Brien’s novels tend to be long, often quite long. Strangers and Sojourners and Father Elijah are nearly 600 pages. Eclipse of the Sun and A Cry of Stone are more than 800. Sophia House just falls short of 500. Only Plague Journal and Elijah in Jerusalem come in at less than 300. Three of the novels — Strangers and Sojourners, Plague Journal, and Eclipse of the Sun compose a trilogy by themselves.

So Maillet has his work cut out for him. Amazingly, he has written a book that is every bit as compelling as the novels he is writing about. His explanation of his title gives a clue as to why this is so:

My … title alludes to two crucial concepts in O’Brien’s literary and visual art. O’Brien’s conception of “the Word” largely follows St. John the Divine, whose famous prologue imaged Jesus as “the Word” spoken by the Father before all creation, but O’Brien’s work often reminds us that each individual human being is a “word” spoken by our Father-God. Becoming a “child of God” is not a return to innocence but a grand adventure in which our Father teaches us to more fully understand our identity, so that we become ready to live in the creative harmony of heaven. … The second word in my title, “awake,” follows naturally from the first in O’Brien’s thought because both the divine Word, and human words created by the Divine, awaken believers and prepare them to commune with the Divine in eternity.

Something Pawel Tarnowski, tells the young David Schneider (who will become Father Elijah) in Sophia House echoes this: “I think the important thing here is that you and I have a scrap of evidence that we are not living in a prison universe. We live in a cosmos that has open doors and windows. Messages from the infinite enter from time to time.”

Gregory Maillet has written a book that not only illuminates a grand work of fiction, but is almost as much of a page-turner as the novels it treats. This is not the dry, theory-driven criticism so common these days. It is stylish literary scholarship that engages its subject by means of what can only be called passionate erudition.